I’ve always had an iPad mini around the house, ever since the first generation. And I’ve always treated it very differently than any other iPad.

With the all-new sixth-gen iPad mini, Apple modernized and pushed the tiny tablet forward in a number of ways. But even in following the design trend of the iPad Pro and iPad Air before it, that doesn’t make it any less niche. And that’s part of what makes it so great.

The iPad mini this time around comes in four colors — space gray, starlight, pink and purple. I opted for purple because, to me, the iPad mini is a fun device. Both space gray and starlight felt a bit boring. The pink and purple colors look very subtle, too, but at least they suggest color.

Truthfully, all the colors are varying degrees of silver, each with a suggestion of a hue. I’d love to see other color options, and a bit more saturation across the board. But most people will probably put a smart cover on it anyway, so … ¯\_(ツ)_/¯

As far as connectivity is concerned, for the last few generations of iPads, I’ve always ended up with the cellular model because having the option for a cell connection wherever I go is very freeing. It allows me to stream video, access cloud storage or download books no matter where I am. And now with 5G in the iPad mini, that’s even easier over cellular. For $150 less, you can get the default, Wi-Fi-only model, so consider how much that “always connected” experience is worth for you.

When it comes to storage, I opted for the base 64GB, but you can also upgrade to 256GB for an extra $150. For me, the iPad mini is a much more casual device than my iPad Pro, which I’m using as a computer and working with files. So for the mini, huge amounts of storage don’t seem as necessary. Plus, between iCloud Drive and the Offload Unused Apps setting, I don’t need to keep as many things locally on the device. On top of that, this year’s iPad mini switched from Lightning to USB-C. The new port enables easier connection of external storage devices, if I ever do need to deal with bigger files.

Truthfully, I don’t anticipate needing to deal with big files on the iPad mini, though. And that’s because the iPad mini (as I said at the top) is a very different kind of device. It’s not a workhorse you’d use for editing audio or video, building apps in Swift Playgrounds, or doing your typical productivity tasks.

It’s not that you can’t do those things, because you certainly can — the A15 chip inside the iPad mini does an excellent job of keeping up. But those are not the typical functions of an iPad mini. 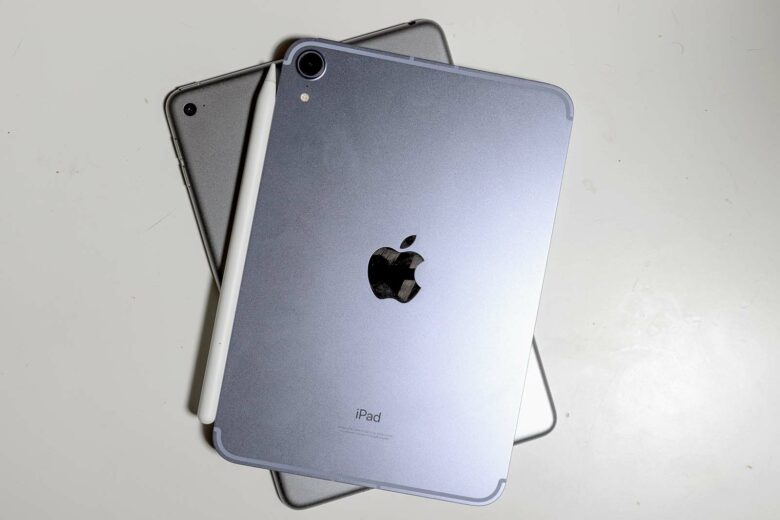 For me and, I suspect, for the majority of iPad mini users in the past, the small tablet was very much a consumption device. That could mean watching video content from streaming services or YouTube, or simply browsing the web, looking at recipes, reading a book, or keeping up with email or social media. It can also be a really solid gaming device if you’re into Apple Arcade.

All of that works so well on the iPad mini because of its compact size. With this sixth-generation version, the physical device is actually a tiny bit shorter than the previous model (though 1mm thicker).

Even with that, the screen size has increased by almost a half-inch, thanks to the slimmed-down bezels and Touch ID sensor moving to the power button. What that means is that the 2021 iPad mini is incredibly comfortable to hold — and small enough to fit just about anywhere.

The iPad mini also now supports the second-generation Apple Pencil. With the advancements in iPadOS 14 and iPadOS 15, the mini can become a fantastic sketchbook or pocketable notebook with features like Quick Notes and Scribble. And with such a compact size, it’s comfortable enough to hold with one hand while writing or drawing with the other. (That proves much more challenging with the larger iPad Air and iPad Pro models.)

The iPad mini now also packs a much-improved pair of cameras. On the back is the same 12MP camera as the iPad Air, which works great for snapping quick photos or scanning documents. On the front, a 12MP ultra-wide camera with support for Center Stage makes the iPad mini great for FaceTime calls.

Another reason the mini is so great is that iPadOS offers the same experience you get across the rest of the lineup. That means that, while the iPad mini may not primarily be a productivity or work machine, if you’re in a pinch and need to get some work done, the mini is up to the task.

It is worth mentioning that doing some of those tasks on the iPad mini can be trickier or more awkward? Unlike the largest 12.9-inch iPad Pro, which feels best in landscape orientation, or even the 10.5-inch iPad Air, which is great in both portrait or landscape, the mini feels best in portrait mode — no question. But when working in portrait, the split-screen multitasking experience is not great, with a pair of very tall, very skinny app windows.

Split View and Slide Over in landscape both feel more usable on the iPad mini. When it comes to text input in those modes, though, the keyboard takes up so much screen real estate that you can barely see the app window behind it. Pairing a Bluetooth keyboard, or using Scribble with the Apple Pencil, are good workarounds, but they require an accessory to make the experience more usable.

Another possible drawback of the mini is the size of on-screen elements. I like to think I have fairly decent vision. But even for me, at times the icons and text on the iPad mini seemed a bit too small. Fortunately, Apple gives you the ability to adjust text size across the entire OS through the Display & Brightness menu in the Settings app. You can also adjust text size either system-wide or on an app-by-app basis using the text size toggle in Control Center.

Is the iPad mini the right choice for you?

If your primary purpose is to get work done, the iPad Pro models are definitely the most ideal iPad experience. They offer the highest storage-capacity options, the most RAM and, on top of that, when working in split-screen, you can essentially fit two portrait-size iPad mini apps side-by-side. They also support the Magic Keyboard and Apple Pencil 2, which allows for maximum screen real estate while interacting with the interface.

If you hope to get an iPad for a little bit of everything, from productivity to content consumption, the iPad Air is a solid device. It’s small enough to be used handheld. It can be docked into the Smart Keyboard or Magic Keyboard. And it also supports the Pencil 2. That said, the Air is still big enough that using it in hand can start to get tiring on your wrists.

A tablet for consumption

The iPad mini, on the other hand, really feels designed for consuming things, not creating them. With iPad mini, you get a tablet that doesn’t bog you down with the need to be a computer. It’s small enough and light enough to hold without getting tired. Using the iPad mini while sitting on the couch or lying in bed is a kind of comfort you can’t get with the other iPad models. It’s surprisingly freeing.

The sixth-generation iPad mini starts at $499 — more than any mini before. It’s only $100 less than the iPad Air, and $170 more than the ninth-generation iPad, putting it in a very strange spot. At that price, you really need to know whether the mini will work for you. To me, the mini feels more like a secondary device to play backup to your main portable computer. If you really aren’t sure, though, here’s one way to think about it.

Brand-new iPad users, or those that aren’t sure if an iPad will work for their needs, are probably best suited to try the entry-level 10.2-inch iPad for $329. It’s not as compact as the mini, and has the older form factor with larger bezels and the Home button on its chin. But it’s an extremely affordable middle-ground iPad — and it’s very versatile.

If you already own another iPad and want something smaller, lighter or more portable, the iPad mini seems like the obvious choice. Additionally, if you’re looking for something to keep on your nightstand, or to use while sitting on the couch instead of your iPhone, but aren’t using it as one of your primary computers, the mini makes a ton of sense.

Lastly, if you read a ton of ebooks or comics, or need an ultra-portable way to take notes out in the field, this iPad mini is an excellent contender.

When you think about it, this gets back to the original point about the iPad mini — it’s unique and niche. It isn’t an iPad for everyone, designed to do everything. Deciding to buy one comes down to knowing what you want or need out of a tiny tablet.

In my time with the iPad mini, I loved the experience. It’s not as serious as the other iPads and feels way more casual than my 12.9-inch iPad Pro. It’s also more enjoyable for reading than the screen of my iPhone 12 Pro.

Ultimately, the iPad mini is a fantastic device and can be great in the right situation. The important thing is making sure the majority of your needs from a tablet fall into those situations.