The new Apple Events apps for tvOS has finally arrived, giving Apple TV owners a way to watch the iPhone SE keynote from the comfort of their living room.

Apple’s ‘Loop you in’ event will be the company’s first keynote to stream on the new Apple TV, only unlike previous event channels, you’ll have to download it from the App Store to tune in. 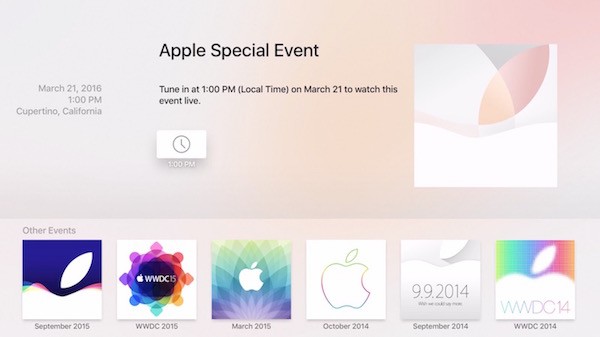 The interface of the new app is incredibly basic and just features a page displaying the time of the upcoming Apple Event in your local time zone, as well as the option to watch previous product announcements. Third and second generation Apple TV owners will have to wait until Apple’s channel appears automatically on Monday morning.

Apple’s March 21st keynote is set to begin at 10AM Pacific Time, where the company is expected to unveil a new 4-inch iPhone SE that packs that same processor as the iPhone 6s. A new 9.7-inch iPad Pro will be revealed with support for Apple Pencil and a Smart Keyboard, and some new Apple Watch hardware is expected to make an appearance too.

Be sure to come back on Monday for Cult of Mac’s liveblog of the iPhone SE event.

Number of comments on this postLeave a comment
Posted in: News Tagged: Apple events, Apple TV, iPad Pro, iPhone SE, Let us loop you in, tvOS