The so-called Bendgate incident might have done Apple no favors in 2014, but according to a new patent published today, Cupertino is far from done when it comes to flexible iPhones — this time, purposely so.

Apple’s newly-granted patent covers an invention related to flexible housing for future iOS devices. As described, these devices would be capable of being bent or even folded with no damage to the internal components.

To pull this off, Apple would likely ditch the milled aluminium used in current iPhones for more easily deformable materials such as soft plastics and fiber composites able to withstand repeated flexing.

Apple’s patent would allow it to continue making larger devices, since these could conceivably be folded for storage. Even more interestingly, it would be possible to use the flexibility of the devices as an additional interface element. For instance, users could trigger certain like opening an app by squeezing the device.

If you think this all sounds a bit far-fetched, the patent also alludes to Apple’s research into flexible batteries, which is an area far more likely to see immediate usage thanks to wearable devices like future Apple Watches. These batteries could either be made up of multiple rigid sections joined together in a flexible joint, or else batteries formed entirely from flexible battery layers. 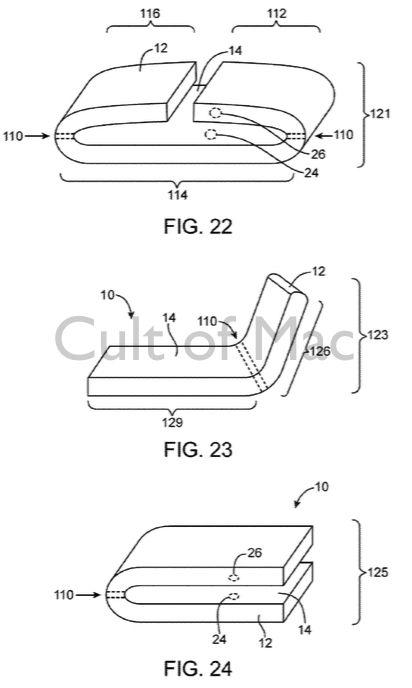 This isn’t the first time Apple has explored the topic of bendy or flexible displays in its R&D labs. A 2013 patent described a wraparound display for the iPhone, not too dissimilar to that of the fourth- and fifth-generation iPod nanos.

Another patent published this summer, meanwhile, described a flexible display layer overlaid on top of buttons, switchers, speakers, microphones and other components which feature in iOS devices.