HomePod’s arrival makes the smart speaker market even more confusing for the average consumer. Amazon and Google are dominating right now, but HomePod’s closest rival is actually the Sonos One.

It’s in a similar price range, it’s about the same size, and both speakers focus on sound quality above everything else. I’ve now spent over three weeks with both the HomePod and the Sonos One to help you figure out which one you should buy.

Check out our comparison video below.

The Sonos One normally retails for $199, whereas the HomePod is coming in at $349. To sweeten the deal, Sonos currently has a bundle where you can get two Sonos One speakers for the same price as one HomePod.

This makes it pretty clear that Sonos is worried about how much of the market Apple could steal, and as we’ve already seen, the HomePod sold more units on release day than any other smart speaker with the exception of the Echo Dot.

In terms of design, the Sonos One and the HomePod are almost the same size. They both come in black and white and they both have touch controls on top for when you don’t want to speak to them.

Personally, I prefer the look of the HomePod. It looks less like a standard speaker and is a better fit for living rooms. It can be placed against walls, in the centre of a room… anywhere you want thanks to 360-degree sound output.

The HomePod has 7 tweeters placed all the way around its base to output equal sound no matter where you place it. The Sonos One, on the other hand, has just one tweeter and one mid-woofer that are directed towards the front. So, for the best sound, the One really needs to be placed against a wall.

Plus, having just one tweeter means the One plays low to mid range sounds through the same channel. The HomePod can separate these more to make the music that you’re listening to sound richer and less flat.

The setup is a lot easier on the HomePod than it is on the Sonos One. Plug it in, bring out your iPhone, tap through three of four screens and it’s done. It uses your Apple ID to copy over any and all settings and its clever brains and microphones work out its position in the room to play the best sound.

The Sonos takes a bit more to set up. First, you need to download the companion app, go through a load of screens — which took me several attempts — and then you need to walk around the room, waving your phone about like incense in a church. This is so it can use the microphone within the phone to analyse the room whilst the speaker plays some tones. If you want to use Alexa, you’ll need to download a separate app for that and set that up, too.

Six months ago this would have seemed a clever way for the speaker to set up, but I’ve not felt this silly using tech since I first used the AirPods. So, for ease of setup, the HomePod wins hands down.

But what about ease of use? As you already would have heard a ton of times, the HomePod is pretty much limited to Apple Music. Which, for me, isn’t an issue; I’ve used Apple Music for years now and I really like it. If you’re not an Apple Music user, you can still use pretty much any service by streaming it from your phone over AirPlay. You just can’t use your voice for control, which eliminates the smart element.

With the Sonos, I actually think it’s more restricting — at least for me. To use the Sonos, you have to play audio through the Sonos app, but you can add plenty of different streaming services. I used Apple Music and, at first, it wouldn’t search outside of what was in my library, which was so frustrating. And I thought that was it. But when filming this video I reset the Sonos to film the setup and since then it’s been a lot easier to use and search Apple Music within the Sonos app.

When I speak to Alexa to play music, it usually plays whatever it can through Amazon Music by default. While I have an Amazon Prime account, I’m not signed up for the premium music service, so the selections are limited.

The thing that bugs me is not being able to play audio from other apps, like YouTube, to the Sonos the same way I could with any Bluetooth speaker. It just makes for a limited experience. Sure, you can connect up your Spotify account, or Tidal, or plenty of others. But it’s still not as smooth as it all could be. It feels like the most common complaint about HomePod — its restrictions — is also a major problem on the Sonos One.

The Sonos and HomePod both have microphones built in for voice control, but the one big difference here is the quality of these microphones. The HomePod can hear me with the volume on full, without me having to raise my voice, and it’s just amazing. The other day it heard me in another room when I was explaining quietly to my daughter what she needs to say to it for it to work. In constrast, the One sometimes hears “Alexa” when it wasn’t said, and then at full volume just won’t hear me at all, so I have to control it manually.

Both Alexa and Siri can be integrated with smart accessories such as light bulbs and thermostats, but Alexa boasts more compatible products as Siri is limited to whatever works with HomeKit.

In terms of how smart they are, at the moment, that has to go to Alexa. But the features Alexa has over Siri aren’t features I commonly use, so for the time being, I’m super happy with how smart Siri is. If you want to see some of the awesome things Siri can do, check out my 20 tips for HomePod video.

But what about the sound quality? That’s what most people want to know about.

The HomePod has had no shortage of compliments about just how good it sounds. And for the most part, I completely agree with them. The HomePod separates instruments and frequencies brilliantly, often bringing out new elements I’ve never noticed before. Sonos speakers do sound great and it tends to have louder vocals on most of the songs I tried, although I feel it tends to blend the sound together. But the HomePod has better bass even compared to two Sonos speakers in stereo mode, and it’s deeper.

In terms of volume, both are pretty on par. I did a quick test comparing the two using my recorder so you can hear them in action.

The difference to my ears, at least, is that the Sonos can start to distort at full volume and has blurring highs, which means I usually keep it to just below. When you’ve got two Sonos One’s paired together, it’s obviously louder than the HomePod. But I’m not going to compare the HomePod too much that way as it’s not fair to do so until we can pair two HomePods together properly when AirPlay 2 is released. Also, the Sonos will auto-level the songs which can be fairly obvious at times and the fact that it’s mono directional means it’s got to be in a certain place to get that full volume to you. The HomePod can be placed anywhere and fill pretty much any room.

Which one should you buy? 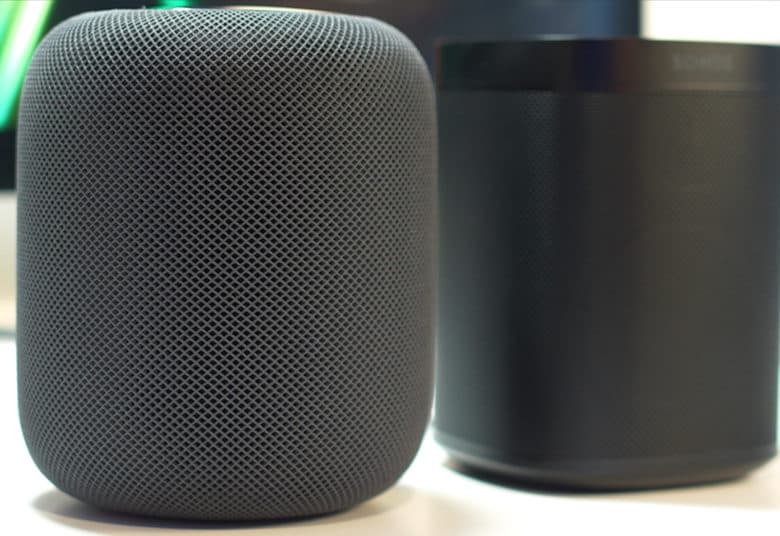 Overall, I’d easily choose HomePod over the Sonos. And that’s not just because I’m an Apple fanboy. The speaker sounds better, so much so that even Sonos’ CEO admits it. I find it easier to use, and love the fact that I can pick it up and place it down anywhere in my house without having to go through another lengthy setup process.

It’d be cheaper for me to prefer the Sonos as I love having that stereo sound, and they do sound great. If you’re not an Apple Music user and don’t plan to be, and you want to have multiple speakers, then the Sonos is the way to go — especially with the bundle offer that’s on at the moment.

Yes, the HomePod does cost more, but when you compare it to the fact that it costs Apple around $216 to manufacture, that $350 price tag doesn’t seem as steep. You won’t find another speaker with the same technology cheaper elsewhere. As soon as AirPlay 2 and my wallet allows I’ll be adding another HomePod to my house.

Let me know in the comments down below what your favorite smart speaker is. If you enjoyed this video, be sure to subscribe to the Cult of Mac YouTube channel for the latest and greatest tutorials, reviews and more.