As the nation grows more obese yet car culture still rules, here’s the nudge of the hour: your car and your fitness app talking to each other, reminding you that you’re not moving enough.

Automatic’s smart driving assistant can turn your old hunk of junk into a smart car, but the company announced today that it’s teamed up with Jawbone to whip your belly rolls into shape by giving drivers more insight into how your physical activity and driving patterns are connected.

Starting today,  if you have a Jawbone UP band you will be able to pair Automatic to the UP app for iOS or Android so that your drives appear alongside your physical activity. 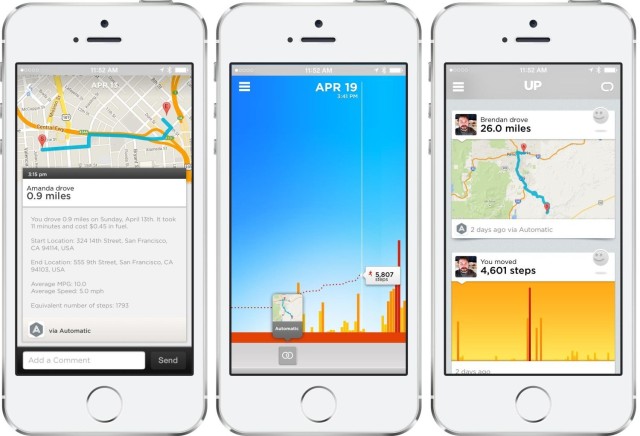 “We live in an environment that’s basically incentivizing you to drive everywhere,” says Brendan Nee, who hatched the idea for the hookup at the Clinton Foundation’s Code4Health Hackathon.

During the Palm Springs weekend — which featured a 5K and healthy snacks — Nee’s team developed a working prototype of the pairing and were awarded first place by a panel of judges that included Chelsea Clinton.

“The idea was that seeing how much you’re driving, especially short distances like a mile or two, might inspire you to substitute walking for driving. Especially if you know you’re not getting enough steps every day.”

With nearly 80% of all drives being under two miles, Automatic hopes the partnership will inspire users to drive less and walk more to boost your step count and lose some lbs. As new drives are automatically synced to the UP app, users can tap it to see how many steps they missed out on with each short drive.

The partnership might even cure your lethal doses of road rage thanks to Jawbone’s mood and diet tracking that can be compared to the amount of time spent in your car each day, as well as routes traveled, to see which driving habits make you happiest.

Jawbone UP users can grab the free update by adding Automatic from Jawbone’s App gallery, but if you don’t have an Automatic yet you can pick one up from your local Apple Store. You car and maybe even your future six-pack will thank you.