Get out the vote, Blue States (and Blue People) with these useful iOS apps for Democratic Party Supporters. If you’re looking for Cult of Mac’s Election Day App Guide for Republicans, click here. 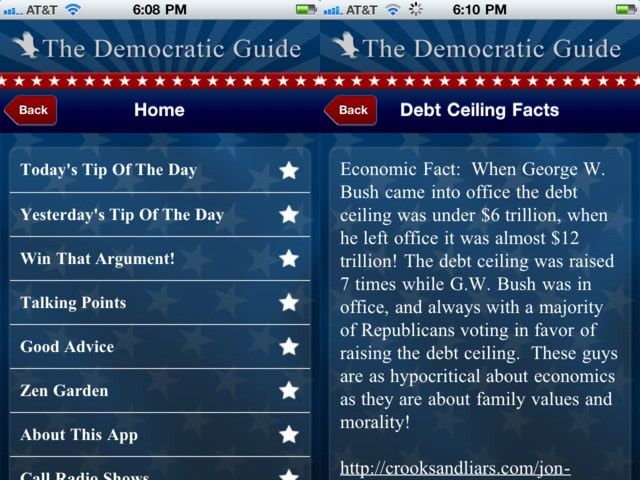 Sometimes, you need to be able to back up the talk with some walk, right? Here are a few apps that will help you do just that, with entries from the official Democratic Party, various left-leaning news organizations, and some liberal talk radio stations around the country.

The Democratic Guide – The developers of this free app hope to be a unique tool for supporters of liberal, progressive, and democratic policies and candidates. They want you use their app daily to get a quick infusion of facts and information to help you engage in informed debate, thereby strengthen our very democracy.

Democrat Talk Radio – Tired of all the right-wing talk radio getting all the press time? Wish you had a source for all the left-wing, liberal talk that you can handle? Well, here’s a $0.99 app that might be able to fill that need, with dozens of the best live liberal and progressive talk radio stations delivered to your iOS device all day, every day.

The Democratic Daily News app has news feeds from a ton of liberal blogs and online organizations, including AMERICAblog, Daily Kos, the Drudge Report, the Maddow Blog, Media Matters, Mother Jones, Salon, and more. In addition, it has phone numbers, addresses, and profile info for all 100 US Senators, so you can get in touch and be heard. 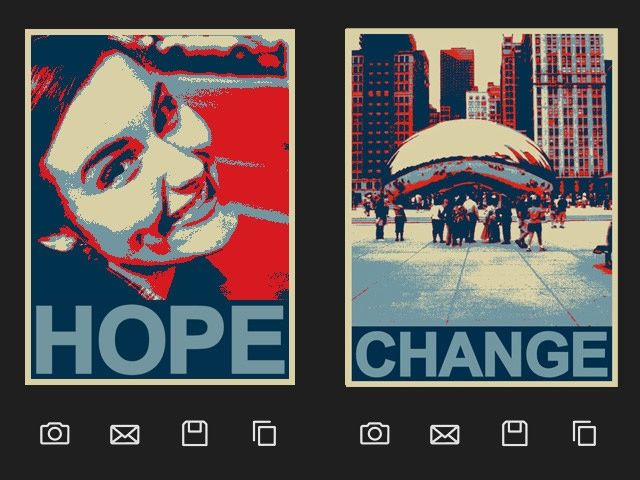 Sometimes, you just gotta take a side, and show others that you support the Democratic Party and its ideals for a better nation. While being informed and learning how to engage in respectful yet assertive conversations is important, showing where you stand can have just as much of an impact. Here are some apps that help you do just that.

Yes We Camera – A picture is worth a thousand words, right? What’s a picture with a title worth, then? Regardless, this camera app looks like a nice little break from all the political talk, and a way to easily show your support for the Obama-Biden ticket. Grab a picture and turn it into an iconic symbol of the Yes We Can campaign, then post it to your favorite social networks to let everyone know where you stand.

Proud Democrat – This $0.99 app features Democratic Party-themed news, forums, wallpapers, history lessons, images and more to show your support for the Obama-Biden ticket and your political party of choice. Add a Democratic image of Obama or famous Democrats from history for an extra touch of pride on your iPhone or iPad.

Get Out The Vote 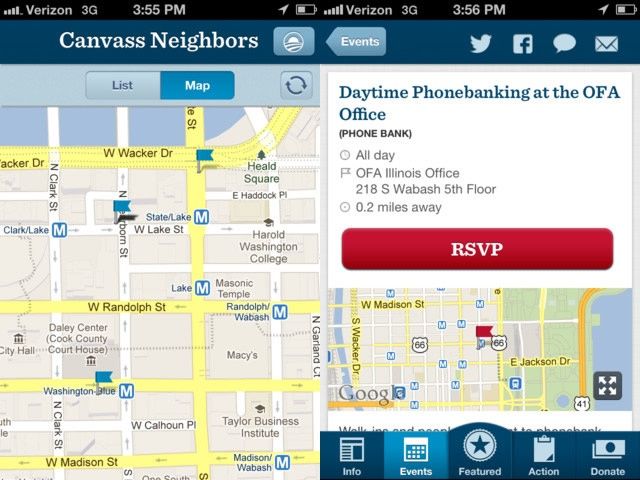 It only matters if you get out there and vote, so why not help other left-leaning friends and family do the same? Sometimes all it takes is a polite and gentle push in the direction of a voting booth to get that potential 40% of voters who might not vote this year to cast their ballot.

Obama For President – This free app, created by the Obama-Biden campaign, promises to pass along all the facts you need for on-the-fence voting friends or family. The much-publicized Canvass Your Neighbors feature is here, so you can get a list of local voters in your area. Find campaign events near you, share breaking news on Facebook and Twitter, and, best of all, access voting registration rules to help register those close to you to make sure supporters get to the polls on the big day. 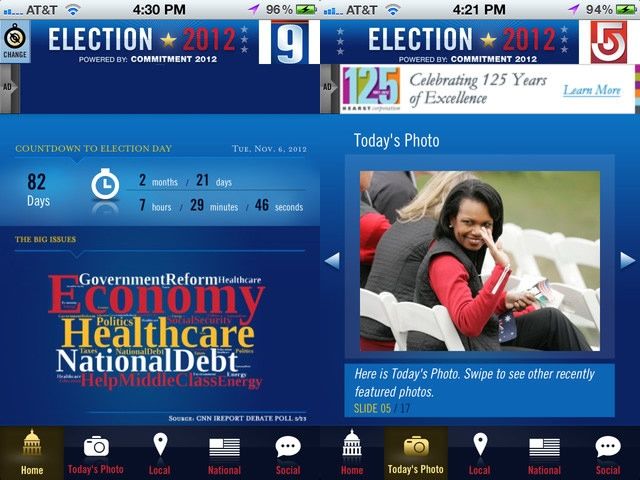 We’ll all be watching come election day, and how cool is it that we can use our iPhones and iPads to get real time election results? It’s super cool, that’s how cool it is. Here are a couple of apps that will help you track what’s going on as well as give you some great info to pay attention to in the meantime.

Election 2012 – This app has a ton of coverage, powered by leading journalists Hearst Television digital media stations around the country. On election night, you’ll get full vote results, live streaming video, and real time updates from the app’s new “Live Wire” feature. This seems like a great way to connect directly to the election itself so you can celebrate or commiserate with your like-minded friends and family as things go your way. Or don’t.

NYTimes Election 2012 – In addition to a ton of news coverage leading up to the big day, this free app from the New York Times will have the latest polling numbers, state-by-state projections, and live election results on November 8. Unfortunately, you’ll need to be a subscriber to see more than the top news stories, but it might be worth a month’s subscription fee to get all the election day goodness inside.