Here are Cult of Mac’s top picks for conservative readers who want to follow the 2012 elections with their iPhones and iPads… and influence them too. If you’re looking for Cult of Mac’s Election Day App Guide for Democrats, click here.

The official Romney-Ryan app is a good place to start. The “Issues” section covers Mitt Romney’s take on conundrums facing the country ranging from from Afghanistan to taxes, further broken down into sections called “Obama’s failure” and “Romney’s plan.”

In addition to the news section, you can follow the the Republican candidates via their official Twitter account and comment on their Facebook page. If you’re looking to get more involved, the “Action” section can hook you up with local events. An updated version of the free app was released Oct.27; it was sluggish in our test but stable.

There are a number of bunch of apps to help you find where to cast your vote, we suggest free Voterhub, which will tell you where your local polling station is plus what’s on the ballot. (Full disclosure: it’s a joint effort from state and local elections officials, the Pew Center on the States, Google, AT&T and Microsoft.)

Startup Votizen goes one step further with an interesting take on the voter ID issue: in addition to helping you find a polling place, the microapp lets you show off your party affiliation and voting record. You can download from it from the web, it’ll appear in the Passbook section of iOS6. The inevitable social component lets you see which of your Twitter, Facebook, Google+ and Linkedin contacts are registered voters. 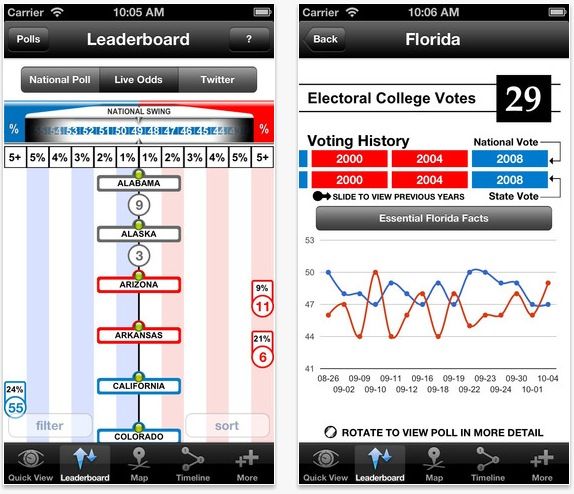 A lot of election apps are tied to media outlets, if you’re looking for one untethered to an agenda check out Presidential Election Race 2012. The $0.99 app will keep you abreast of polls, what’s happening in swing states and features a cool-looking leaderboard to keep score as the results come in. You can also customize alerts and updates for the specific results you’re following to get the max out of your second (or third?) screen. 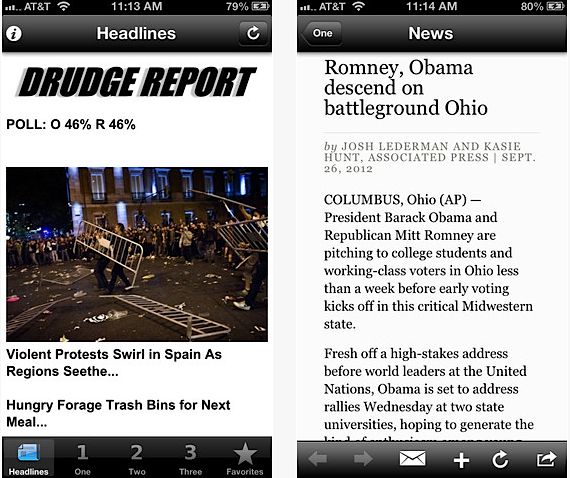 Proud Republican (on sale  at $2.99) provides all the chatter from conservative talking heads including Rush Limbaugh, Sean Hannity, Mark Levin, Michael Savage and Glenn Beck and aggregates dozens of conservative news sources and forums including FoxNews, The Foundry and Newbusters.

While not a conservative source per se, The Drudge Report can’t be accused of liberal media bias. (The site’s right-leaning cred dates back to when founder Matt Drudge famously broke the Monica Lewinsky story after Newsweek demurred.) Check out the free Drudge Report Mini for your iPhone for all the breaking headlines on election day. 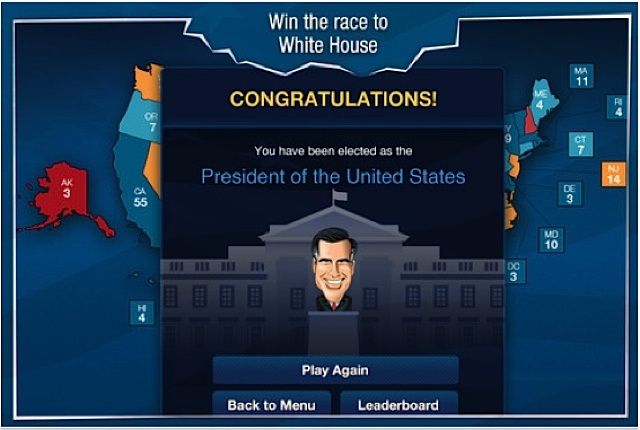 Battleground Election 2012. (Free.) Good games about the elections are a little thin on the ground – most of the boxing–style games are fun for about the first TKO. Battleground is a single- or multi-player game where you pick a candidate then get moving towards the White House.

Your man Romney plots his weekly campaign trail – choosing between red, blue and swing states – then faces his opponent Obama. A pop-up of the state tells you what local issues are and how much it costs to travel there. You can choose between campaigning or fundraising, then see what your opponent does. It’s not the fastest-paced game around, but if you’ve ever killed a few hours seeking world domination with Risk, you’ll like it.