Apple released iOS 6 to the masses on September 19th, and it was reported that 15% of all iOS devices had been updated to the new operating system within the first 24 hours of availability. Chitika Insights has been tracking iOS web traffic since the release of iOS 6 last month, and new numbers today confirm a particularly aggressive adoption rate.

According to Chitika, iOS 6 now accounts for more than 60% of all iOS device traffic on the web.

To quantify this study, Chitika Insights took a sample of hundreds of millions of mobile ad impressions coming out of the Chitika Ad network ranging from September 19th to October 19th, 2012. The growth rate of iOS 6 was then compared to total iOS Web usage using a time series to illustrate the rate of adoption of the new OS. A graph depicting this data can be seen below: 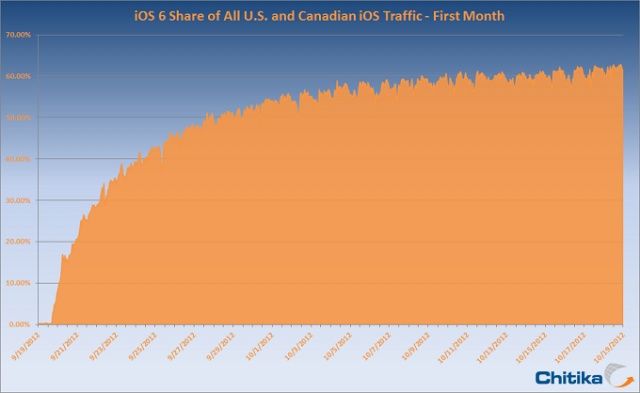 While growth has obviously plateaued, Chitika notes that iOS 6 is still gaining market share. The upcoming release of the iPad mini is expected to push iOS 6’s adoption rate even higher in the weeks to come.

Apple is reportedly getting ready to deploy iOS 6.0.1 with bug fixes, and 6.1 is being tested internally. If you haven’t updated to iOS 6 for some reason, make sure to read Cult of Mac’s extensive review.

Number of comments on this postLeave a comment
Posted in: News Tagged: iOS 6, web