Nike released another major update to their Nike+ GPS iPhone app last week. The app uses technology from MotionX, rather than the shoe sensor that Nike jointly developed with Apple. At CES, Nike launched the Nike+ SportWatch GPS in partnership with TomTom. Apple is notably absent from these recent announcements, and it seems the elegant simplicity of Nike+ is suffering as a result.

Like the Brangelina of the business world, Nike + Apple was a marriage made in heaven back in 2006. Two of America’s most iconic and admired brands coming together to do great things.

Their whirlwind romance kicked off with the launch of the Nike+iPod Sport Kit. Nike+ worked seamlessly, providing a great way for runners to track their progress, and keep motivated. Both companies focussed on their core strengths. Apple brought the hardware and the music. Nike provided the running shoes and website. While other solutions offered more features, what made Nike+ so special was its simplicity. It just worked, so when you started running, you could forget you were even using it.

Nike+ was a runaway success. So much so that after just one year, Steve Jobs proudly announced the millions of miles the Nike+ community had already clocked up. Taking their relationship to the next level, Apple integrated Nike+ support into iPhone 3, while Nike added Nike+ support to all their running shoes.

The first signs of trouble came a year later, when Nike launched the Nike+ SportBand, which communicated directly with Apple’s sensor, eliminating the need for an iPod. Apple responded in 2008 with the introduction of a pedometer in the iPod nano that eliminated the need for Nike running shoes.

But Nike’s infidelity has reached new heights recently, as they have partnered with MotionX to produce the Nike+ GPS app; with Polar to produce the Wearlink+ heart rate monitor and with TomTom to produce their new Nike+ SportWatch GPS. The result of all these new partnerships is that the original simplicity of Nike+ has been lost, in favor of an immensely complex product matrix, and no single solution offering a comprehensive set of features. (See table). 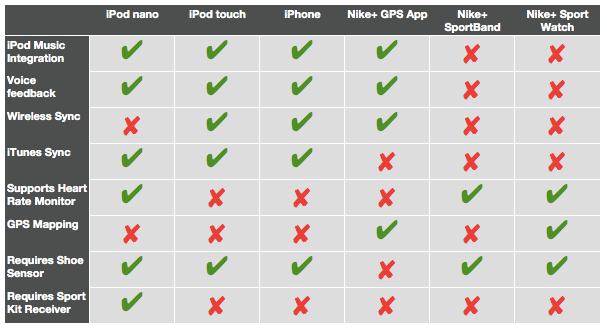 But simplicity is not all that Nike+ has lost. Accuracy also seems to have suffered. I’ve road tested every possible combination of Nike+ equipment over the years (running over 3,800 miles in the process). The Sport Kit has been pretty reliable for the most part. By comparison, data from the SportBand is clearly not as finely grained. And with the Nike+ GPS app, it is even less reliable, as you’ll see from the screengrab above from an interval training session I did in December, in which the Nike+ GPS app reported that I exceeded the speed of light twice, as my progress line loops back in time. Beat that, Usain Bolt!

The problem for the Nike+ GPS app appears to be that it forgoes the shoe sensor, attempting to gauge your pace using a combination of data from GPS, accelerometer and gyroscope. It’s a neat idea, but the results just don’t seem to be as reliable. The new SportWatch will use the shoe sensor, in addition to TomTom GPS data, so hopefully this will be more accurate.

It seems that Nike and Apple have just grown apart. In a recent advertising campaign, Nike promoted their SportBand using the line “The freedom of running without music” – a phrase that doesn’t suggest much love left for their pals in Cupertino. And in a subtle slight to Mac users, they still haven’t updated their Nike+ screen saver to work with Snow Leopard. Mac users are still waiting impatiently for this. 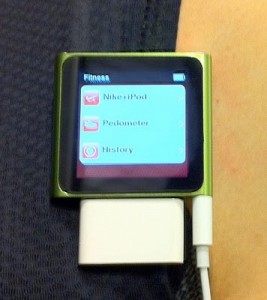 And the feeling appears to be mutual. Apple has done nothing to update the Sport Kit since it launched in 2006. It looks absurdly large when connected to the latest iPod nano (see pic). And the new nano itself has less Nike+ features than previous models. (No calendar view or run graphs).

So it seems that, like so many other super-couples, Nike and Apple may be heading for a split. This presents interesting new opportunities for both companies. Nike could release their GPS app for Android. While for Apple, fitness presents a great new app to add to their iLife suite, and the MobileMe online services. With Apple’s legendary expertise in vertical integration and owning the entire customer experience, they’re every runner’s last best hope for recapturing the simplicity or the original Nike+iPod Sport Kit.