The iPhone XR is typical Apple. It’s an entry-level phone with a bunch of premium features. Jony Ive just cannot cut corners, even if he wanted to. This is no plasticky, cut-rate phone built to meet a price point. It’s a primo phone with primo features (and a primo price tag, TBH). It just happens to be the cheapest new iPhone in Apple’s lineup.

The iPhone XR is arguably Apple’s most interesting smartphone of 2018 because of this slightly odd bundle of budget/premium features. It’s arguably a $1,200 phone in a $750 package.

For a chance to win a brand-new iPhone XR, enter our free giveaway here.

The first thing you notice is, of course, the big beautiful screen. It’s hard to miss! It’s all screen!

The XR takes the edge-to-edge display introduced with the iPhone X last year (albeit a cheaper version), and its glass back, and combines it with a 7000 series aerospace-grade aluminum frame. The XR looks and feels more like an iPhone 8 than Apple’s more recent stainless steel handsets. It feels good. The aluminum is warmer and softer than steel, and blends well with the glass.

The iPhone XR is a little thicker and heavier than the iPhone XS, measuring 8.3mm and weighing 194 grams (versus 7.7mm and 177 grams). But it’s certainly not unwieldy. It weighs about the same as an adult Syrian hamster and is comfortable to hold for long periods. You’ll have no problem slipping it in and out of your pocket or purse.

There’s a good reason for the added weight and thickness, too — the iPhone XR carries a larger display and a much bigger battery.

The iPhone XR has noticeably bigger bezels around its Liquid Retina display. That’s because of the LCD panel Apple used to keep costs low (more on this later). They’re still slim enough and you’ll soon forget about them, but if you’re switching from an iPhone X, you may notice the difference initially — especially if you place both handsets side-by-side.

The glass panels on the front and back of the iPhone XR are still curved at the edges so that they seamlessly meet its metal frame. The remaining physical buttons for controlling volume and putting the display to sleep are exactly where you would expect to find them on an iPhone, and there’s a Lightning port but, of course, no headphone jack.

The iPhone XR is rated IP67 for dust- and water-resistance, which is the same rating offered by the iPhone X and iPhone 8 series. It should withstand splashes and up to 1 meter of water for a maximum of 30 minutes, but it’s not quite as resistant as the IP68-rated iPhone XS and XS Max.

Durability and size won’t matter much to those buying an iPhone XR for the color, however. It’s the only smartphone in Apple’s current lineup that comes in a range of bright and beautiful finishes, including blue, yellow, coral and red. Rivals will almost certainly follow suit in 2019, but for now, it’s one of the few handsets you can buy in so many color options.

(Here’s a handy guide to all the differences between the iPhone XS line and the iPhone XR.)

The iPhone XR looks to be carrying the same display as the iPhone XS or XS Max, but there are a couple of big differences. At 6.1-inches diagonal, it’s larger than the XS’ screen but a bit smaller than the XS Max’s (which measures 6.5 inches). It also uses more traditional LCD technology rather than an OLED panel.

Apple calls it the Liquid Retina display, and claims it’s the best LCD display in the smartphone industry. It’s certainly impressive, with True Tone technology, an excellent backlight, and support for the P3 wide color gamut.

If you’ve been using an iPhone 8 or 8 Plus, you can expect it to be just as good — but it’s not perfect.

Apple has spoiled us with OLED screens, and anyone who’s used an iPhone X or XS will notice the XR’s display is not quite as pretty. There is no support for High Dynamic Range, and its 1,400:1 contrast ratio isn’t even close to the 1,000,000:1 offered by Apple’s pricier phones. You’ll miss out on 3D Touch, too, though that’s no disappointment for most.

Yes, it’s not as bright as the XS or XS Max, but you’ll only notice this if you compare screens side-by-side. Pick it up cold, and it looks fantastic. It’s also not as bright when viewed at an angle. But, again, you’re unlikely to quibble about that in day-to-day use. In everyday use, it’s hard to fault the XR’s screen.

This certainly isn’t a cheap LCD display, either. Apple has put a great deal of effort into engineering it for the XR’s rounded edges. Unlike OLED displays, in which each pixel can be lit individually, LCD displays rely on a single, separate backlight that’s installed around the edges of the screen (hence the larger bezels), so Apple had to build miniature apertures into the pixels in the corner to mask some of the lighting that shines through.

Other smartphone manufacturers wouldn’t have done this; it’s yet another example of Apple’s exemplary attention to detail. And it proves that while the XR might be Apple’s most affordable handset this year, it wasn’t an afterthought like the iPhone 5c. Some things might have been left out to keep costs low, but no corners have been cut.

That’s true when it comes to many of the XR’s internal components, too. Apple didn’t just throw older components into a new shell; you get the same A12 Bionic chip here as you do in the XS. Sure, there’s a little less RAM (3GB versus 4GB), but that’s all you need with the lower display resolution. The XR is blazing fast no matter what you do with it.

Multitasking, gaming, and even augmented reality are just as smooth on the XR as they are on the XS. You should notice a welcome boost in browser performance, too, with the A12 tackling JavaScript rendering with ease. No Android phone comes close to matching the performance of the XR, which performs just as well as the XS series in benchmark tests.

The XR can’t keep up with the XS in network performance, however. Its more expensive siblings now support ultra-speedy Gigabit LTE, whereas the XR uses the same LTE Advanced technology we’ve gotten from previous Apple devices. This shouldn’t be much of an issue to the vast majority of iPhone consumers, but it’s worth noting.

The XR does offer dual-SIM technology like the XS, but it won’t be available in the U.S. until the release of iOS 12.1, so we didn’t get a chance to test it.

Unlike the iPhone XS and XS Max, the XR doesn’t have a second telephoto lens, which means no optical zoom. However, it does carry the same 12-megapixel camera with f/1.8 aperture found inside the XS, and Smart HDR technology. That means the photos and videos you shoot with this will be just as spectacular.

The XR offers Portrait mode with advanced bokeh and depth control, too, despite just one lens — but it only works on people. Try to take a Portrait photo of your pet or an inanimate object and the XR will tell you “no person detected.”

However, while taking pictures of the pooch above, we discovered that it will occasionally work with dogs, too. If you just move the camera a little after it says “no person detected,” the XR will more often than not just suddenly snap into Portrait mode. This allowed us to take several Portrait mode pictures of the dog. We didn’t have any luck using it on different kinds of objects. (Note: You can get many more Portrait effects and depth controls on the XR using third-party apps.)

There are several comparison photos showing the similarities between the XR and an XS Max at the bottom of the post below.

The same 7-megapixel front-facing camera from the XS is also packed into the XR. It boasts an f/2.2 aperture, Smart HDR, Portrait mode, and Portrait Lighting with five effects. You can also use it to shoot 1080p video at up to 60 frames-per-second. And, yes, Animoji is supported.

The same front-facing camera also means you get Face ID in the XR, and it works wonderfully. It’s more secure that Touch ID and a darn sight easier to use, and we’ve found it to be much more reliable. It is ever so slightly slower than fingerprint scanning, but you probably won’t notice it.

iPhone XR battery life will blow you away

If there’s one thing the XR does better than any other iPhone — and any other smartphone, period — it’s battery life. Apple says the XR lasts up to 1.5 hours longer than an iPhone 8 Plus between charges, and the device lives up to that promise. You should have no trouble getting through a full day with juice to spare, even if you play games, watch videos or stream music.

The XR has the same improved wireless charging technology as the XS, which means it’s faster than previous models. Plus, it’s compatible with the Qi charging accessories you may have already purchased if you’re upgrading from the iPhone X. You’ll still get power through a cable faster, however, with a 50 percent charge in just 30 minutes.

The iPhone XS is the best smartphone Apple has ever made for under $750. It’s beautifully designed with a great display, and it’s incredibly fast. Camera performance is excellent and battery life is even better.

It might not be the most impressive smartphone Apple sells today, but it’s impossible to be disappointed with the XR. It’s the “future of the smartphone” Apple has been pushing, with just a few alterations to make it more affordable.

If you can’t afford an iPhone XS, get an XR instead.

You’ll be delighted with it.

For a chance to win a brand-new iPhone XR, enter our free giveaway here.

I took some comparison photos to compare the iPhone XR with the iPhone XS Max. I was surprised that the photos are pretty much identical but I shouldn’t;t have been: It’s the same hardware after all, minus the second zoom camera on the XR.

The only difference is in the portrait photos below. Note how the frame is tighter on the XS Max portrait. That’s because the XS Max zooms in tighter to capture the shot, whereas the XR relies on its wide-angle lens. Both shots were taken from the same spot.

None of the photos have been altered or processed, except for converting from HEIC to JPEG to display them on the site. 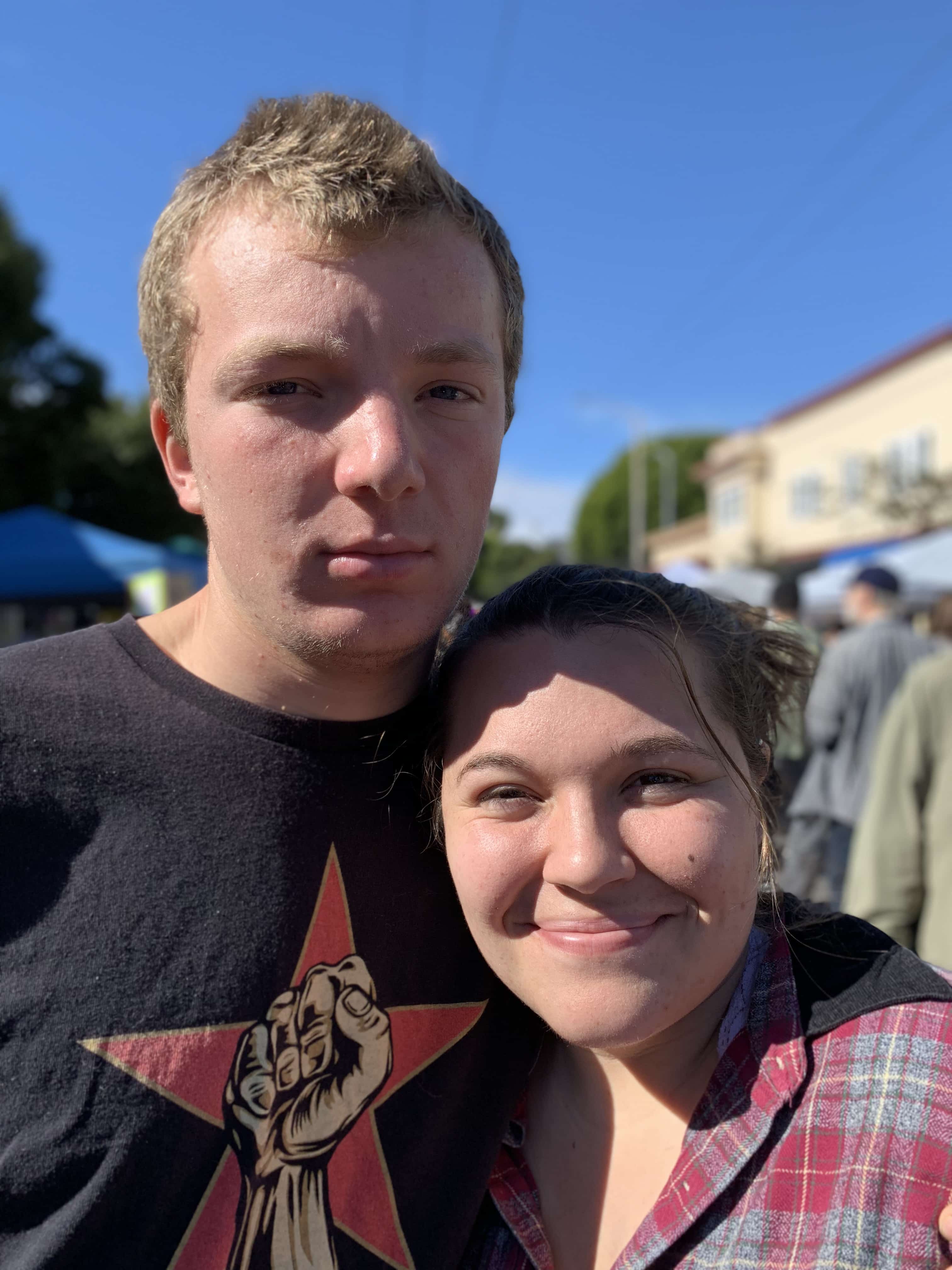 See the Cult of Mac reviews policy, and check out more stuff we recommend.