Apple just set an all-new record for the most App Store revenue brought in from one country in a quarter. Only instead of the United States taking the top spot, China is now Apple’s most profitable market for apps.

China accounted for $1.7 billion in total iOS revenue during Q3 2016, according to a new report from app analytics firm App Annie. Last quarter, China shot past the United States for the most revenue in games. Now China is starting to dominate all categories. 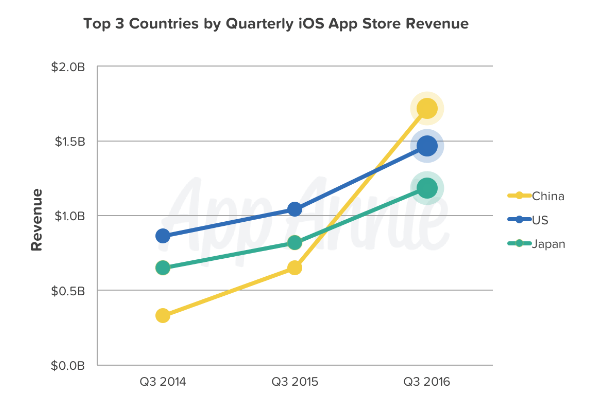 [contextly_auto_sidebar] The U.S. market now brings in 15 percent less revenue than China, and growth in the Asian country is expected to continue climbing drastically through 2020.

Games now make up 75 percent of App Store revenue. Entertainment and social networking apps are starting to make huge leaps, though: Revenue in those two categories more than tripled over last year’s numbers. Video-streaming apps are also taking off in China.