The dimensions of the iPhone 7 Pro will be exactly the same as the iPhone 6 Plus, according to an alleged leaked schematic from Asia, but the new device will feature a couple of major physical changes.

Apple is supposedly planning to include a dual-lens camera on the iPhone 7 Pro and, if these drawings are genuine, we might now know what the high0tech camera sensor on the back will look like once it’s released later this fall. 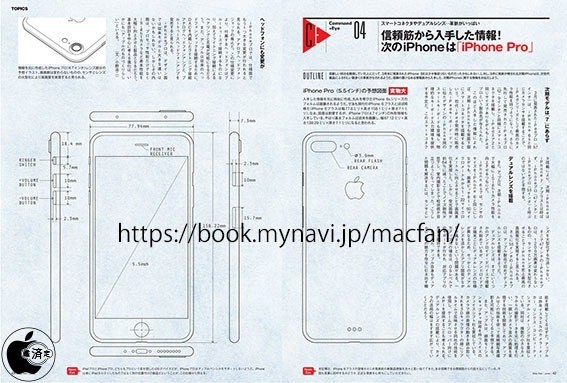 Apple’s new dual-lens camera feature may only be available on the 5.5-inch iPhone 7 Plus/Pro due to supply constraints. The extra lens should provide better low-light performance, and allow Apple to pull off some other crazy camera tricks.

The pill-shaped dual-lens camera isn’t the only significant change on the iPhone 7 Pro schematic, which was discovered by Japanese site Makotakara. A Smart Connector port can also be spotted on the rear shell and the headphone jack on the bottom has been removed. Some have speculated that Apple will use the space for an extra speaker, but the drawing shows the device will only have one.

Apple is expected to announce the iPhone 7 and iPhone 7 Pro around September. Additional new features will likely include an A10 processor, modems from Intel and maybe even a new home button design.

Will these changes, most of which have been widely rumored, be enough to save Apple from the ravages of “peak iPhone” and end the near-constant chatter about the company’s lack of real innovation after Steve Jobs’ death?

Probably not. We might have to wait until 2017 — and the rumored release of the iPhone 8 — for that.