After two long years sitting on the bench, Apple finally updated the humble Mac mini with faster processors, faster Wi-Fi and much better graphics. It also gets a modest price drop, now starting at a reasonable $499 — although you could probably buy two low-end Windows PCs for the same price.

However, the mini is a Macintosh, running OS X Yosemite, and not stinky Windows. It makes for a great media center PC or a starter machine. In fact, everyone here at the Cult of Mac offices is talking about buying one to put under their TV.

“People love Mac mini,” said Phil Schiller, Apple’s head of marketing said in a statement. “It’s a great first Mac or addition to your home network, and the new Mac mini is a nice upgrade packed into an incredibly compact design.” 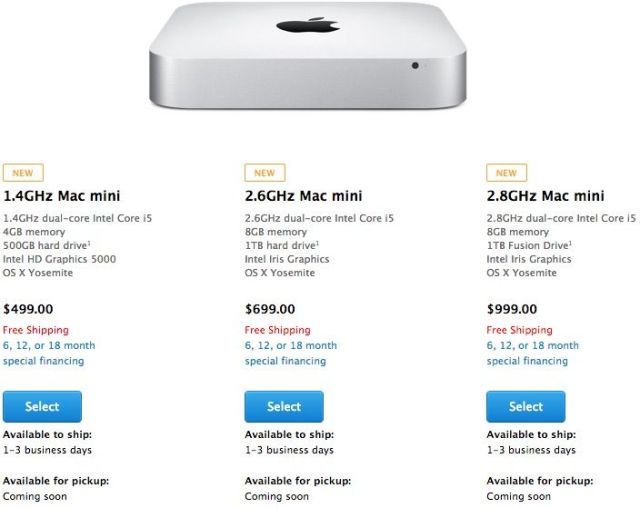 The mini was last updated in October 2012 — an eternity in Apple’s busy product update schedule.

The 2014 models (which come in three basic configurations) have been updated with Intel’s higher-performance 4th-generation (“Haswell”) i5 processors and integrated Iris graphics. While the new processors bring a modest performance improvement over the previous generation chips (see MacBook Air benchmarks for example), the Iris graphics are a solid improvement. The Iris graphics deliver up to 90 percent faster graphics compared to the previous generation. Note, however, that the entry-level $499 mini offers only Intel HD Graphics 5000, which is a much more modest improvement.

The Fusion Drive upgrade comes at a price, however. It is offered as as standard only on the high-end model, which starts at $999, and as a $250 option on other configurations. The basic $499 mini comes standard with a 500GB hard drive; and the $699 model with a 1TB hard drive. All the minis can also be configured with up to 1TB of solid-state flash storage.

The new mini also gets much faster Wi-Fi. It’s equipped with the latest 802.11ac “Gigabit” Wi-Fi, which is three times faster than 802.11n, and can reach speeds of up to 1 Gigabit per second.

The current Mac mini gets a connectivity upgrade. The 2014 models get an extra Thunderbolt 2 port, bringing the total to two. The pair of ports can deliver an astonishing dual 20-Gbps of data transfer, and can daisy-chain up to six Thunderbolt devices on each port, such as hard drives or extra screens. Talking of screens, the new mini can output to two screens, including any size of HDTV via the built-in HDMI port.

The mini has always been loved by hackers and tinkerers like iFixit — who say it’s the most-repairable Mac — and owners too, thanks to its unusually high high resale value.  It measures 7.7-inch-square — and is still BYO display, keyboard, and mouse.

So which one to buy?

The biggest decision to make when buying a new Mac mini is graphics performance. If the mini is going to be a media center PC, graphics performance is key, and you should go for the mid-level ($699) or higher option because of the Intel Iris Graphics, which is significantly improved. If you’re looking for an entry-level Mac for the kids to do homework on, go for the $499 model (which offers Intel HD Graphics 5000).

Don’t bother to upgrade RAM, hard drive or processor. At least, not at Apple’s prices (see the rationale in this previous post about buying a Mac mini). The CPU upgrade will be negligible,  and RAM or HD can be upgraded on your own at much better prices from third-party suppliers.

Disagree? Set us straight in the comments.

It seems to be sayonara for the Mac mini server, the diminutive file-sharing machine that runs the server version of OS X. It’s disappeared from the online Apple Store. There are now only three configurations of the mini available. There was no formal announcement, but like the iPod Classic, it seems to have been quietly disappeared from the lineup.