Apple has regained its crown as J.D. Power’s top tablet maker in the world, according to the company’s latest U.S. Tablet Satisfaction survey.

Samsung knocked the iPad off the top post last year, but after surveying 2,513 tablet owners Apple came out on top in 2014 with a score of 830, dominating in every category except cheapness. 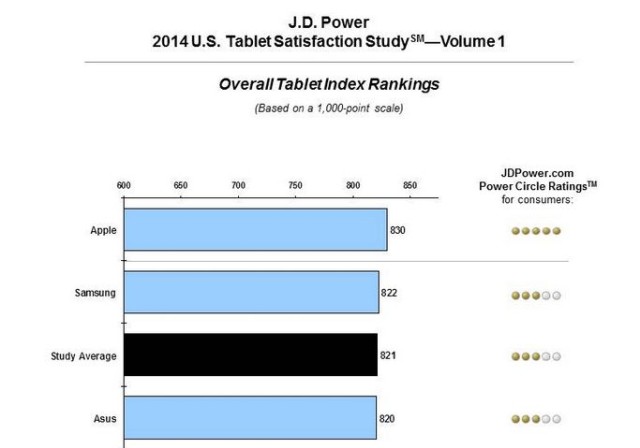 Samsung tablets scored above average with a score of 822 out of 1000, but overall tablet satisfaction is on the decline thanks to the army of cheap tablets released by brands like Amazon and Acer who received the two lowest scores.

“Overall satisfaction has declined, especially with ease of operation, as navigation features and functions have changed,”says Kirk Parsons, senior director of telecommunications services at J.D. Power

J.D. Power’s survey also revealed that lower price has become the No. 1 reason for tablet choice in 2014, with 25 percent of those surveyed citing price as the determining which brand to buy. Manufacturers have apparently heard the message as the average tablet price has now dropped to $337 in 2014 after sitting at $390 in 2012.