It took nearly 6 months, but former Burberry CEO Angela Ahrendts has officially joined Apple as its new Senior Vice President of Retail and Online Stores. Her bio has been added to Apple’s executive leadership website, making her transition from Burberry complete.

During Apple’s earnings call last Wednesday, Tim Cook said that Ahrendts would come on board the following week. Apple originally announced that she was joining the company to lead its retail division back in October of last year.

Ahrendts will be the first person to lead Apple Retail since John Browett left the company in the fall of 2012. She will report directly to Tim Cook.

While at Burberry, Ahrendts turned the British retailer around into what is now one of the biggest luxury brands in the world. She has also spoken very highly of Apple for years, and her experience in the fashion industry is particularly interesting when you consider Apple’s rumored push into wearables.

Here’s her full bio, per Apple:

Angela is responsible for the operation and expansion of Apple retail and online stores, which have redefined the shopping experience for hundreds of millions of customers around the world. Apple retail stores set the standard for customer service with innovative features like the Genius Bar, personal setup and one-to-one personal training to help customers get the most out of their Apple products.

Angela joined Apple from Burberry, where she served as CEO and led the company through a period of outstanding global growth. Prior to Burberry, she was executive vice president at Liz Claiborne Inc., and earlier in her career she served as president of Donna Karan International.

Angela holds a Marketing and Merchandising degree from Ball State University in Indiana, where she was awarded an honorary doctorate in 2010. She is also a member of the UK’s Prime Minister’s Business Advisory Council and was named honorary dame commander of the British Empire in April 2014.

Nice to see a woman on this page for a change: 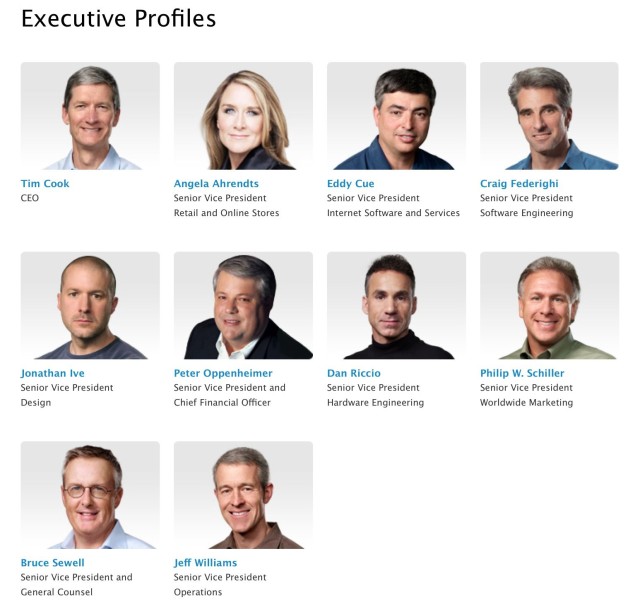