Siri didn’t become a feature of iOS until the launch of the iPhone 4s in October 2011.

A patent published Tuesday, however, shows how the idea of the “intelligent automated assistant” that would become Siri was being worked on as far back as 2006 — before the first iPhone was even unveiled.

The patent names artificial intelligence experts Adam Cheyer and Didier Guzzoni as its inventors, neither of whom worked at Apple at the time of filing.

The patent describes a method for building an automated assistant, in which a decision-tree style architecture can receive multiple facts at different stages during a conversation, and use this to provide more useful responses.

It also suggests a future use of Siri, which would take advantage of sensors around a person’s home or office to be able to provide contextual answers based on the physical environment a person was in at any one time.

A diagram of how this might work is reproduced below: 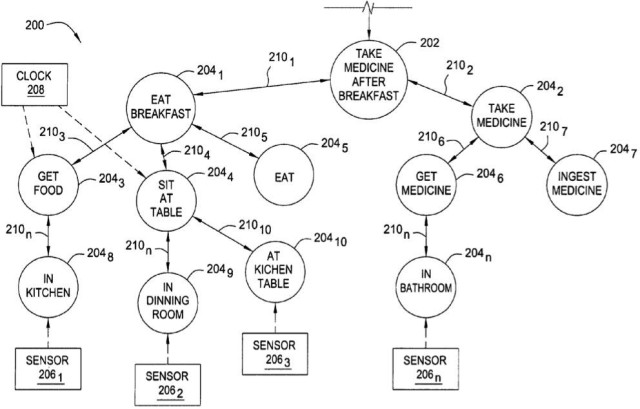 While Siri is most associated with Apple today, it did not start life as an Apple project, but rather as a five-year DARPA-backed project to build an intelligent virtual assistant.

The goal of building an intelligent automated assistant goes back years. The newly published patent details the numerous steps it took to develop the technology that exists on our iOS devices today.

The oldest patent mentioned is a 1972 one for converting printed text into synthetic speech. From there, the path to Siri moves through the 1980s with patents for real-time text-to-speech conversion, devices controlled by voice, and others.

Apple itself considered the possibilities of an intelligent virtual assistant in 1987, when then-CEO John Sculley created a video predicting how Siri might be used one day in an iPad-like device:

Before Steve Jobs inked the deal to bring Siri to the iPhone in 2010, it debuted as an independently developed iPhone app. Thanks to an agreement with Verizon it very nearly wound up being a default app on Android phones.

The “Method and apparatus for building an intelligent automated assistant” patent was filed on September 8, 2006.