Today LaCie announced its new lineup of hard drives, including the Fuel, a wireless 1TB hard drive that works with the Seagate Media iOS app. This is the first collaboration between the two storage companies since Seagate bought LaCie last year.

Besides the Fuel, LaCie is also unveiling three new hard drives at CES, including the Little Big Disk portable drive with Thunderbolt 2.

The Fuel is the most consumer-oriented drive of the bunch. It offers 1TB of additional storage to an iPhone, iPad or Mac on the go. The Fuel creates its own wireless network that devices can connect to, and Seagate’s app gets around iOS’s lack of a filesystem to let users browse and play all of their stored media. AirPlay compatibility is included, so content can be instantly streamed from the Fuel to an Apple TV.  There’s also Dropbox support to keep files synced on the Fuel with another device.

With 10 hours of battery life, the Fuel looks like an attractive option for those looking to expand their storage on the road. LaCie will start selling the Fuel for $199 through its online store and retail partners around the world soon.

Another notable drive from LaCie is the new Little Big Disk with Thunderbolt 2. The black, aluminium-enclosed drive can deliver crazy speeds of up to 1375MB/s. Two 500GB PCIe Gen 2 SSDs in RAID combined with Thunderbolt 2 allow for 4K video editing. 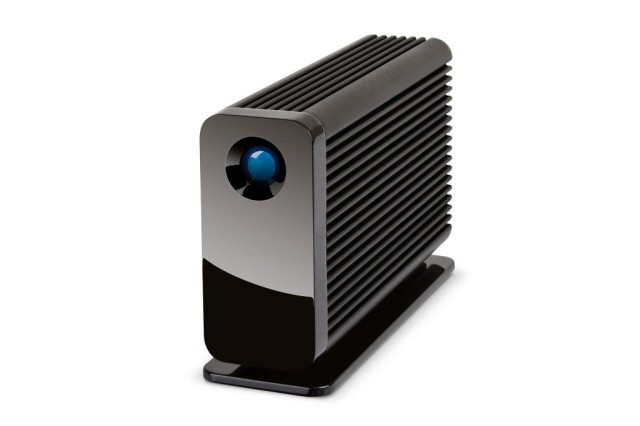 Pricing hasn’t been announced yet, but LaCie expects to ship its new Little Big Disk in the first quarter of this year.

Things take a turn for the eccentric with the Culbuto and Sphère, LacCie’s two other drives. The Culbuto is a USB 3.0 thumb drive that “whimsically bobs side to side as it is poked – much like a roly-poly toy” (that’s taken straight out of the press release). 16GB and 32GB capacities are available with prices starting at $49.99.

The Sphère is a $490 “handcrafted hard drive” in “a spherical case of silver-plated steel.” It’s designed by French luxury brand Christofle and has a “sensual and strong silhouette.” And in case you care about the capacity of a spherical $490 hard drive, it holds 1TB.

You can find these new products on LaCie’s website.