Apple is expected to unveil iOS 6, the next major iteration of its software platform for the iPhone, iPad and iPod touch, at WWDC in two weeks. Not much is known about iOS 6, other than the new Maps app and the possibility of a more metallic look. Many have been speculating about what Apple could introduce, and we at Cult of Mac have a few ideas we’d like to see come to fruition.

The iOS jailbreak community has been innovating at a quicker pace than Apple for years. Jailbreakers had multitasking first, tethering first, iTunes WiFi sync first, and so on. There are many jailbreak concepts currently available for iOS 5 that we’d love to see Apple implement in iOS 6. That’s not to say that Apple will adopt all of these concepts, but we expect at least a few to show up in a way that only Apple can make happen. 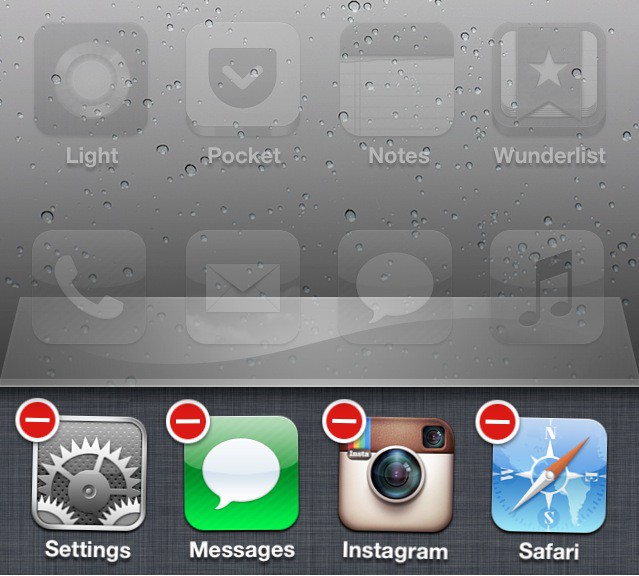 iOS 6 is due for a refresh of how we multitask on a mobile phone. The original iPhone didn’t have multitasking, and it wasn’t until iOS 4 in 2010 that the app switcher was finally introduced. You can double tap the Home button to invoke a small tray that contains recently opened apps. Tapping and holding an icon will allow you to remove or rearrange apps in a watered-down multitasking environment. There’s no way to view a quick preview of an app before you select it, and 80% of the iPhone’s screen isn’t even in use. There are better ways to tackle multitasking.

Jailbreak developers have been rethinking iOS multitasking for years (they were the first ones to originally make it possible), and there are some great examples available now in Cydia, the jailbreak alternative to the App Store.

Multifl0w turns iOS multitasking into a card-like experience. Borrowing from Palm’s webOS, you can view open apps as standalone windows and flick through them or choose from a full thumbnail presentation. It may not be what Apple decides to go with, but it’s something different.

There’s also Switchy, a creative take on the current app switcher that would make sense for the rumored 4-inch iPhone. Instead of having one row of icons, there are two, and the tweak includes a couple pages for music controls and quick access to device settings. Apple could add to the current multitasking switcher tray by implementing similar enhancements.

Quasar lets jailbreakers have windowed app management on the iPad, and while it’s a great feat of engineering, Apple is unlikely to approach iPad multitasking the same way. The magic of an iOS device is its ability to essentially become any given app. When you tap an icon, the app fills the screen. Traditional app windowing seems like a step backwards, but that’s not to say the iPad doesn’t deserve a multitasking upgrade.

Apple introduced the iOS 5 Notification Center last summer, and the feature was a very welcomed improvement to the way iOS handled incoming notifications. Instead of an obtrusive dialog box for each incoming message, Notification Center will display messages as banners at the top of the screen. You can customize which apps notify you in a certain way and so on. All notifications are collected on the iOS lock screen and a handy window that can be pulled down from the top of the screen at any time.

While Notification Center is definitely a step up, Apple could take it to an even higher level in iOS 6.

Collapsable notifications. The ability to reply directly to messages without entering an app. A swipe gesture to clear notifications. The ability to quickly clear app badges. Something that looks better than that terrible grey linen. These are only a few of the improvements we’d like to see Apple make to Notification Center. Jailbreak tweaks like Bulletin and BlurriedNCBackground accomplish some of these things already.

And why not implement something like SBSettings for quick access to system toggles? Instead of having to open the Settings app to turn WiFi off, you could simply toggle it off right in the Notification Center window.

Jailbreak extensions like biteSMS and Messages+ turn Apple’s stock Messages app into a real powerhouse. Instead of having to open the actual app to reply to texts, you can quick reply anywhere in iOS as the messages arrives. Messages+ lets you compose a new message by performing a swipe gesture with your finger, and messages can be dismissed for viewing later. Those subtle, yet powerful, improvements Apple could add to Messages to make it a truly efficient app.