Have you ever wished you could use Siri to control Spotify instead of Apple’s Music app on your iPhone? How about using Siri to get directions with your favorite GPS app?

A really cool jailbreak tweak called AssistantLove was released today in Cydia that lets you do those things and more.

If you’re a Spotify Premium subscriber with the official iPhone app, you can use Siri to access the millions of songs from the Spotify library. Turning on the Spotify integration in AssistantLove lets you say “play Rick Astley” or “play Poker Face” like you would for the default Music app.

I noticed that Spotify wouldn’t always get my request right, but that’s to be expected when it’s having to look through so many similar artist names and track titles. I wish the experience was a little more accurate, as I really don’t want to listen to Rick Ross when I’m in the mood to rickroll the Cult of Mac readership. Hopefully playback accuracy will be improved over time.

Another really cool feature of AssistantLove is the GPS/Siri integration. That’s right, you can finally use your favorite GPS app with Apple’s digital assistant. The tweak currently supports TomTom, Waze, MotionX-GPS and Navigon. I tried saying “find directions to Walmart” and Siri showed me a list of the nearby Walmarts with Google Maps data. Tapping the closest location launched Waze so the app could give me turn-by-turn directions. 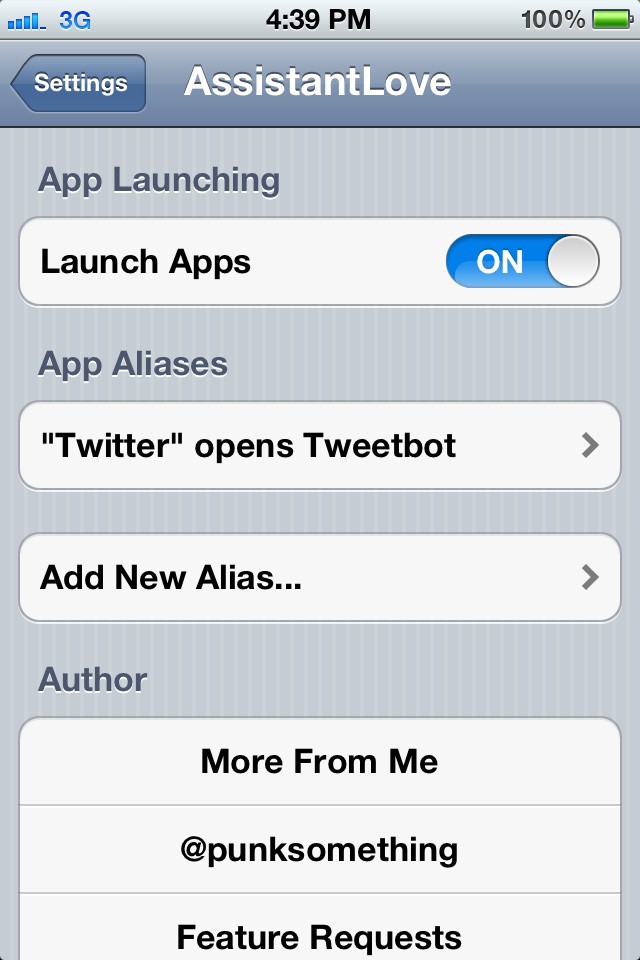 AssistantLove intelligently launches apps with Siri. For instance, saying “open Battlefield” will open the Battlefield 3 game you have installed. You can also add aliases for apps, so you could have “open Twitter” set to launch Tweetbot.

“Many more features are planned” for AssistantLove, according to the developer. You can submit feature requests in the tweak’s preferences inside your iPhone’s Settings app. It will cost you $1.99 in Cydia.

We’ve also got a roundup of the best jailbreak tweaks to enhance Siri on your iPhone.