Avid has been making professional video editing software for decades, and with the introduction of the “pro-sumer” Final Cut Pro X, many industry leaders have turned back to Avid for their editing needs.

Interestingly, Avid has launched an official app called Avid Studio for the iPad. With more features than the iMovie iPad app, Avid Studio is the first semi-professional editing tool to hit Apple’s tablet.

Big-screen moviemaking comes to the touchscreen with Avid® Studio for iPad. We’ve distilled the world’s leading film-editing technology into an easy-to-use app that enables you to edit video, audio, and photos at the speed of your creativity.

Swiftly arrange your clips in the Storyboard, make precision edits using the Timeline, and add high-quality transitions, effects, and a soundtrack. Then share your movie directly to YouTube, Facebook, and more—or export your project to Avid Studio for the PC and continue editing with even more advanced tools.

Gesture-based video editing looks pretty slick in Avid Studio. There are some Apple-like animations you can add to clips as well. Here’s what Avid had to tell AllThingsD about the release:

“We’ve seen a shift in how creation is happening, and it’s really happening on almost any device,” said Tanguy Leborgne, vice president of consumer and mobile technology strategy at Avid. “We think the tablet is more than just a consumer device; more and more people are creating on it.”

Steve Jobs also touted the iPad as a content creation tool during its original unveiling in 2010. You’re obviously limited on a tablet like the iPad. Files must be able to fit onto the iPad’s onboard memory since you can’t use a scratch disk for editing, and you can’t export to DVD or CD. Luckily, Avid does allow users to transfer projects to and from the Avid Studio app via iCloud or iTunes. 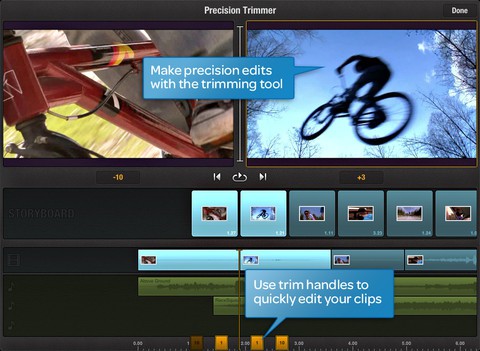 You can download Avid Studio in the App Store for an introductory price of $4.99. The price will increase to $7.99 next month.