Now that you’ve successfully jailbroken your iPhone 4S running iOS 5, what do you install? Whether you’re new to Cydia or a jailbreak veteran, we’ve gathered a list of the best jailbreak apps available for Apple’s latest smartphone. 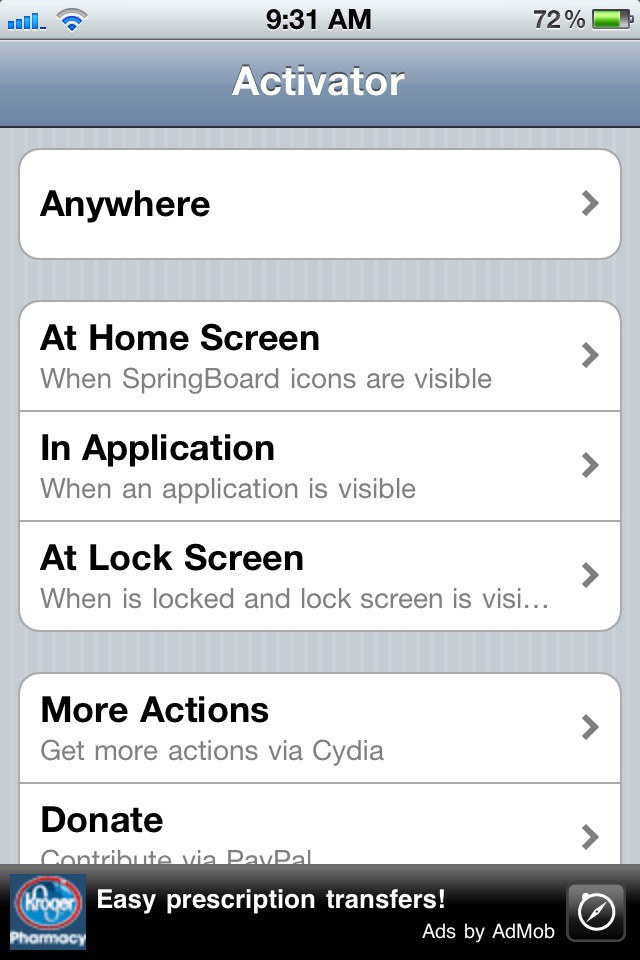 Think of Activator as the key to unlocking limitless shortcut possibilities on your iPhone 4S. Many jailbreak tweaks use Activator to let you trigger actions from anywhere in iOS (double tapping the status bar, triple tapping the Home button, etc.), and you can also assign some stock actions in Activator for controlling basic aspects of iOS. Download Activator for free in Cydia. You’ll be glad you did. 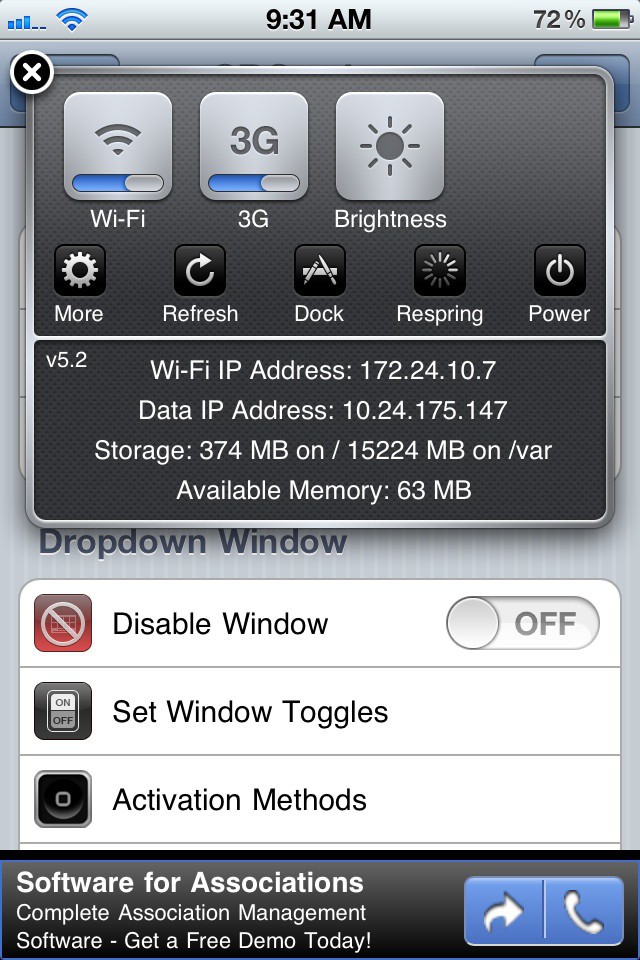 SBSettings has long been the reason to jailbreak the iPhone. The simple shortcut utility allows you to access all of the system settings you toggle daily with a quick Activator action. For example, you could double tap your iPhone’s status bar to trigger a panel of settings, such as Bluetooth and WiFi, and turn features on and off at the blink of an eye. SBSettings is free in Cydia, and you can also download lots of free themes to change the panel’s look to match your Home screen. 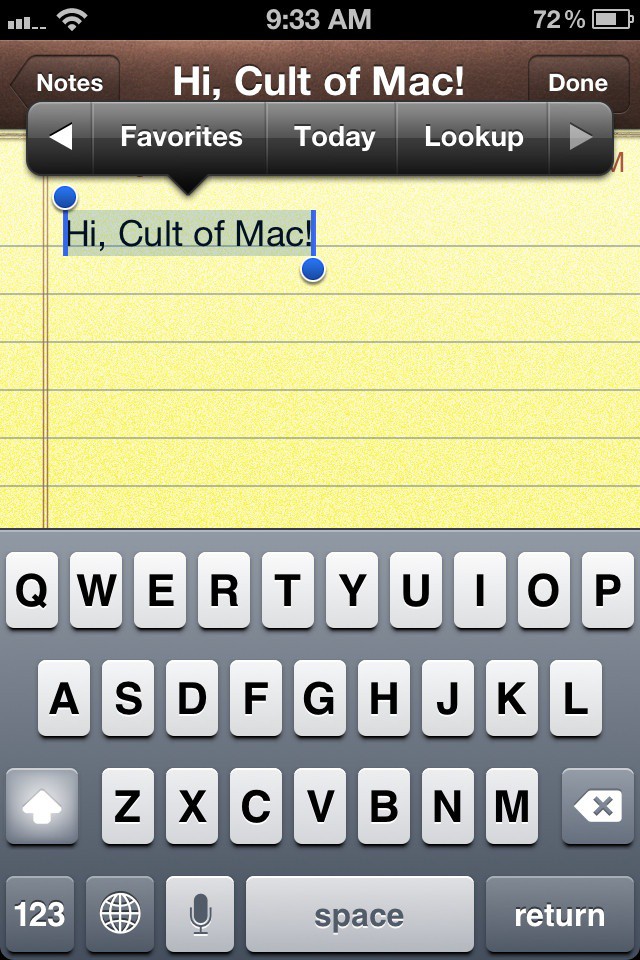 As another staple tweak for new and old jailbreakers alike, Action Menu enhances your default iOS copy/paste menu with added features and options. You can tweet highlighted sections of text, look up definitions quickly, see your clipboard history, and more. While Action Menu is free, you can get the Plus Pack for $2.99 with added enhancements. 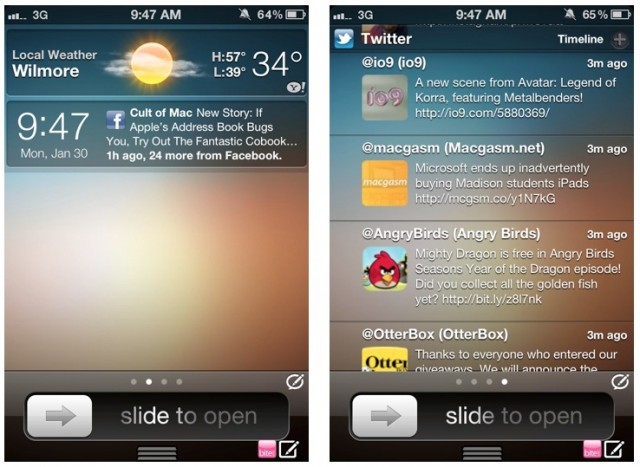 If you need a legitimate reason to jailbreak your iPhone 4S, look no farther than IntelliScreenX. This insanely detailed extension takes your iOS 5 Notification Center to the next level. IntelliScreenX brings functionality to the Notification Center drop-down window that Apple should have included by default. Not only can you toggle settings like WiFi, 3G, Airplane mode and others, but you can view things like RSS feeds as well. There are multiple pages added to your Notification Center for quickly checking your Mail, Twitter and Facebook. Everything you need to see is in one place. Get this great tweak in Cydia for $9.99 with a free trial. When you purchase IntelliScreenX, you get a nifty tweak called Messages+ as well. 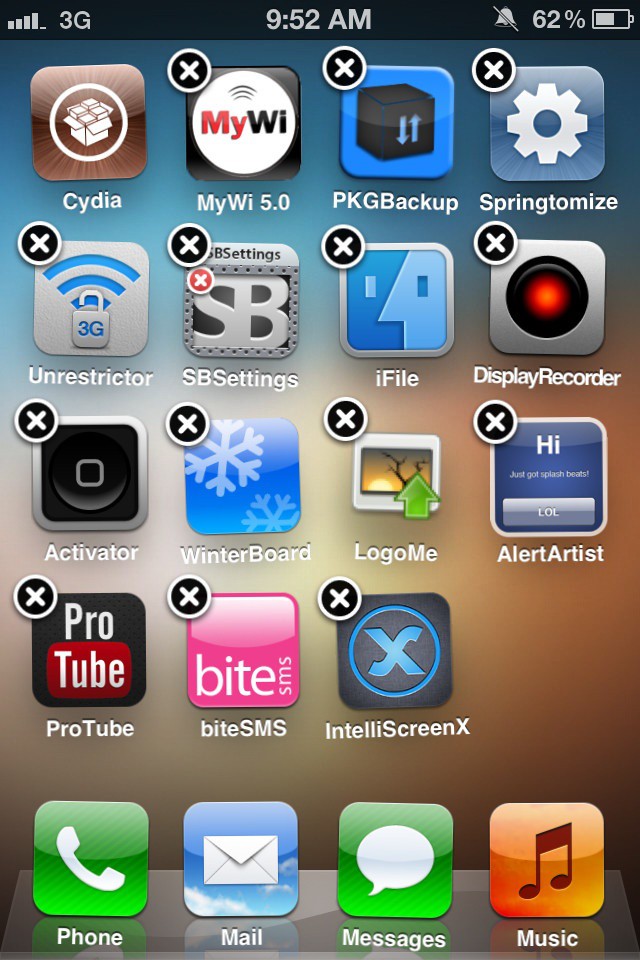 CyDelete is a dead simple tweak that lets you delete Cydia apps from your iPhone’s Home screen like regular apps from the App Store. You’d think that such a thing could be done by default, but you actually need CyDelete to make it happen. It’s a small annoyance, but one that can be easily alleviated with this free jailbreak tweak. 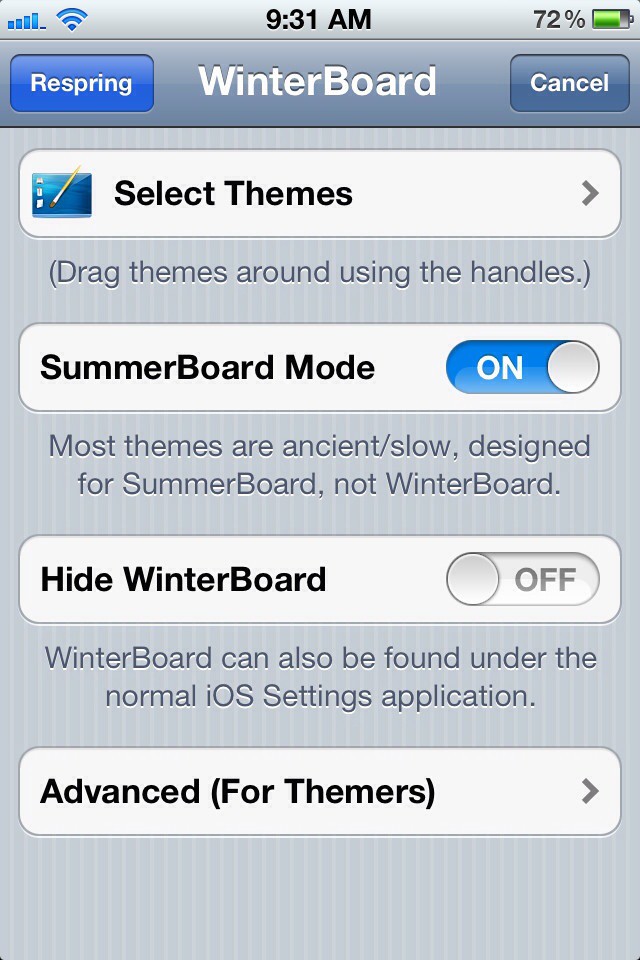 One of the many perks of jailbreaking is the ability to theme your iPhone. You can make iOS look like just about anything, whether it be Windows Phone 7 or even Android (we know, ew.) Winterboard is another jailbreak app that many other themes and mods rely on to work properly, so it’s probably best that you download it for free in Cydia. 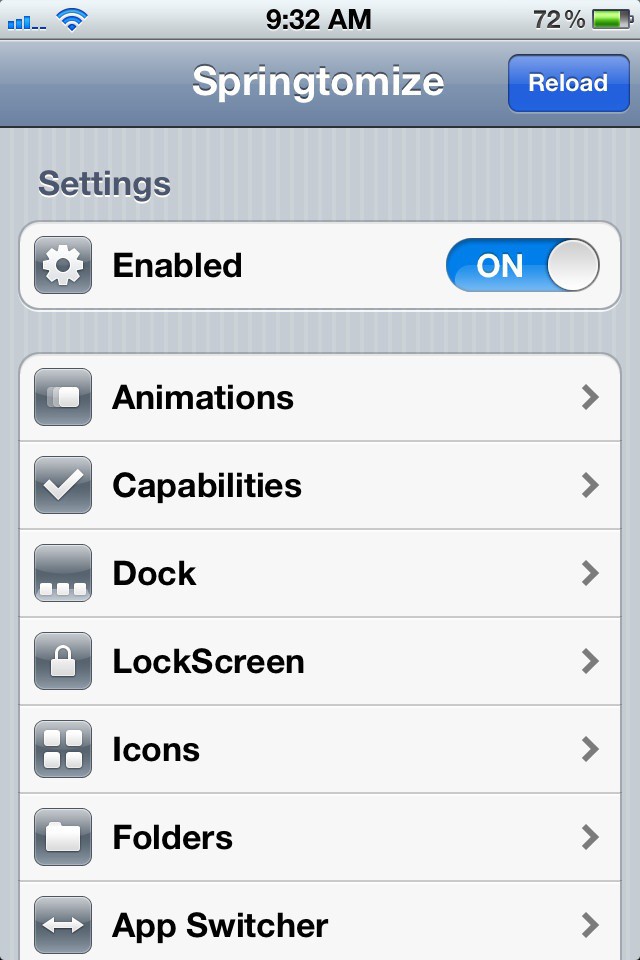 It’s difficult to explain Springtomize because it literally does everything. Springtomize 2 is the combination of dozens of other miscellaneous jailbreak tweaks that have been in the spotlight over the years. You can change how many icons you have in your dock, what’s in your status bar, how your iOS folders behave, various animations, and much, much, more. If you’re itching to tweak your iPhone’s setup, there’s bound to be something worth while that Springtomize offers you. It’s available in Cydia for $2.99. 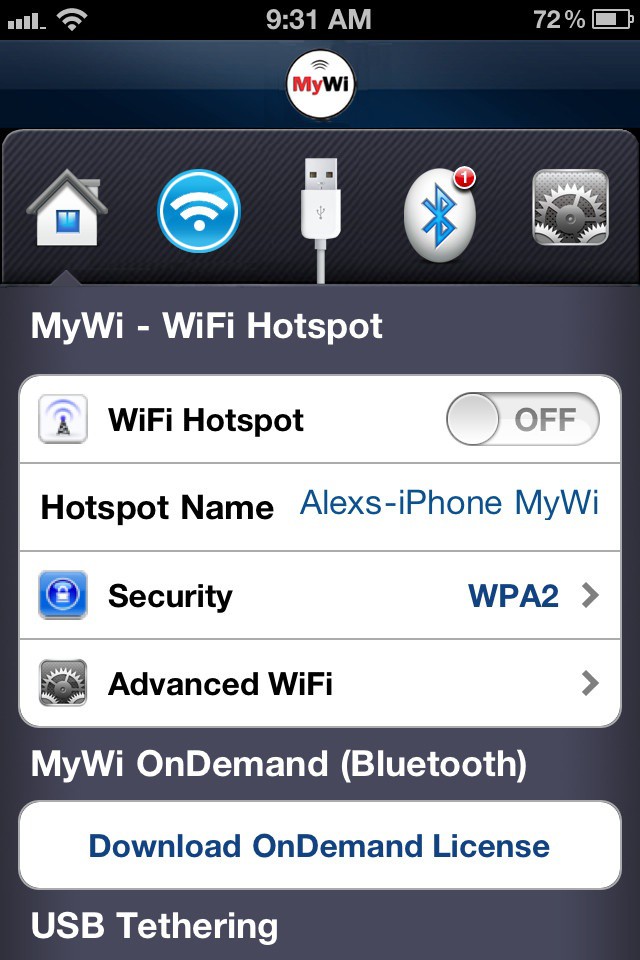 MyWi is widely considered the ultimate tethering tool for jailbreakers. You can use your iPhone’s 3G connection to create a WiFi hotspot for your other devices. There’s also options for tethering via USB to a specific computer or even sending your 3G iOS device’s signal over Bluetooth. You can password protect your signal so others don’t steal your precious data. If you don’t have an unlimited data plan, be careful that you don’t go over your allowance while tethering. MyWi 5 is available in Cydia for $19.99 with a free trial, but hey, it’s better than having to pay your carrier monthly for the same functionality! 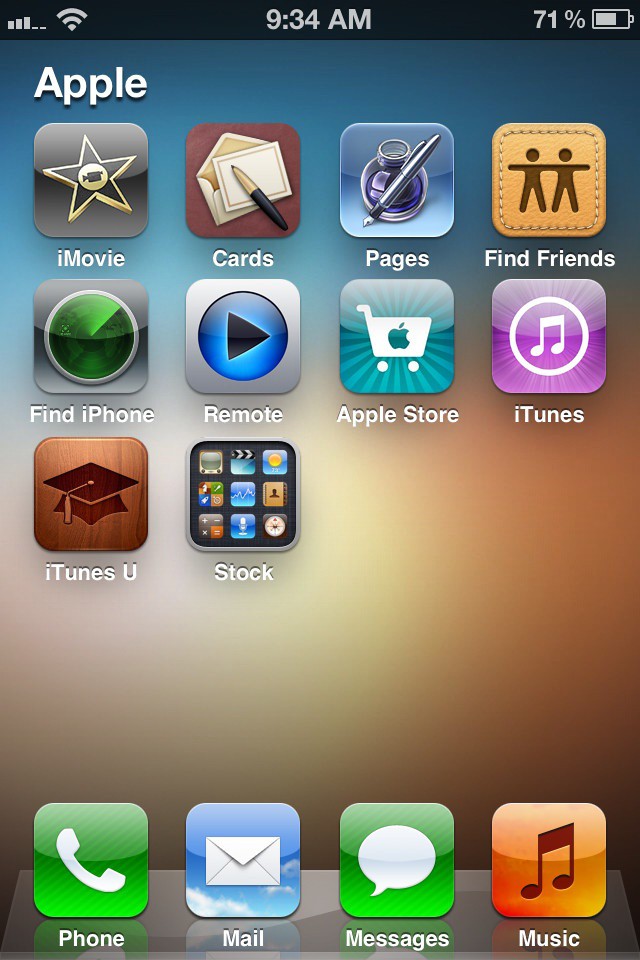 As the ultimate jailbreak tweak for bringing your iOS folders to life on the iPhone 4S, FolderEnhancer is definitely worth its $2 price tag. You can add folders within folders, change folder backgrounds and animations, and add an infinite numbers of apps to each folder. Very nice. 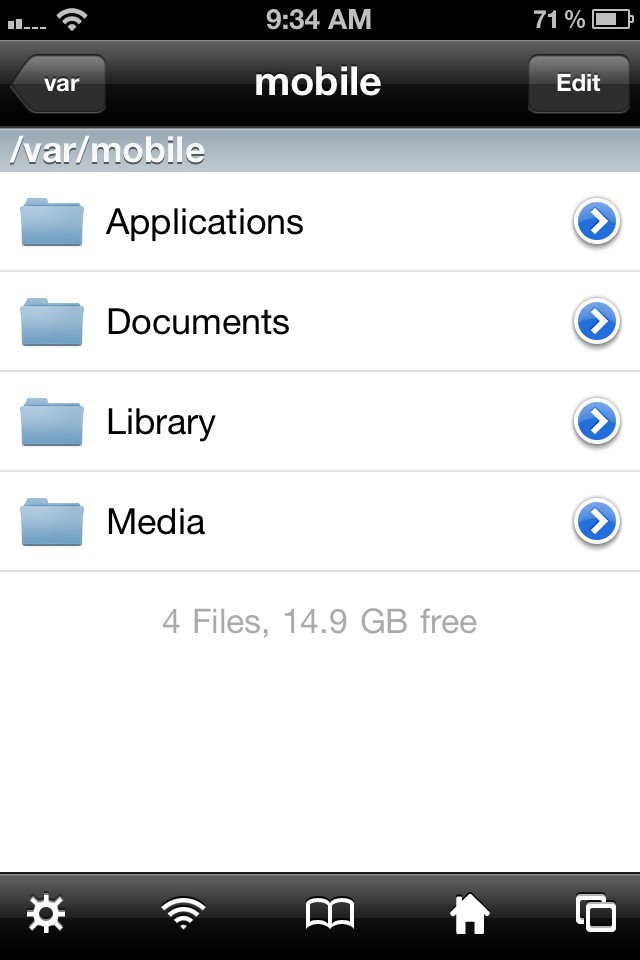 Think of iFile as Finder for your iPhone. Apple hides the iOS filesystem by default, but iFile reveals all to devious jailbreakers. You can use iFile to perform manual installs or file edits on the iPhone 4S itself, or even use your device’s onboard memory as a USB drive of sorts. iFile is an essential jailbreak app for the power user. And it’s only $2 in Cydia. 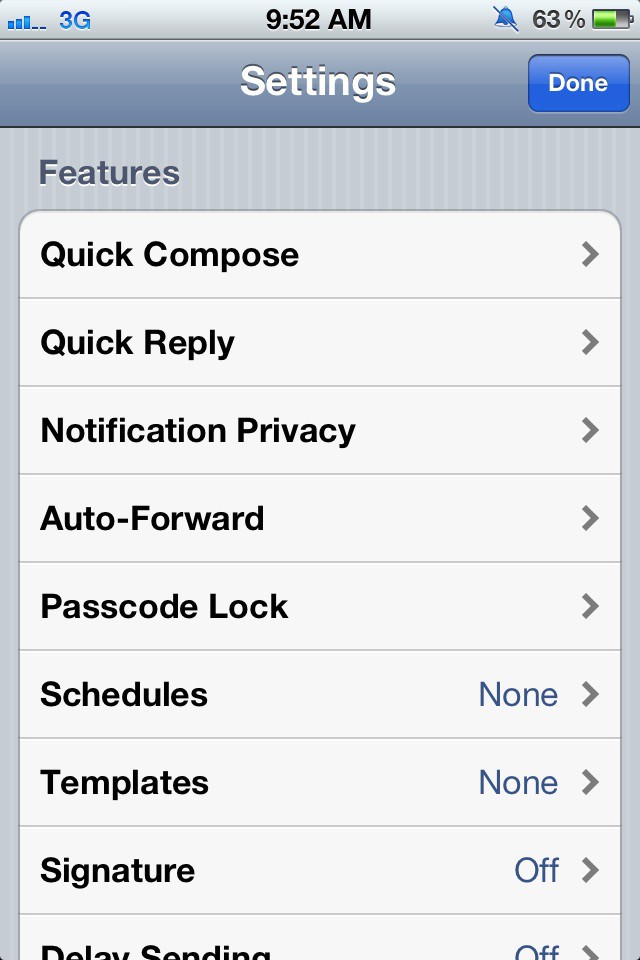 As a long-time hall of fame jailbreak app, the latest version of biteSMS replaces the default iOS messaging system. You can quick compose and reply to incoming SMS messages from anywhere, including the lock screen. Version 6 has been optimized for iOS 5, and biteSMS is still the best way to text on the iPhone. The app replaces your default Messages app, but you’ll probably be glad you made the switch. The only downside is that biteSMS will cost you about $9 after the free trial. That’s nearly the price of two large coffees. 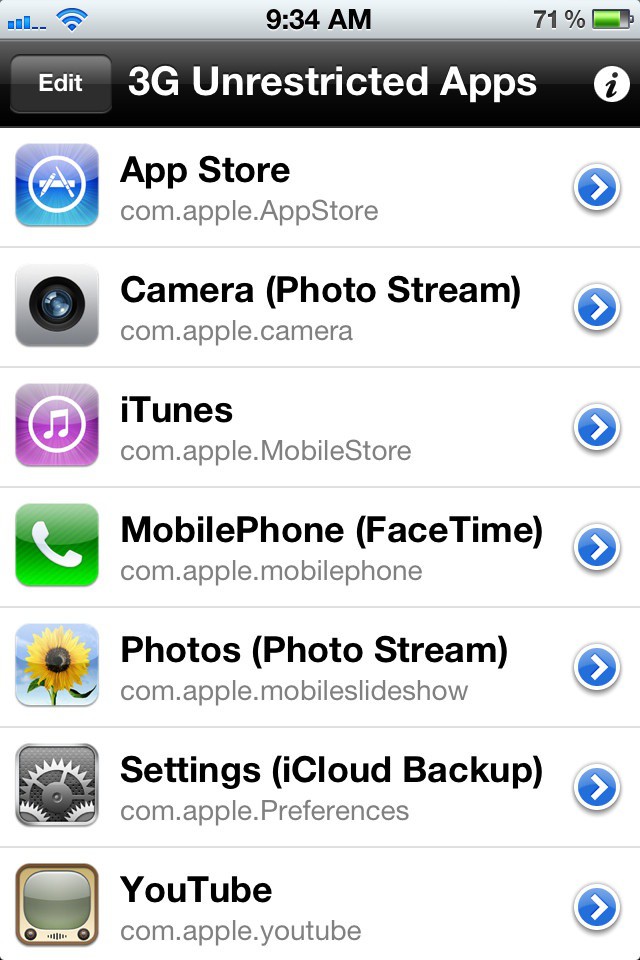 3G Unrestrictor says it all in its name. With this powerful app you can make FaceTime calls, watch HD YouTube videos, upload to PhotoStream, download large apps from the App Store, and more over 3G. Boom. Such magical powers will cost you $4 in Cydia. 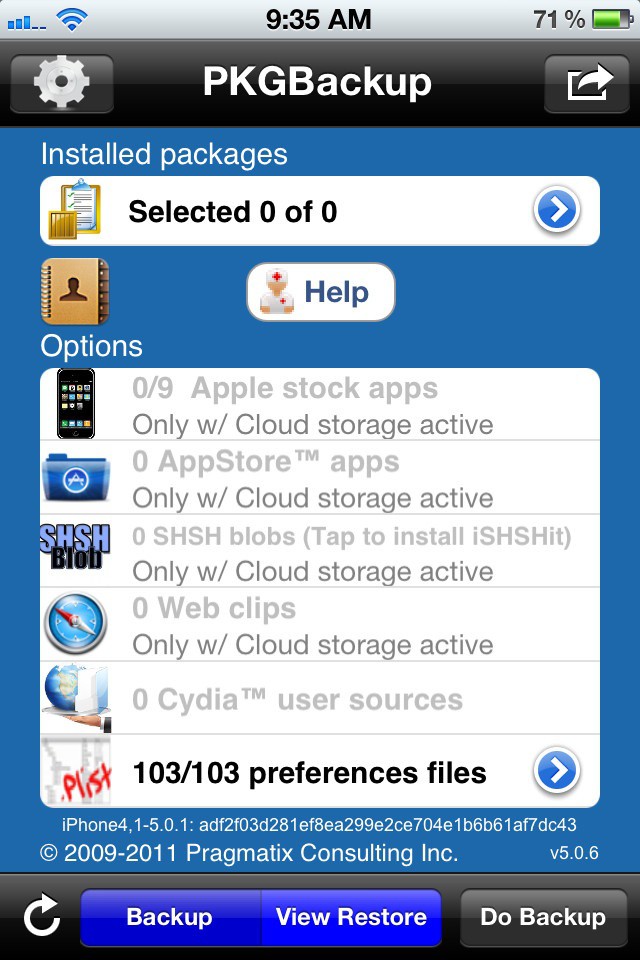 Jailbreakers don’t have the luxury of backing up their Cydia apps to iCloud or iTunes, but that doesn’t mean we can’t still have our configurations stored away for safe keeping. Although all of your Cydia purchases can still be downloaded again for free on another iPhone if you re-jailbreak, it’s still a good idea to have a secondary backup. PkgBackup can use Dropbox to wirelessly backup your data to the cloud. You can store all of the gritty, jailbroken details away for a quick restore later. It’s much better than installing everything manually when you jailbreak again, and well worth the $8 price tag. Peace of mind don’t come cheap. 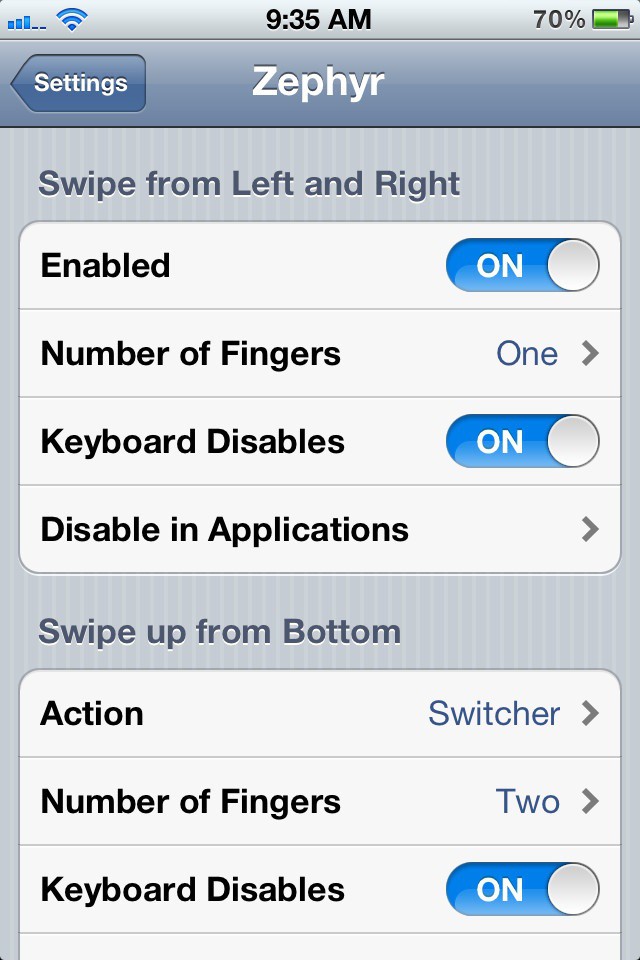 Zephyr is a brilliant tweak that brings multitouch gestures the iPhone has always needed to jailbreakers’ fingertips. You can use simple, intuitive, iPad-like gestures to access the multitasking tray, switch between apps, and more on the iPhone 4S. Grab Zephyr for $3 now. 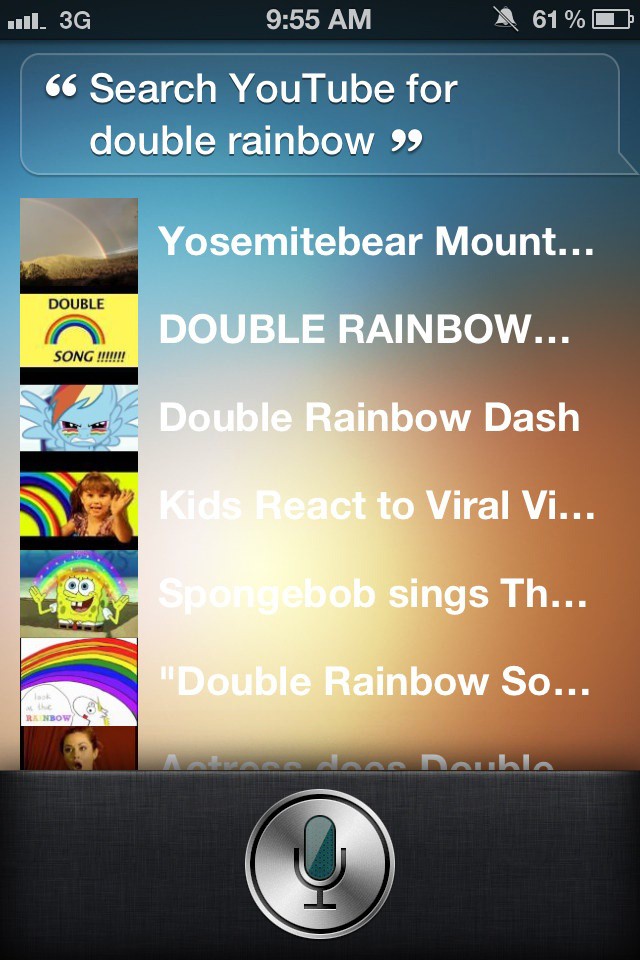 You can think of AssistantExtensions as the ultimate jailbreak tweak for enhancing Siri on the iPhone 4S. With this incredible tweak you can use your voice to compose tweets, open all your of apps, search YouTube, and more. The best part is that AssistantExtension allows for developer plugins, so expect more great features from this powerful tweak. Did we mention that it’s free?

Reveal lets you view longer messages in the iOS Notification Center. The $2 tweak enables the ability to scroll through long messages in notification bubbles and tap to expand messages from the lock screen. Banner notifications can be viewed in their entirety by scrolling from right to left. 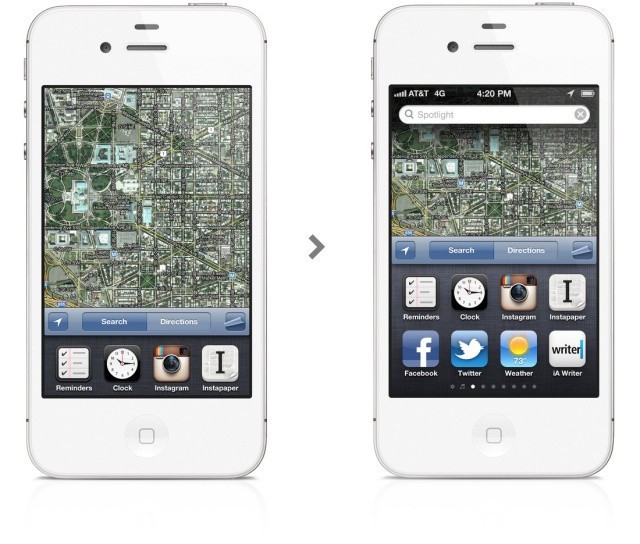 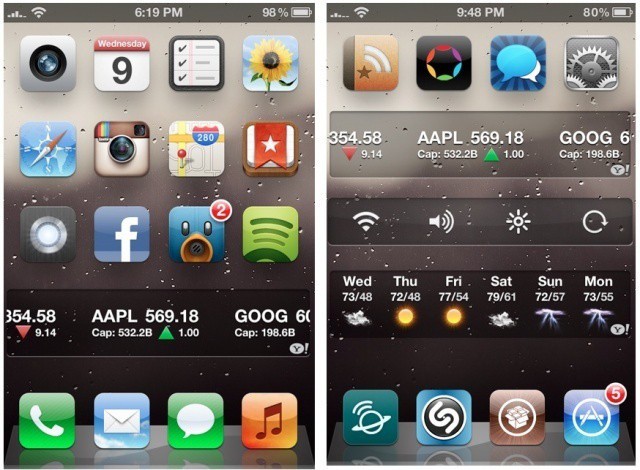 Adding widgets next to your app icons is super easy with Dashboard X; just tap and hold an icon to enter “jiggle mode.” Then tap a blank space on your Home screen (you may need to rearrange icons to create space) and hold your finger down for a couple seconds. A window will pop up with a list of available widgets to add. Tap the widget you want and you’ll be greeted with a couple options. You have the ability to disable “Interaction” and “Auto Center.” The former setting lets you interact with a widget or make it essentially part of your device’s wallpaper. The latter option snaps the widget into a centered position wherever you add it on the Home screen. Toggle these settings as you see fit and tap “Add Widget.” Said widget will suddenly float on your Home screen. Once you have it where you want it, tap your Home button to exit jiggle mode and lock the widget in place. Boom!

Dashboard X is the king of widget extensions for any jailbroken iOS device, and it costs $2 in Cydia. 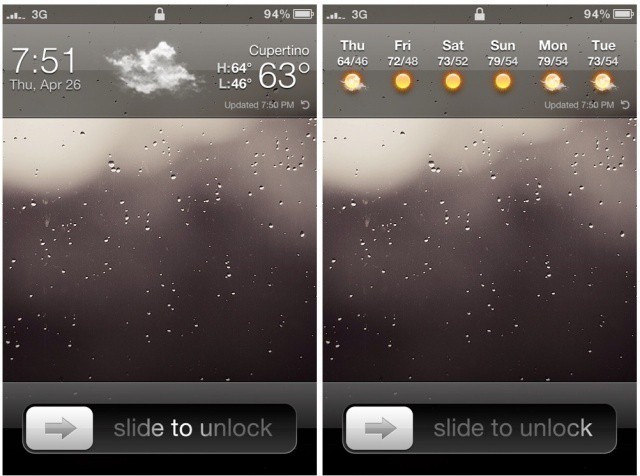 Forecast is a $1 Cydia tweak that gives you an overview of weather information right on your iPhone’s lock screen. The tweak is relatively simple, as there are no real settings to configure. To use it properly, make sure you go into the Weather app and turn off “Local Weather.” Then drag the location you wish to have displayed on your lock screen to the top of the Weather app’s list. Your lock screen will be immediately updated with the correct weather info for that city/region. 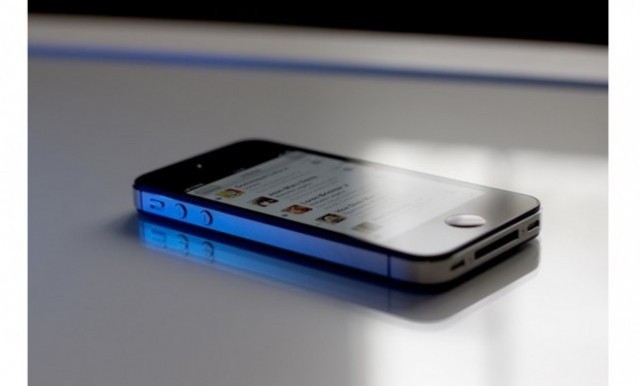 Sparrow+ is a tweak, available to download now in Cydia for $3, that allows you to receive Sparrow notifications every time you receive an email, so that you no longer need to keep opening the Sparrow app and checking for notifications yourself.

What’s more, the tweak also makes Sparrow your default email client. This is something that Apple does not allow iOS apps to do, so unlike push, this will never be an official part of the Sparrow app. By making Sparrow your default mail client, the app will open automatically when you click on email addresses within other apps — just like Mail does right now.

A jailbreak tweak called Stride brings better-than-Android-like gestures to your iOS lock screen. Stride costs $3 in Cydia. Gone are the boring days of the ‘slide to unlock’ bar. Now you can unlock your jailbroken iPhone with a pre-set gesture of your choice! 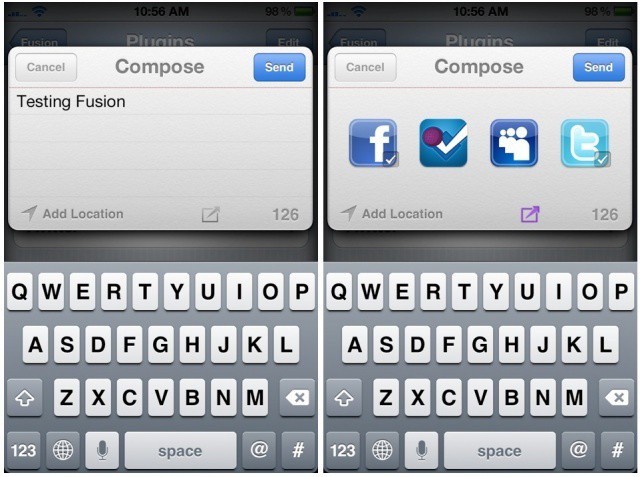 This nifty tweak integrates multiple social networks into iOS 5, and also lets you post updates to multiple networks with Siri. It costs $2 in Cydia.

Fusion comes with plugins for Facebook, Foursquare, MySpace, and Twitter. Since Twitter is already integrated into iOS 5 by default and you’ve presumably given the OS your password, you won’t have to set anything up for Twitter in Fusion. A bug I noticed is that you need to reboot your iPhone to have the Fusion plugins displayed in Settings. If you install Fusion and don’t see any plugins, respring your iPhone and everything should work fine.

For each social network, you can log into your account, give it access to your GPS location (that’s key for Foursquare, obviously), and enable Auto-Selection. When you post an update in the Twitter compose window, enabling Auto-Selection means that those networks will automatically be checked to also update.