After an unexplained absence, Apple products have officially returned to NBC’s The Office, which wrapped up its seventh season last night.

But as of late, HP replaced Apple for “promotional consideration”, as evidenced by the closing credits. Apple products continued to appear on occasion, but only discretely, the logo always obscured.

END_OF_DOCUMENT_TOKEN_TO_BE_REPLACED

This is a guest interview by Mike Bastoli of The Pixar Blog, a popular news blog about the studio.

Lee Unkrich is the director of Disney-Pixar’s Toy Story 3, the highest-grossing animated film of all time, which was released on DVD, Blu-ray and iTunes today. He also served as co-director of Toy Story 2 and editor of Toy Story, and is a member of Pixar’s Senior Creative Team.

Unkrich is an avid Mac user and Apple ‘addict’ who can be spotted at Apple’s events from time to time. “Whenever I’m invited, it’s something awwwwwwesome,” he tweeted to his 80,000 plus followers on Twitter ahead of the launch of the iPad in January.

Here’s an exclusive interview with Unkrich, who talks about his first Mac, Apple cameos in Pixar’s movies and Steve Jobs feeding his Apple addiction.

END_OF_DOCUMENT_TOKEN_TO_BE_REPLACED

In “The Proposal,” Sandra Bullock plays a Canadian-born, bulletproof book editor who finds herself stuck in Sitka, Alaska while waiting to marry her assistant to get a green card.

After her cell phone gets stolen by an eagle, she picks up a replacement at the town general store — what could be more Alaska? — and then goes to the only Internet cafe around.

And has to answer all of her 37 urgent messages with a handful of dimes on a coin-operated modem system — via a iMac G3.  This in stark contrast to the late-model iMac she had in her New York fiefdom. 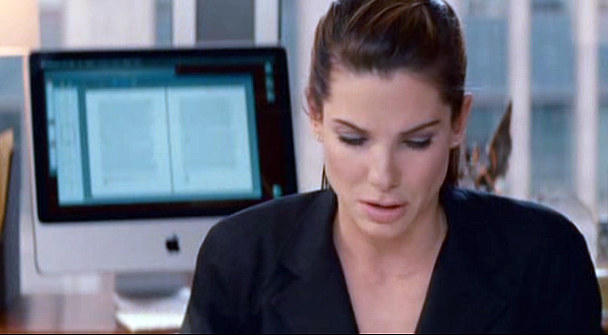 It was one of the only bits in the movie that made me smile. I kind of wish I hadn’t sold mine, old as it was…

If you’ve ever wondered what the point of those flashlight apps are, wonder no more: they are kick-butt investigation tools.

The next time you need to crawl down a 150-foot electrical conduit and don’t have a flashlight —  your iPhone can light the way, a recent episode of CSI reminds us.

In a cheesy bit of iProduct placement, the actor hands his iPhone-cum-flashlight over to the guy who will have to brave the crawl space saying “There’s an app for that.”

There are a bunch of these apps on iTunes, most are free, ranging from Funny Flashlight to myLite (also has strobe effects), with jokey descriptions like “Are you scared of the dark?”

Has anyone found the flashlight app handy — aside from helping solve heinous crimes?

Via Art of the iPhone

In “Burn After Reading,” the Coen brother’s black comedy about privacy and politics, Brad Pitt plays Chad, an amiable goof who works in a gym.

Along with co-worker Frances McDormand, who thinks plastic surgery will buy her love, he tries to sell a memoir from a former CIA agent found in a diskette left behind at the gym. 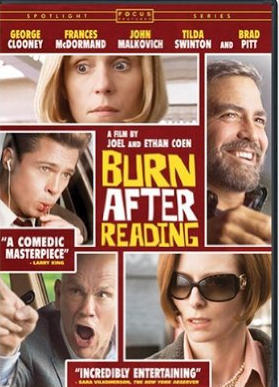 Chad is almost always plugged in to an iPod (and singing out loud) even when he’s on a stake out — as shown in the movie poster. Pitt doesn’t have a big part, but gets a lot of mileage out of playing a dim bulb in a stellar cast including George Clooney,  John Malkovich and Tilda Swinton.

In the celluloid version of Brit Toby Young’s memoir about life at Vanity Fair in New York, Macs are the mark of who counts and who doesn’t.

END_OF_DOCUMENT_TOKEN_TO_BE_REPLACED

Here’s an early Mac movie product placement. In the opening minutes of 1989’s “Back to the Future II,” Marty McFly lands in 2015, where hover cars loom, “Jaws 19” in 3D plays in movie theaters and folks sport layered outfits that only a daltonic could love.

In an antiques store, Michael J. Fox does a double-take over a “vintage” Mac sitting next to other 80s relics like a Dust Buster and a bottle of Perrier.

Found on the excellent Starring the Computer, where James Carter has compiled a few other early Mac movie sightings including “Manhattan Project” and “Star Trek IV: The Voyage Home,” both from 1986.

Anyone remember Mac movie appearances before 1986?

Eagle-eyed CoM reader Joaquin Jang spotted what looks like a either a Pismo, the last G3 PowerBook launched in 2000, or its close cousin, the Lombard PowerBook G3 laptop launched a year earlier, in a recent Wells Fargo bank banner.

He writes, “Imagine my surprise when I went to log in to my bank account at Wells Fargo’s website and found this picture which appears to show my first Mac laptop, the Pismo, it could also be a Lombard which had a similar form factor.
While the Pismo still does some work for me, it’s not my everyday machine since it is nearly ten years old. Yet, it still makes it into a website ad nine years after it was introduced.”

So, which one is it?

Many thanks to Joaquin for the tip and screenshots.
CoM readers: if you spot other interesting Macs starring in ads, let us know!

Apple products are a natural for high falutin’ teen drama “Gossip Girl,” where just about everything the upper East Siders use has a recognizable brand name.

Gossip Girl, however, is sponsored by Verizon. To keep them happy, producers artfully block the Apple logos from getting into shots, but as a result Apple’s presence is almost more consipicous than it would be otherwise. The shot on the left reminds me of the trick directors use to hide pregnant actesses by placing plants and furniture to hit just mid-tummy.

Photos courtesy of The CW

Candice Bergen, who plays the wedding planner caught between the pair of bridezillas, is shown in the trailer using Macs in a couple of shots.

Early reviews warn “Bridal Wars” isn’t worth the 90-minute commitment, citing, among other things, the onslaught of product placement.