SAN FRANCISCO, MACWORLD 2011 — Here at Macworld, people are raving about the iStreamer, a small metal box that turns your iPhone or iPad into a high-fidelity audio source by connecting it to your home stereo. 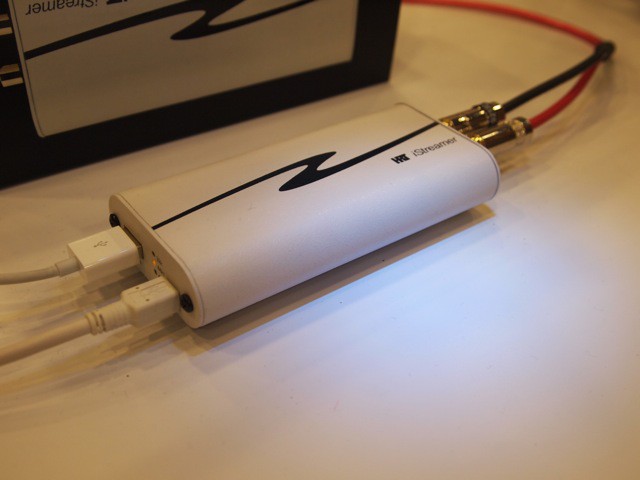 Made by High Resolutions Technologies, the $199 iStreamer is a digital-to-analog converter with a 30-pin dock connector at one end and a pair of RCA audio jacks at the other. It offloads the digital audio processing from the iPhone/iPad, and provides a better connection than the standard headphone jack.

“We had one guy whose whole music collection was on his iPad, but it sounded like crap because he was using his headphone jack as the output to his stereo,” said marketing manager Michael Mercer. “He thought it was the iPad, but it was the output. It’s not the iPad’s job to be a high-end music source.”

The iStreamer is the first and only DAC approved by Apple’s Made For iPhone/iPad/iPod” program, noted Mercer.

Mercer said the box is not designed for audiophiles, who already have a bunch of high-end audio equipment. Rather, it’s for people who are using the iPad or iPhone as their primary computing device. They are storing their music library on it, or are streaming music from services like Pandora, Last.fm or Rhapsody.

The iStreamer works with most generations of iPod, iPad and iPhone. Some early units won’t work with the iStreamer.

On the downside, the iStreamer doesn’t have digital outputs, and there are cables everywhere, a problem that will be eliminated when Apple’s AirPlay gets built into AV equipment. There are already several Bluetooth audio sources on the market, like Neuhaus Labs’ rockin’ T-1 amplifier, which also includes a built-in DAC.