TikTok pulled in more than $130.5 million in worldwide user spending in September, making it the top-grossing non-gaming app in the App Store — despite the various existential threats it faces.

In a new report by app analytics firm Sensor Tower, the company notes that user spending on TikTok in September was 7.9 times greater than this time last year. That $130m sum covers both iOS and Google Play revenue. 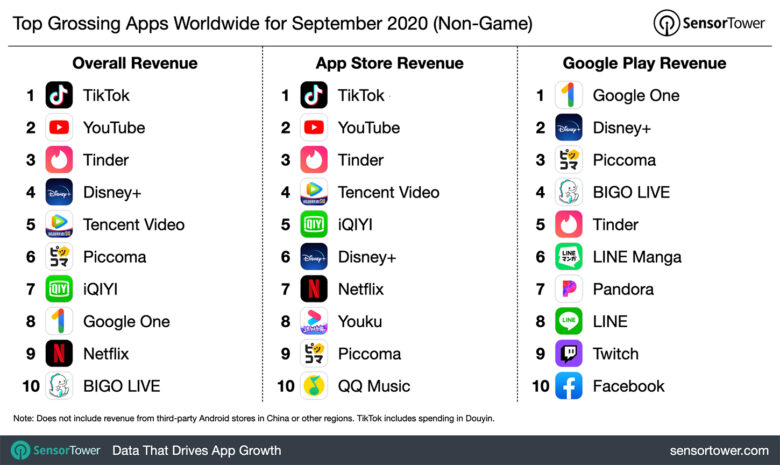 The overwhelming majority — 89 percent — of the money comes from China, where TikTok is based. The United States, by comparison, makes up just 6 percent of user spending, while 1 percent comes from Turkey.

YouTube was in second place, pulling in $85.5 million in gross revenue across iOS and Google Play. This was an impressive 56 percent year-over-year growth from September 2019. In this instance, 55 percent of the revenue comes from the United States. Tinder and Disney+ also pulled in significant revenue.

TikTok’s years so far through September

TikTok has had what could, as an understatement, be called a mixed year. In the first quarter of 2020, it recorded what was the best three months of any app ever when it comes to downloads.

However, it has also been targeted as a possible security concern concern by the Trump administration. In the latest developments, a Washington judge recently blocked Trump’s attempt to ban the app in the United States. TikTok now has a stay of execution until at least November. Along the way, TikTok’s CEO Kevin Mayer resigned in August after just three months in the post. He blamed the “political environment” for his decision to stand down.