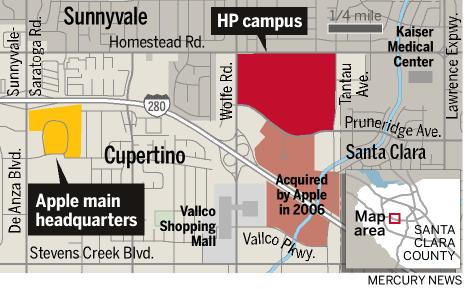 Apple has become the largest landowner in Cupertino, Calif., the city which headquarters the computer and media giant. Apple recently purchased for a reported $300 million a 98-acre campus which formerly housed Hewlett-Packard. The site adjoins Apple’s 50-acre site it purchased in 2006.

“We now occupy 57 buildings in Cupertino and our campus is bursting at the seams,” Apple PR chief Steve Dowling told the Mercury News. “The offices will give us more room for our employees as we continue to grow,” he added.


According to the report, the former HP site “housed parts of that [HP’s] personal computer division as well as some of its commercial software and hardware units. It’s also home to a high-tech ‘briefing center’ where HP holds meetings and shows off products to corporate clients.”

The additional land could make it easier for Apple to get permission to rezone the area, currently set aside for residential use. Apple CEO Steve Jobs, who attended high school in Cupertino, earlier said about the 2006 purchase that there were more affordable locations, the but site “was something where we could stay in the area that we like the best.”

Apple made Cupertino is headquarters in 1977, shortly after co-founder Jobs and Steve Wozniak moved the nascent computer company from Jobs’ parents garage in nearby Los Altos.