The mysterious, rainbow-colored stage erected inside Apple Park bears all the hallmarks of the company’s meticulous design, according to an Apple document provided to Cult of Mac.

It’s the latest creation by Jony Ive’s team — and it’s just as thoughtfully and intricately designed as you might imagine.

An article explaining the project to Apple employees sheds light on just how much thought, time and intense effort went into building the rainbow Apple Stage. And Jony Ive’s ruminations on the project show he and his collaborators put a lot of thought into it.

The stage, with its brilliant arches in the colors of the old rainbow Apple logo, was quietly erected this spring inside Apple Park’s circular HQ. The structure came to light in drone footage captured recently.

Fleeting images captured from the sky show the stage nestled amid trees inside Apple Park’s gigantic ring building. The colored arches stand out against the subdued hues of the spaceship building (and the greenery within its round courtyard).

In the drone video, the vivid stage almost looks like an augmented reality object placed inside the Apple HQ.

Apple and its collaborators are supposedly rushing to complete the stage prior to a May 17 special event for employees at Apple Park. That event reportedly will do double duty. It will serve as a celebration of the formal opening of Apple Park, the sprawling headquarters of the world’s most powerful tech company. And it will pay tribute to Steve Jobs, the late Apple co-founder whose vision drove the design of the unique Cupertino campus with the spaceship-like circular building.

The multicolored arches that frame the nearly completed Apple Stage took months of hard work and meticulous planning by teams inside and outside Apple, according to an article on AppleWeb, the company’s internal platform for employee communications.

Thirty unique machined components form the building blocks for the massive rainbow arch, according to the article. The design incorporates those building blocks repeatedly, creating a structure that workers can set up and take down for special events.

Some 25,000 parts make up the colorful structure and its giant metal skeleton. The stage will likely be used by bands during Apple’s traditional beer bashes and other events.

Creating unique parts, then reusing them throughout the structure, mimics the way Apple Park came together, according to the article.

“Once we had a design, we needed to figure out how to create something that was pristine and curved, that could sit outside, would be easy to put up and take down, and we needed to do all this in eight weeks,” Marissa Parr from Tait, a company that creates custom concert staging and other essentials for live events, told AppleWeb. “To make all that happen, we realized we needed to make everything as uniform as possible, arch to arch.”

The structure’s aluminum frames include custom curved tops and bottoms individually rolled by a machinist over a 12-day period. Then workers wrapped the segments in a polycarbonate liner “that extends over the edges to create a seamless look once it’s in place,” the AppleWeb articles says.

A laminated, UV-resistant coating should keep the colorful rainbow from fading under the blazing Cupertino sun.

The custom processes employed make the brilliantly colored pieces extremely fragile, though. Since they couldn’t touch the ground or lay flat after fabrication, Apple needed to create custom carts to transport them.

AppleWeb also published a brief interview with Apple design guru Jony Ive, outlining the creative process behind the rainbow Apple Stage. We’re reprinting it below to offer more insight into how the rainbow appeared.

“If you’ve been to Apple Park lately, you’ve seen it: a rainbow has appeared in the middle of the ring. It’s the latest of Jony Ive’s team’s creations — this time crafted specially for our Apple family and the May 17 special event at Apple Park. The event is both a celebration of the opening of the new campus and a tribute to Steve. AppleWeb spoke with Jony about the design intent of this extraordinary structure.

On the inspiration behind the rainbow

Our goal was to create a stage that would become immediately recognizable as the Apple Stage. The idea for the rainbow was one of those rare occasions where the earliest thoughts worked on a number of different fronts.

There is the resonance with the rainbow logo that’s been part of our identity for many years. The rainbow is also a positive and joyful expression of some of our inclusion values and I think that one of the primary reasons the idea resonated so immediately and so profoundly with us was the form — the connection from an aesthetic design point of view. A semi-circle relates so beautifully and naturally to the form of the ring.

On the design intent

We developed the idea to be a three-dimensional object so that it could be appreciated in the round — not just the front.

If you look at a plan view of Apple Park, the rainbow occupies an almost insignificant area. But it has a relevance and impact that is disproportionate to the area it occupies.

My space in Apple Park is on the external part of the perimeter. But I can see the rainbow reflected in the ceiling all the way through to where I sit. That truly wasn’t planned but one of those lucky accidents.

We had planned the way in which the colors interplay between the discrete bands of the rainbow throughout the day making it more vital and fluid. There are some wonderful but subtle combinations and reflections.

On the creative process

Our rainbow is typical of the design team’s multi-year collaboration with the architects Foster +Partners and designers Gainsbury and Whiting.

When we designed and developed Apple Park, one of the reasons that we enjoyed such an effective and close collaboration was our shared commitment to model making and prototype building.

The rainbow’s presence and optimism is keenly felt in many places and at the end of the day — it’s hard to find somebody that doesn’t love a rainbow.” 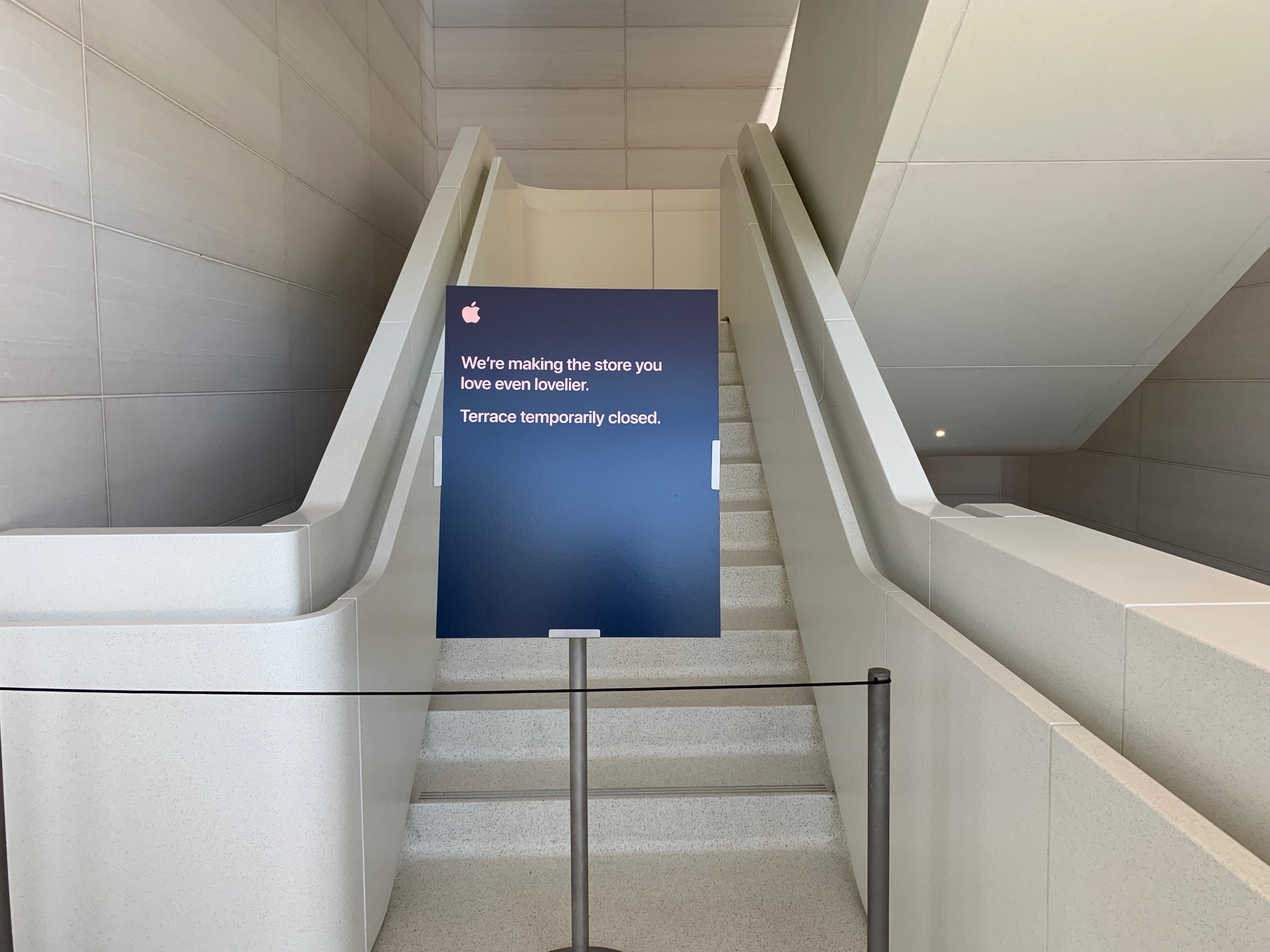 The festive rainbow stage takes its place at Apple Park alongside other unique and interesting structures, including the glass-topped, mostly subterranean Steve Jobs Theater and a 100-year-old barn from when the 175-acre property housed a working farm.

Apple Park is an impressive headquarters, thoughtfully designed top to bottom by Apple’s brightest minds. However, the massive ring building is off-limits to the public. The large Apple Park Visitor Center across the street houses a coffee shop and a store selling some limited-edition Apple products. Apple employees lead hundreds of visitors each day on augmented reality tours of the massive campus. The AR experience shows off some of the campuses secrets via loaner iPads.

The Visitor Center also has a rooftop terrace that offers the best view possible of the spaceship building. It might even offer a glimpse of the Apple Stage’s rainbow arches. But we don’t know for sure. The terrace was mysteriously closed to the public Tuesday.

Cult of Mac asked Apple for more information on the new Apple Stage. We’ll update this post if we hear back.