Any mobile photographer wearing an Apple Watch likely received a notification about an irregular heartbeat as they watched Phil Schiller talk this morning about the iPhone Xs series’ new camera.

Schiller, Apple’s senior vice president of worldwide marketing, flashed several stunning images on the screen during today’s Gather Round keynote at the Steve Jobs Theater. The images showed depth, detail and colors not seen from previous-gen iPhones, including the current flagship iPhone X.

Rather than add a third camera as many smartphone makers are currently developing, Apple instead focused on exploiting the powers of the new phones’ A12 Bionic chip to bring DSLR-quality to the photos.

Schiller called it a “new era of photography.”

A12 Bionic chip is the star of the show

Two of the stand-out features new with the latest iPhones is the adjustable depth of field in Portrait Mode and Smart HDR. Apple also unveiled a Portrait Mode setting in a handset with a single camera. The more affordable iPhone Xr can now deliver a creamy out-of-focus background, known as “bokeh,” thanks to the new A12 Bionic chip.

The chip was the star of the stage.

Among its powers is depth-segmentation mapping, which allows the entry-level Xr to have Portrait Mode. The chip also enables the adjustable bokeh, where a simple slider control in iOS’ native Camera app lets the photographer take a blurred background back to sharp. 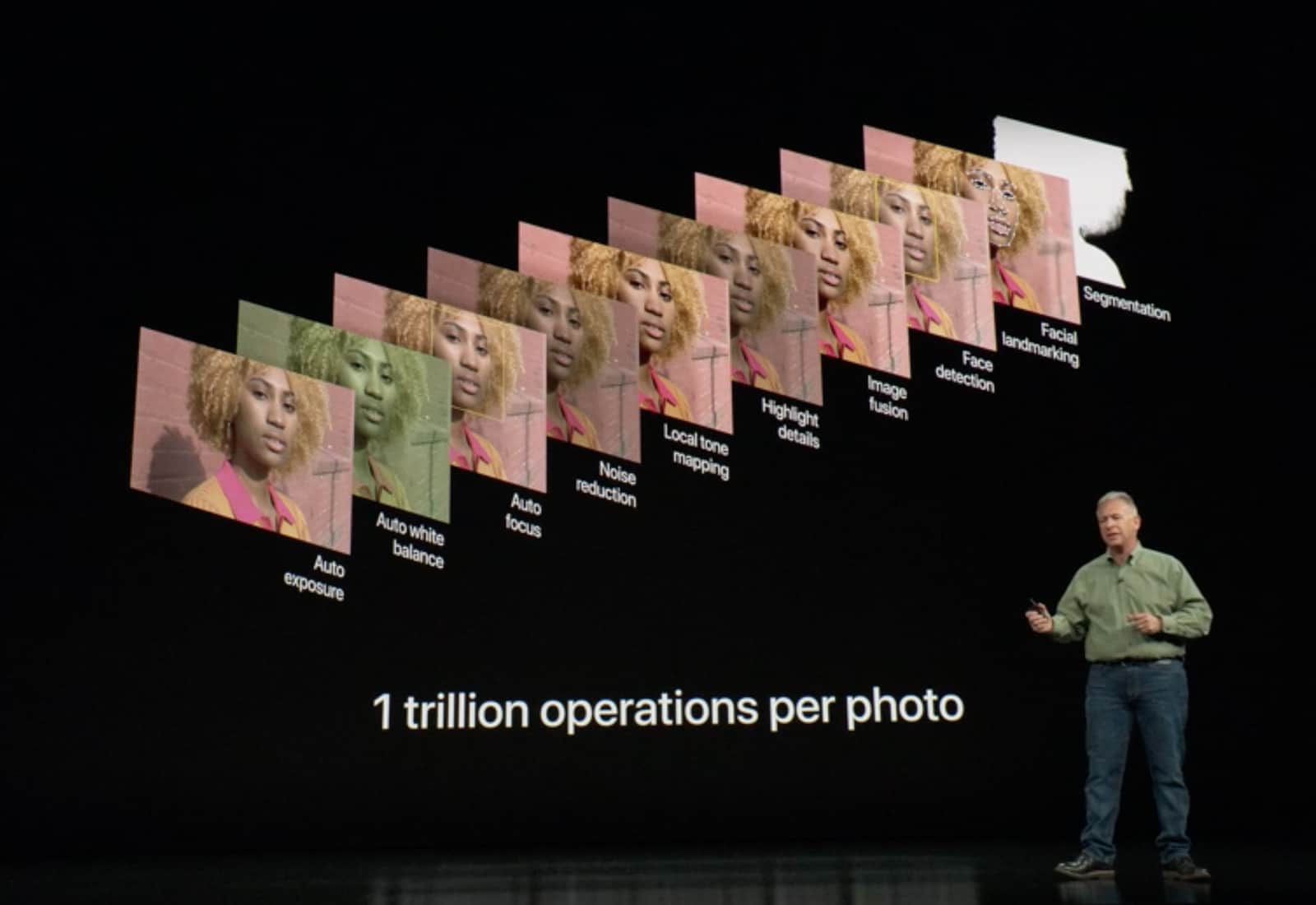 The Smart HDR, again thanks to the A12 Bionic chip, lets the photographer capture a multiple-frame buffer, including frames with different exposures. The chip then analyzes the frames and fuses them together for a greater range of highlights and shadows.

Both iPhone Xs models boast the iPhone X’s familiar dual-camera bump on the back plate, but the chip and new 12MP sensors with deeper pixels seemingly make for a new photographic experience. Schiller showed pictures where the smallest details, like individual hairs brushing across a woman’s face, pop like never before.

Apple is said to have an iPhone with a third camera slated for release in 2019, but the Xs line should give mobile photographers plenty to play with in the meantime.

Brendan Ó Se, one of the original photographers from the first “Shot on iPhone” marketing campaigns, now faces a dilemma. Which new iPhone will replace his iPhone 7 Plus? Ó Se, who teaches iPhone photography workshops, said Portrait Mode changed his street photographing, making him engage subjects more and adding a new layer of visual sophistication.

“So, which am I going to get? To be honest, I loved the (Xr),” Ó Se, of Cork, Ireland, told Cult of Mac. “It seems to hit the mark for me in many ways and I could see myself being very happy with that.

“In saying that, I feel I will splash out and get the XS Max and see where that brings me. The iPhone has brought me on a magical ride thus far and I have a feeling I am not going to slip off that magic carpet just yet.”

Another photographer from the “Shot on iPhone” campaign, Cielo de la Paz, said she will likely upgrade to the Xs Max because the larger screen is ideal for editing photos and videos. But she has to shoot with the new iPhone before declaring it groundbreaking.

“I’m a bit hesitant,” she told Cult of Mac. “I don’t think there’s anything groundbreaking about the camera. I do love the dynamic depth of field but I was already able to do that with the app Focus.

“The Portrait Mode and the upgraded bokeh looks great. I’m curious if it is in fact that much better. The Smart HDR looks like it works better than the current HDR. I’m definitely curious to see how that works. I think I will be upgrading, just because I always do.”