John Sculley may be best known to a generation of Apple fans as the CEO who made the company choose between him and Steve Jobs. But he’s also a successful investor, mentor and entrepreneur — as well as the person who increased Apple’s sales from $800 million to $8 billion during his decade at the top.

In an interview with Cult of Mac, Sculley, who ran Apple from 1983 to 1993, tells why he doesn’t wear an Apple Watch, makes the case that AAPL stock is undervalued, explains how the Steve Jobs movie twisted facts, and talks about his new book Moonshot and the future of entrepreneurism.

If you could do it over again, what would you have done differently with regard to Steve Jobs leaving Apple in 1985?

Here’s how I think about it with the benefit of several decades to look back. First of all, I fault myself. I didn’t realize that founders are special. I came from corporate America, where there weren’t “founders” in the same way that there are in Silicon Valley. Steve Jobs wasn’t in it for the money, he was in it for a noble cause: to empower individuals.

There could have been a very different outcome. We should have spent more time working out how to solve the problems in our relationship so we could work together. He may not have been the perfect manager at the time, but he was perfect in terms of being a visionary laying out a future that would eventually become clear to all of us a decade later.

What do you look back on as your greatest successes from your time as Apple CEO?

Everything I did at Apple was built around the vision that Steve had had. Even after he left, I was focused on design, finish of products, user experience. We did [things like] desktop publishing, followed by multimedia desktop presentations.

After Steve left in 1985, (Apple Fellow) Alan Kay came to me and said, “Next time, we won’t have Xerox.” I said, “What do you mean?” and he said, “Steve got a lot of his technologies from Xerox PARC.” Kay said to me that we needed to go out and find other sources of new technology.

That led to us spending a lot of time on the East Coast, at the Media Lab in MIT, where we worked with people like Marvin Minsky and Seymour Papert. A lot of that technology we ended up putting into a concept video Alan and I produced, called “Knowledge Navigator.”

That predicted that computers were going to become our personal assistants, which is what’s happening right now with things like [Microsoft’s] Cortana.

From your vantage point today, what is it that you see as the next breakthrough technology a quarter century down the line. What would a John Sculley Knowledge Navigator video be about in 2015?

First of all, don’t give me too much credit. A lot of the technical insights in the video came from Alan Kay, Nicholas Negroponte and other people working at MIT. I was the one who knew how to package and market it. That was my skill set.

In terms of how I see the future, I’m very focused on not just data analytics, but machine learning and cognitive computing. Computers are going to move from being tools for productivity to ones that can truly learn on their own and be advisers to us.

That has a huge impact on the future of work. Just as robots have taken over many of the heavy-lifting jobs in factories, we’re now looking at a future where computers will take over many of the more highly skilled jobs — whether that’s accountants or lawyers. Many of these roles will be filled by machines and skilled humans will be the assistants.

You’ve described the Steve Jobs movie written by Aaron Sorkin as “extraordinary.” Have you been surprised by the very contrasting responses the film got — with some people pointing out the movie’s inaccuracies?

Aaron didn’t share with me what the movie was going to look like, but he was clear that he wasn’t doing a biopic — he was writing what he called “a painting” that was going to take a lot of creative liberties in terms of how he organized events.

It’s not particularly accurate. As an example, people loved working with Steve [in real life]. He had a sense of humor, and was far more emotional than the movie portrayed him — which was as a little bit of a monster. That’s not how those of us who worked with him saw him.

Would I be right in thinking that you didn’t attend the NeXT Computer and iMac launches as depicted in the movie?

No, I wasn’t at those events. By the way, I also didn’t dress in suits and I don’t drink (as is shown in the movie). There were a lot of things that are factually not accurate. Jeff Daniels [who plays Sculley in the film] is also in his 60s today, and he was playing me back in 1984. If that was the case, I’d be around 95 years old today.

What is your stance on the current privacy story about Apple refusing to aid the FBI in creating an iPhone backdoor that would allow messages to be read as part of a criminal investigation?

We’re in an era where terrorism is a threat to the future of civilization. I’m sensitive to the fact that we want to know as much as we can about people who are trying to destroy us. But governments are imperfect. Giving them a backdoor to look at everyone’s private information is pretty high-risk. In all likelihood, it will at some point be abused and it opens Pandora’s box.

I’m not an expert on it, but one of the most interesting ideas I’ve heard is that, if we really need to find out information about an individual suspect, I would rather that Apple be the one that can look inside and give feedback about what they’ve found under a proper court order.

But I think the precedent should not be that Apple gives the government all of its information, but rather that Apple is the one in control if a particular circumstance arises. But please don’t put me in the position of being an expert on this subject.

You’re a very successful investor. Is AAPL a “buy” or “sell” stock to you right now?

Apple is a great company. As Carl Icahn has said, it’s got $200 billion of cash on its balance sheet and it gets almost no credit for that in the sense of its stock price. It continues to make products and sell them to people that love them.

I was recently in Beijing and there were many Apple fanatics there. Everyone in China wants an iPhone. Apple trades at an incredibly low multiple considering that it has this unique ability to sell to people who love it and will keep buying its products over and over again. And Apple’s just making it easier to trade in old iPhones for new ones.

There are lots of things I think are not reflected in Apple’s [stock price.] You could build a very good case that Apple should be worth more than it is today.

Have you had the chance to use the Apple Watch? What’s your verdict?

I own every Apple product except the Apple Watch. I have many iPads — I’m loving the new iPad Pro, which is getting panned a little bit, but I think it’s terrific. I love the iPhone; I think we have six active iMacs at home. But I don’t have much reason to own an Apple Watch. I don’t feel a particular need for it at this point in time.

It’s a beautiful device, but when do I look at a watch? Well, I look at one when I want to know what time it is. In that case, I pull my iPhone out of my pocket and look at it. I don’t even wear a watch. When do I want to be able to get a read-out of activity tracking? When I’m out running. I don’t want to carry an iPhone in my pocket, and I’m getting older so I need glasses — which means I can’t easily see the little tiny screen. Plus you have to charge it every day.

For me, there just aren’t enough compelling reasons to get one — although I think there is a future for [smart] watches as sensors get better and better. Over time, I think Apple will be successful with the Apple Watch, but it’s not something I feel I need to own now.

What are you working on right now?

I’m very lucky that the businesses I’m involved with are booming right now. One of them is a cloud-based healthcare company, which I’m very excited about. Another is a company designed to let people easily get hold of and improve their credit score using their smartphone.

And what about your book Moonshot!? Who would you like to see pick it up? 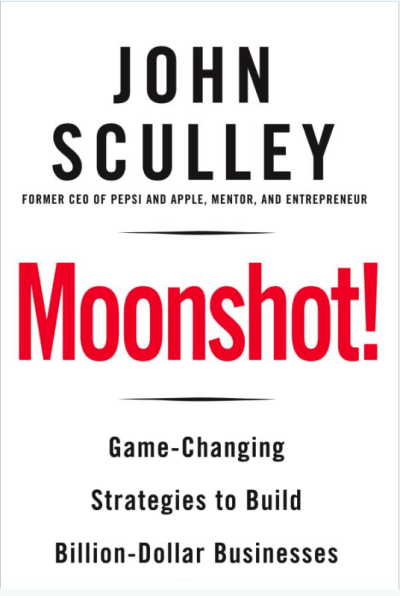 Here’s how I think about it: It used to be that people went to college to prepare them to pick up an existing job. More likely, today people go to college to learn how to create their own jobs. I’m focused on entrepreneurial capitalism. I’m a huge believer that the future of the world relies on it.

There’s never been a better time to become an entrepreneur. Not everyone has to be Larry Page or Elon Musk or Steve Jobs, but they need to understand that a power shift has taken place from incumbent institutions who have dominated industries for years to customers.

There’s a tremendous opportunity for people wanting to be entrepreneurial — and this book is aimed at them.

Finally, what is the coolest piece of Apple memorabilia that you own?

I have, sitting in my garage, a diorama created by Steve Jobs and given to me on my first anniversary at Apple. It’s about 4 feet by 2.5 feet high, and it tells the story, in photos, of my journey from Pepsi to Apple. And it’s signed by Steve.

It sat in my office at Apple while I was there, and it’s a pretty unique piece of memorabilia. It belongs in a computer museum somewhere. I just need to figure out where.

Interview edited for length and clarity.