The phenomenal success of the iPhone 6 has catapulted Apple back to the spot of “world’s most valuable brand” in the 2015 BrandZ Top 100 Most Valuable Global Brands list, after it temporarily lost the title to Google last year.

According to organizers Millward Brown, Apple increased its brand value by a whopping 67 percent to $247 billion in the last year, compared to 2014’s winner Google, which achieved “only” a 9 percent value increase during that same time. 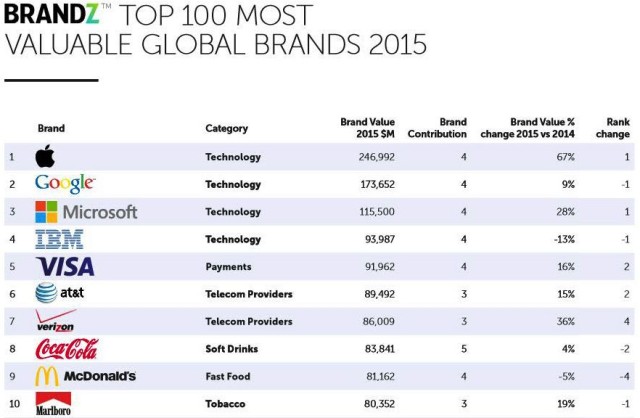 “Apple continues to ‘own’ its category by innovating and leading the curve in a way that generates real benefits for consumers,” says Doreen Wang, Millward Brown’s Global Head of BrandZ. “It meets their rational and emotional needs, and makes life easier in a fun and relevant way. Apple is clear on what it stands for, and never stops refreshing its message to sustain the difference that makes it so desirable.”

Third and fourth place in the ranking were taken by Microsoft and IBM respectively, while the rest of the top 10 brands included names such as Coca-Cola, AT&T, Visa, and Verizon.

Technology companies were the fastest-growing category, and Facebook (despite not cracking the top 10) saw the biggest year-on-year growth at 99 percent due to its acquisition of social apps like Instagram and WhatsApp. Chinese brands also experienced a big boost in both number and value.

The BrandZ Top 100 Most Valuable Global Brands list is based on a combination of “the views of potential and current buyers of a brand, alongside financial data” in order to calculate brand value.

I’m normally a bit skeptical of these kind of surveys, since they can tend toward using totally nonsensical metrics. For example, one similar brand value survey rates on the (in some cases totally imaginary) royalty rate a company would presumably charge for letting someone use its branding.

In the case of the 2015 BrandZ Top 100, I’d suggest that Apple is back in its rightful place, but that people shouldn’t put too much stock in it. After all, it was only last year that we were told by the same company how far ahead Google was in terms of innovation, thanks to technologies like Google Glass.

With the first public release of Google Glass now consigned to the tech scrap heap, few people would argue the same thing in 2015. Don’t get me wrong: I don’t think anything close to the Google Glass debacle will occur for Apple between now and 2016, but it’s still worth taking these studies with a pinch of salt for just that reason.