Enough reports have accumulated for us to say with fair certainty that there will be a larger iPad ‘Pro’ in the first half of next year, although nothing super concrete has been agreed upon regarding specs.

Now Japanese magazine Mac Fan has published what it claims are schematics for the “iPad Air Plus,” but here’s to hoping Apple doesn’t actually give its rumored 12.2-inch tablet that name. 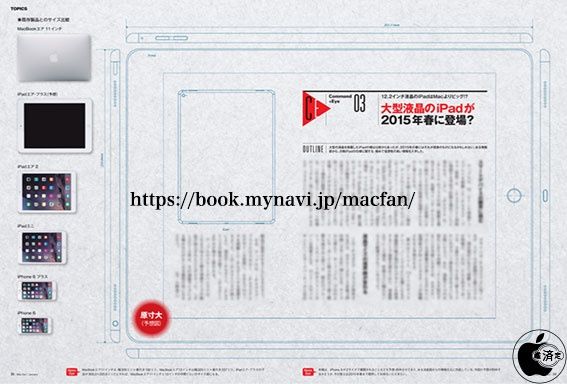 The tablet’s 12.2-inch LCD display will be allegedly powered by a new A9 processor, which contrasts with other reports saying Apple will use the same A8X in the iPad Air 2. It would make sense for Apple to debut a new, top-of-the-line chip if the larger iPad is indeed pitched as more of a workhorse, laptop-like device.

Apple is expected to debut the new iPad around April or June of next year, according to Mac Fan. Reports originally said that a release was planned for this year, but The Wall Street Journal claimed that Apple postponed manufacturing to focus on iPhone 6 demand through the holidays. Whether that last bit is true or not, it’s looking like a spring iPad announcement is very likely.

Beyond the iPad Air Plus details (again, that name is ew), Mac Fan says the tablet will look similar to the latest iPad Air 2 and iPad mini 3. Apple is said to be working on an iPad mini 4 with the A8X chip, and Mac Fan believes the third-gen model will be discontinued when that comes out.