It’s official: kids love the iPad more than they do Oreo cookies. According to the “2014 Young Love” study — an annual survey carried out by leading youth and family research firm Smarty Pants — the iPad beat out 255 other brands (including Disney, Nickelodeon, Toys”R”Us, McDonald’s and YouTube) to be named the #1 brand among children aged 6-12.

The survey was conducted among a representative sample of U.S. households, with a total of 256 consumer brands evaluated as part of a three-month study of 6,661 children and their parents. Scores were based on a composite scale of 0-1,000 based on brand awareness, love, and popularity.

The top ten brands can be seen below: 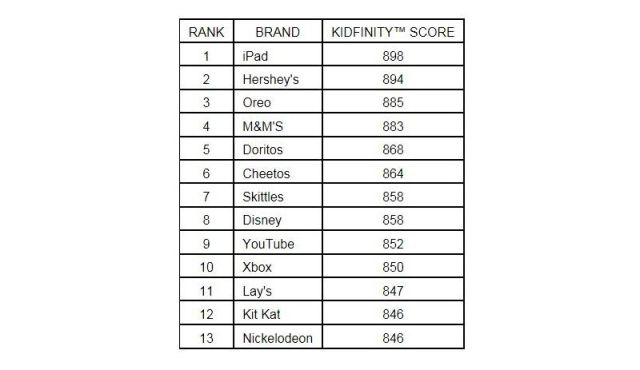 “iPad’s number one status among kids represents the culmination of the ‘tablet takeover’ – a movement from shared screens and TV network dominance to curated content on personal devices,” Wynne Tyree, president of Smarty Pants, said in his explanation of Apple’s win. “Kids increasingly turn to iPad for games, TV shows, videos, books, homework help and communicating with friends and family.”

While there has been plenty of discussion over how suitable the iPad is for younger children — and even Steve Jobs steered clear of giving his children unlimited access to the iOS tablet — it has nonetheless become a popular device among young people.

Seeing as it was only launched in 2010, its dominance has taken just 5 years to achieve, with an initial ranking of 109 through to its position today.

“Early on, it captured the hearts of tweens and middle and upper class families, but iPad is now an indispensable part of childhood for the masses,” Tyree explains.

Who knows, maybe Apple should start producing a few more ads along these lines: