Apple is diving wrists first into the fashion industry next year with its first ever timepiece, and what better way for the Apple Watch strut its stuff for the public than at in front of the worlds most intolerable fashionistas at fashion week in Paris?

The first public showing of the Apple Watch might take place tomorrow, reports MacPlus, which spotted an announcement from the Parisian fashion boutique Colette (which sells a ton of fashionable watches), advertising a one day only experience in partnership with Apple.

Take a look at the subtle Apple Watch hint in the invite below: 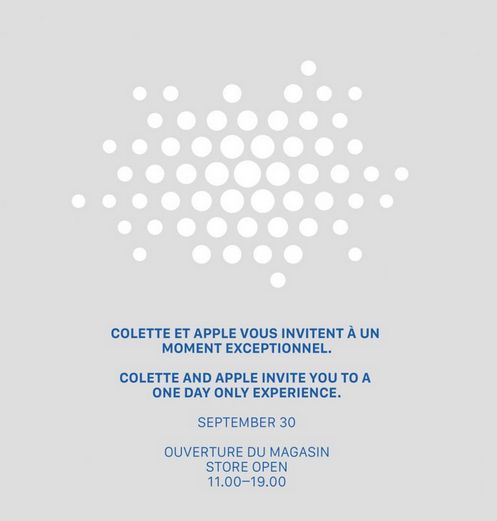 Although the invite is just grey and white, the dots do mimic the circular app interface UI of the Apple Watch. The event will take place at the company’s temple to fashion on 213 rue Saint-Honoré from 11AM – 7PM.

There’s no specific mention of the Apple Watch, but with the biggest names in fashion camping out in Paris until October 1st to show off their upcoming wares, it’s almost a sure bet that Apple’s gold faced beauty will make a stunning appearance at the event.

Number of comments on this postLeave a comment
Posted in: News Tagged: Apple Watch, Paris