The iPhone 6 Plus bends because it’s thin and aluminium, right? Wrong, according to a poster on Imgur, who has analysed photos of the contorting iPhone phablet and places the blame instead on a badly-designed metal reinforcement.

With only 9 reported cases of bendy iPhone 6 Plus devices in the wild, user alleras4 based his theory on the video from Unbox Therapy, which has racked up 30 million views since being posted online.

What he notices is that, even though forces aren’t being applied evenly to the phone but rather at one side, only one point of the profile gives in to bending — with evident stretching of the upper portion of the iPhone 6 Plus profile, but nothing in the way of compression in the bottom portion.

alleras4 even adds an image, using red and yellow arrow to represent the forces being applied and how they affect the profile of the phone, while a blue graph represents the moment caused by the forces. The picture can be seen below:

By comparing that damage to the iFixit teardown, it is possible to look at the inner design of the case and conclude that the weak point is a metal insert screw located just behind the volume buttons.

“It’s not about how much force must be applied and if a pocket will do the trick or not. It’s just that under a particular type of flexing, the phone is prone to bend mainly because a metal insert meant to reinforce instead spins in an axis too close to the critical point. If they were further apart allowing better support to counter the flexing and not [spinning], it would make it more resistant.”

The idea explains why Apple’s stress-testing techniques failed to discover the alleged fault, since unlike Unbox Therapy’s manual approach to bending, Apple applied equal force across the phone’s entire profile, rather than one side which was what was necessary to start the bending process. 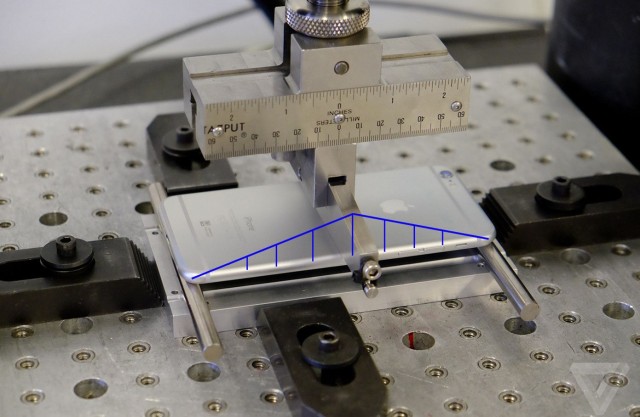 While it’s all just a theory, it’s definitely a compelling one — and one that’s good news for fans of slimline smartphones, since it means that Apple won’t have to beef up its future iPhones to avoid a Bendgate part II.

We’ve reached out to Apple and will update the story if and when we hear something.