Months of rumors suggested Apple’s wearable device would be a health-centric powerhouse capable of predicting heart attacks, analyzing sweat and other miraculous feats. But in reality, the Apple Watch seems more like a sexy, supercharged fitness tracker than a full-fledged medical device.

Still, this is an ambitious first-generation device — a crucial step forward for wearables that points the way toward the comprehensive health and fitness device the Apple Watch could become.

“The fitness side of things looks really far along,” says Bruce Tognazzini, a UI expert and influential former Apple employee. “There’s been a whole lot of work done on the sensors, and it looks like it’ll work really effectively in conjunction with the iPhone. I think Apple’s got a very thorough understanding of what is necessary to track fitness.”

The fitness-related sensors and apps, capable of tracking the wearer’s steps and cataloging daily exercise, are where you’d expect them to be after a decade of fine-tuning for the iPhone. However, the health side of the equation appears to be less of a priority. The first-generation Apple Watch will apparently be able to track heart rate, but little else.

There’s a clear reason for that.

“The health side of things is much more difficult, and I’m yet to be convinced that the sensors are really there yet,” Tognazzini says. “There are currently investigations going on into measuring blood pressure and blood-sugar level using noninvasive methods, but none of those were announced for the Apple Watch.”

Apple’s long-awaited entry into the wearables market — viewed by some as a make-or-break event for the category — comes at a time when fitness trackers are becoming commonplace, but smartwatch sales remain anemic. While the Apple Watch at first won’t meet the wild expectations of the rumor mill, Cupertino’s new WatchKit and HealthKit APIs will likely create an irresistibly sticky ecosystem.

Fitness is leading the way in terms of the Apple Watch’s capabilities, with the majority of the applications described in Tuesday’s product unveiling falling firmly into that camp. As explained by Tim Cook and Co., the device can count your steps and calories burned, measure how much activity you’ve done in a day, and even tell you whether you’ve stood up recently.

“The health-tracking looks to be a better user experience than a Fitbit is, just rolled into the Apple Watch,” says Abraham Farag, Apple’s former Senior Mechanical Engineer of Product Design, speaking with Cult of Mac. 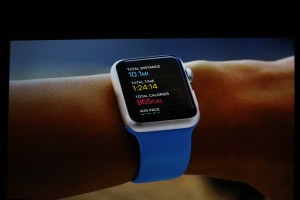 More exciting still is the suggestion that the Apple Watch will “learn” info about the wearer and suggest customized fitness goals as a way of charting long-term progress. This information will be fed back into Apple’s Health app for the iPhone and iPad for easy review and analysis.

When it comes to more extensive sensors that could be added to future versions, Apple’s not lacking employees for the job. The mobile health field is one of the fastest growing and most exciting in tech, and Apple has spent the past several years hiring experts from the biotech industry, poaching many of them from medical sensor companies.

Also conspicuous in its absence during Tuesday’s presentation was any mention of Food and Drug Administration approval, something that was previously cited as a possible factor delaying Apple’s wearable. While lack of FDA approval might sound like a nitpick about an otherwise flawless presentation, it’s a key step that would allow the Apple Watch to be certified as a medical, rather than a wellness, device.

There could be any number of reasons for this, but it is something Apple would do well to focus on — not least because it would give the Apple Watch a clear advantage over its rivals. With Apple currently working with healthcare partners like Mayo Clinic, Mount Sinai and John Hopkins to establish HealthKit in their facilities, FDA approval might also lead to the Apple Watch being adopted by medical practitioners as well as fitness buffs.

“One of my [primary] concerns is accuracy, as my research shows that the health and fitness data that a lot of activity trackers show users is not always 100 percent accurate,” says Maneesh Juneja, a digital health futurist who has delivered a TED talk about data-driven medicine. Third-party apps, too, will need to be carefully vetted to ensure they provide accurate data.

With Apple behind it, however, the Apple Watch could finally be the product that pushes mobile health out of the research labs and hospitals and into the homes of ordinary people.

“Given Apple’s ability to charm the masses with their products in the past, the new watch may be the consumer product that does make mobile health monitoring acceptable in the public’s eyes, and opens the gate for better innovations in years to come,” Juneja says.

Certainly this is what Apple is banking on. The company is expected to bring its “halo effect” to achieve sales comparable to at least a device like the iPad. Embracing the mobile health field will certainly help.

It’s no secret that the potential health-tracking applications of the Apple Watch appealed to Tim Cook, a fitness fanatic and outdoor enthusiast who apparently devours energy bars by the bucketload during meetings. A recent profile in The New York Times said the Apple CEO is most interested in a smartwatch that will let users “monitor heart rate and other vital measures, thus improving health and limiting doctor visits.”

In that regard, Apple hasn’t disappointed. The tech world is focused on wearables and Cook can sleep well, knowing that once again his company has gotten the world excited about Apple’s innovation in new product categories.

The people who probably can’t sleep well? The producers of other fitness wearables, who may suddenly be considering themselves well and truly Sherlocked.

“The Fitbits, Pebbles and Samsung smartwatches of the world will have to sharpen their focus to continue to sell products against this new Apple Watch,” says Abraham Farag.

One thing’s for sure: The wearables game just got upped.