Apple might reveal its first ever phablet next week with the 5.5-inch iPhone 6, and while many Apple fanboys question the need for an iPhone the size of a dinner plate, IDC’s latest market projections reveal Apple is about to get in on the phablet craze at the perfect time.

Over the next four years phablet sales are expected to grow more than any other smartphone, tablet, or PC category. Worldwide phablet shipments are will pass portable PCs by the end of 2014 with 175 million units sold, but that number will to explode to 318 million units in 2015, making smartphones with screen sizes from 5.5 to less than 7 inches more popular than the tablets that spawned them. 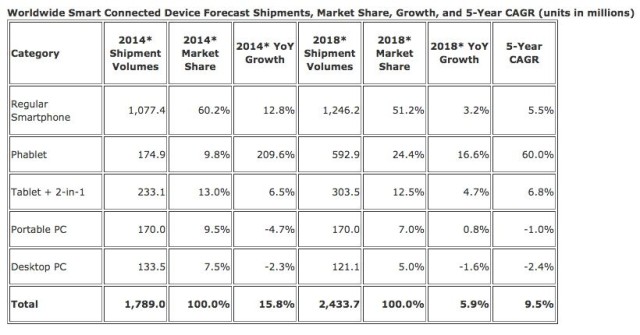 Phablets are still a relatively new device category and only started to command marketshare in 2012, but as consumers move away from small screen tablets, the big screen smartphones are expected to represent 32.2% of the global smartphone market in 2018 with nearly 593 million units sold.

Apple jumping into the space is expected to bring even more attention to the phablet category, making large smartphone screens the norm. The 5.5-inch iPhone 6 will reportedly launch later this fall with sapphire glass for its giant display, as well as new improvements to the camera, TouchID, an A8 processor, and a new mobile payments system.