According to new research from market intelligence firm ABI Research, the iPhone was the world’s most popular smartphone in Q1 2014, leaving competitors in the dust as the top-selling handset globally.

Despite ripping off ideas, paying celebrities to endorse their products, and having a confusing matrix of dozens of smartphones on the market, Samsung was unable to capture the no. 1 spot from Cupertino — with Apple’s flagship iPhone 5s 16GB coming in at the premier position. 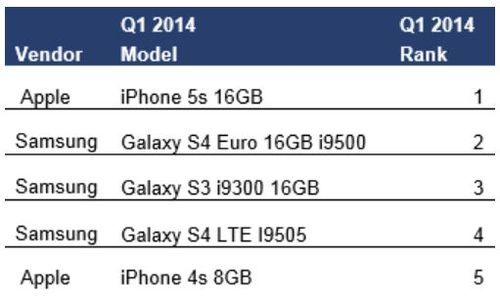 That’s not the only good news for Apple, either. The iPhone 4s 8GB model interestingly rounds out ABI’s top five when it comes to popularity, demonstrating the kind of long and profitable product lifecycle that most smartphone vendors can only dream about.

The rest of the top 20 models are made up of Sony, LG, and for the first time ever, Xiaomi — while Huawei dropped out of the rankings.

This news comes off the back of another similarly optimistic recent report, indicating that the iPhone is the most popular smartphone in the United States — capturing 41.9 percent of the market. All in all, not a bad day to be Tim Cook!