If you’ve been looking to jailbreak iOS 7.1.1 and you have a Mac, then check out the new version of Pangu released today.

The Chinese team of hackers behind the tool dropped their jailbreak for iOS 7.1.x out of the blue last week, but until today it could only be used on Windows. Not only is there now an OS X version, but the interface has been rewritten in English.

Like the Evasi0n jailbreak for iOS 7, using Pangu is pretty straightforward once you download the tool. One weird thing you need for the jailbreak to work is to adjust your device’s internal date in Settings to June 2nd and turn off the “Set Automatically” option. The tool will walk you through the process as you jailbreak. 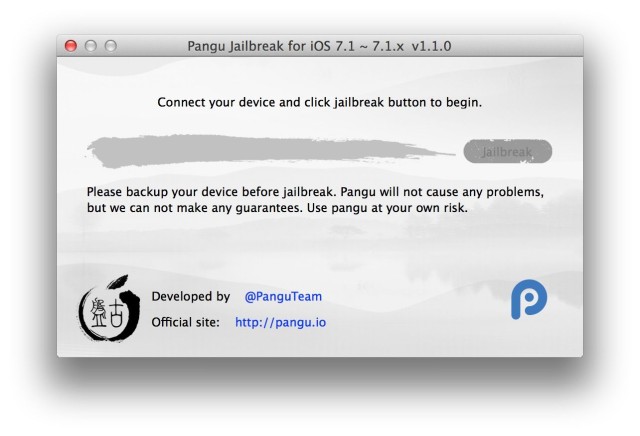 Non-Chinese users won’t have the shady Cydia repo for pirated apps installed anymore in this newest Pangu release. The Evasi0n jailbreak, which doesn’t work past iOS 7.0.6, came under fire when it was first released for also pre-packing a source for pirated software aimed at the Chinese market.

Although Pangu does work as advertised and contains no malware, the way it was developed raises some eyebrows. There have been claims that valuable iOS exploits were unnecessarily burned and/or stolen, which could mean that a future iOS 8 jailbreak will take much longer than expected.

If you’re on the fence about jailbreaking, look at it this way: iOS 8 will likely be out by September, so you’ve only got a couple months left on iOS 7 at the most. If there are some tweaks you can’t live without for that long, then do it. Otherwise, just wait for iOS 8.