Hearthstone: Heroes of Warcraft is a digital collectible card game in the vein of Magic: The Gathering, only set in the high-fantasy World of Warcraft universe. The Mac and PC version came out last month after an extended open beta period.

What may not be apparent from the above is that Hearthstone is hands down the best card battler I’ve ever played. Putting it on iPad makes it that much more habit-forming. The game is full of awesome and bad Scottish accents, which makes it all the better. (“UUUUUUUUUther versus Jaaaaaaynuh.”)

It’s really not fair — I was just starting to leave the iPad at home in favor of only the Macbook Pro in my bag. Now I need to take the tablet with me once again.

The iPad version of Hearthstone is a pitch-perfect rendition of the very same game you can play on your Mac, yet effortlessly enabled for a touchscreen. Launching the app on my iPad 3, and then on my iPad mini, I was treated to the same dramatic trailer as you can see below.

You’ll need to give up 655 MB of space on your device and download it only over Wi-Fi, but that’s a small price to pay for such a fantastically balanced game. The matches play out with a variety of cards in your deck and hand. You play one other player at a time, and in contrast to other card games like this, you never have to worry about playing cards to build energy up. In Hearthstone, each turn nets you progressively more energy, which then lets you play higher and higher value cards.

You’ll choose a hero class (mage, druid, priest, and others) to represent you in your matches, each with its own benefits and weaknesses. Part of the strategy here is learning how to best play each hero character with the various cards you have in your deck. Once you’ve leveled up enough and purchased more cards with your in-game gold, you can customize those decks to be just that much more competitive.

The goal here is to whittle your opponent’s hero down to zero health points while guarding against them doing the same to you. Each match is turn-based, with you laying down different cards, each with their own energy cost. Each card you lay down has it’s own special attack, spell effect, or defensive capabilities. The clever dance involved in playing a match can feel as elegant as chess or as brutal as an action first-person shooter game, depending on your relative skill level.

Each match gets you experience points, which are used to match you up with other players of similar skill. Every day, the game provides specific objectives to attain, like winning a certain number of matches with a certain hero. 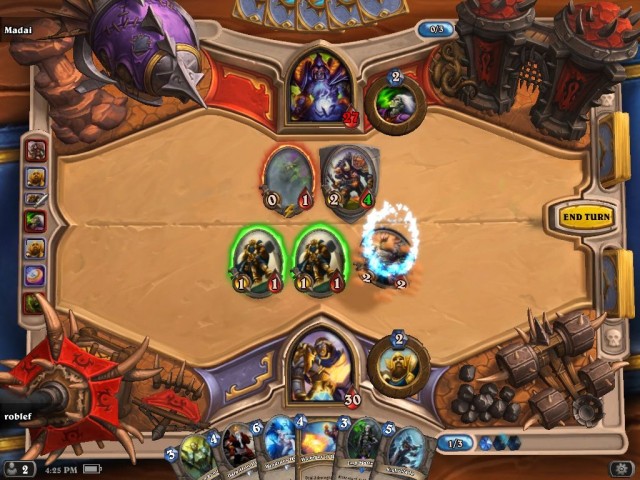 If it all sounds terribly complicated, have no fear: you can play against computer-controlled bots for as long as you like, and you’ll earn cards to fully complete your deck along the way for each new hero character you try out. It’s worth playing through all of these matches just to get a sense of how the game plays.

Dropping into the game on iOS was simple. The iPad is the most friction-free way of playing a match or two (or fourteen), you just simply login to your Blizzard Battle Net account and you’re playing. As I’ve been card-battling the Mac side of things the last month or so, I was impressed by the process; within seconds I had all my customized card decks ready to go and was out and busting some Druid butt in no time at all.

As compared to the Mac version of Hearthstone, anywhere you’d click or drag to play the game, you imply tap and swipe. The only issue here is that when trying to read a card to get the fullest information on what it does, you need to tap an hold, whereas on the Mac version you can click and let go of the mouse pad. That niggling issue aside, the touchscreen controls are seamless.

As an extra plus, you’ll get a free pack of cards just for playing Hearthstone on the iPad — something that usually costs in-game gold. The free-to-play mechanics are among the best I’ve seen. There’s no pay-to-win here; you can only purchase the same packs as you can earn with in-app gold, which keeps things fair as possible.

The music and sound effects are, as on the Mac version, culled from the many versions of Warcraft over the years. When you’ve run out of energy during your turn, for example, you’ll hear the voice of the Orc peon from the original Warcraft games saying, “Job done!” in a cheery Cockney accent. It’s a delightful bit of fan service, as are all the music and other sound effects included in the game, including several from Warcraft II: Tides of Darkness. 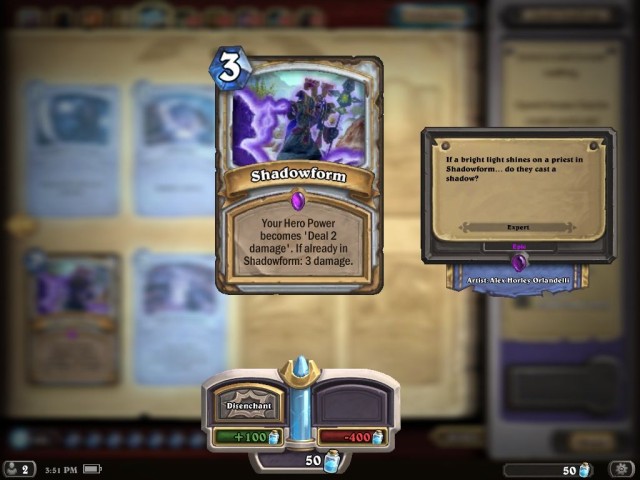 There’s even more to do than play matches, like the card crafting system that advanced players will find a ton of interest in sinking their time into. The cards you earn through matches or grab via in-app purchase can be created using “dust,” which can be created by deconstructing cards you might not want. For those of a competitive streak, this is the main way to start winning matches at the higher levels, but it’s not for the faint of heart; the complexity ramps up quite a bit here.

Bottom line, Hearthstone: Heroes of Warcraft is a brilliantly designed digital card battling game and really should be tried by anyone with an iPad who has even a small bit of interest in the genre. The game is easy to learn and hard to master, like most worthwhile board or video games, and the iPad version is as stunning an implementation of a digital card game as the Mac-based one is.

Give Hearthstone: Heroes of Warcraft a try, it’s free to download and you can get a ton of mileage out of the gameplay without ever spending a dime. Chances are, though, once you get your groove on, you’ll want to start buying packs of cards just to see what you can do with them.

If that’s not enough to warrant adding the iPad back to your mobile office kit, i don’t know what is.