Apple TV users in the U.S. received a smackdown early Monday in the form of a the WWE’s new 24/7 streaming channel.

After being revealed at CES this year, wrestling fans can now watch all the brutality and drama the WWE has to offer with its live streaming network that includes access to pay-per-view events, reality shows, documentaries, and classic matches.

WWE is offering fans a free one week trial. If you want a subscription it will set you back $59.99 for six months. The WWE Network will also be available Android, iOS, Roku, Playstation 3 & 4 as well as Xbox 360 and Xbox One. 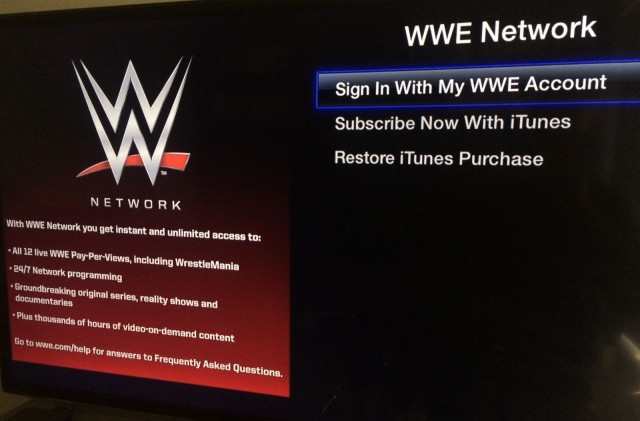 Boasting over 1,500 hours of video available on demand, the the WWE network is also hoping to offer an interactive second screen experience via the WWE App that is currently used for the Raw and SmackDown TV programs.

Hulkamaniacs can sign up for the service via iTunes or WWE’s website. Those outside the U.S.are out of luck, but you won’t have to wait long for all the sweat and spandex to burst onto your screen as the company hopes to launch in the UK, Canada, Australia, New Zealand, Singapore, Hong Kong on the Nordics by the end of 2014.