The inevitable fate of all popular mascots to eventually end up in a go kart. Take a look at Mario, Crash Bandicoot, Sonic, and many other iconic video game mascot characters and you’ll find they’ve all squished themselves into a car at some point. Well, now the Angry Birds are, too.

Angry Birds Go is a free-to-play karting adventure full of repetition and cool-down meters. Unlocking aesthetically pleasing carts means putting in real money, and your spirited birdy racers get tired after a short while. Beyond that, Go is a completely average racer. 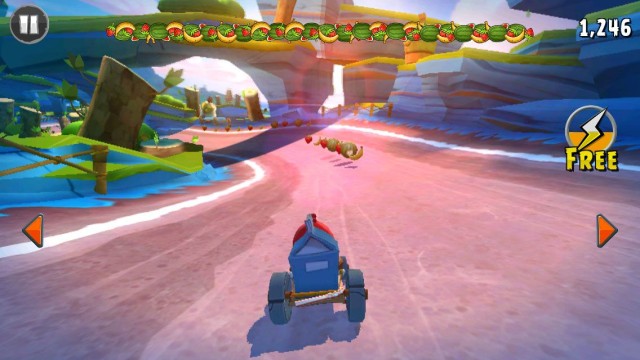 At the beginning of every round, you fire your racer from a slingshot. Tracks are very short and have glaringly obvious alternative paths scattered throughout them. Think of it as more of a downhill drag race than a fully functional kart game. Each race is a single lap as well, so this is an exercise in downhill speed accumulation than actual competition. Sure, you’re racing pigs and eventually other birds (when you’re attempting to unlock new characters) but the challenge is minimal at best. If you can tilt or tap your bird-kart into coins and avoid hitting walls, you’re probably going to win. Doubly so if you managed to take the obvious alternate route in the level. 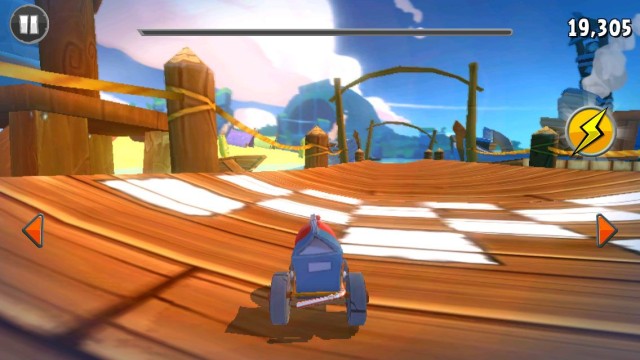 Angry Birds Go is completely average. It is quick, free-to-play, and likely set to appeal to kids who just have to do more with their Angry Birds. If you bought the Angry Birds-branded Jenga set, you can use a code in that to unlock Jenga in Go, but that’s the extent of the non-racing options. You could do worse than Angry Birds Go, but to do so you’ll need to abandon the world of easily identified mascots and plunge head-first into the world of suspiciously-named iOS free-to-play games.