SEATTLE, PAX 2013 – We stopped by the booth for interactive radio drama with voices that most gamers here at the Penny Arcade Expo (PAX) in Seattle this weekend will know, including Rob Wiethoff (Red Dead Redemption), Logan Cunningham (Bastion), Sarah Elmaleh (Skills of the Shogun), and Chris Ciulla (Fallout: New Vegas).

We got to sample the prologue and first episode of the game today at the PAX booth on the show floor in the convention center, where we spoke with Jonathan Myers about the innovative game. As you can hear in the launch trailer above, the voice work and the music bring you right into the action. 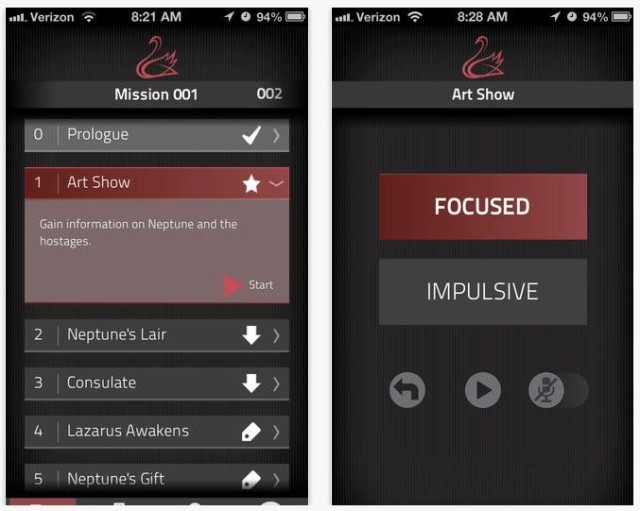 Myers told us that the game is a free download, with the prologue coming for free. Each subsequent episode will cost $1.99, and provides about 15 to 20 minutes of action-packed audio drama, during which you’ll respond to prompts to make choices, using either a tap on the screen or a spoken command. Your choices will be categorized and shown to you at the end of each episode, giving you an idea of the kind of character you’ve created.

“We wanted it to be casually accessible for the broadest audience appeal,” said Myers, “but we’ve also created some side quest episodes that have a deeper choice mechanic, for gamers that want a bit more challenge.”

Codename Cygnus is out now in the App Store for the low, low price of nothing. Give it a shot and let us know what you think in the comments below.