PopCap has finally gotten around to releasing the new zombie game that everyone and their grandmother has been waiting for — Plants vs Zombies 2: It’s About Time.

It’s been three long years since we were swept away with the original Plants vs Zombies, but we’re happy to say that Plants vs Zombies 2  is just as fun and addictive as ever, if not more so. Yes, you still plant sunflowers, harvest sun, and then use that to get more plants to destroy armies of zombies. But even though the gameplay is still the same, the adventure is more fun than ever. 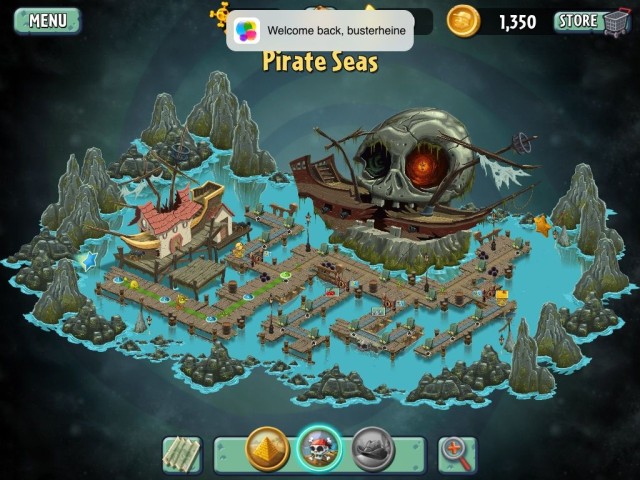 Once again players are joined by Crazy Dave from the first game, except now he has a time-traveling RV that can transport you to three different time periods on his Time-Space Taco Map: Ancient Egypt, Pirate Seas, and Wild West. To advance to new time periods, though, players have to collect stars by beating levels and accomplishing objectives.

Each time period comes with over 20 levels full of new zombies to destroy, which would be fun enough as is, but this go around, players will have to repeat levels later with new puzzles to gain more stars and unlock new areas of the map. Some of the levels have to be replayed three times, with each new attempt bringing new objectives to earn stars.

You can also go back and replay levels to find keys that unlock new branches of your map as well, leaving players with even more gameplay than the original. With so many levels to beat, you’d think that dropping plants on a board for hours on end would get boring, but PopCap has done a great job of mixing gameplay up by including new mini-games. 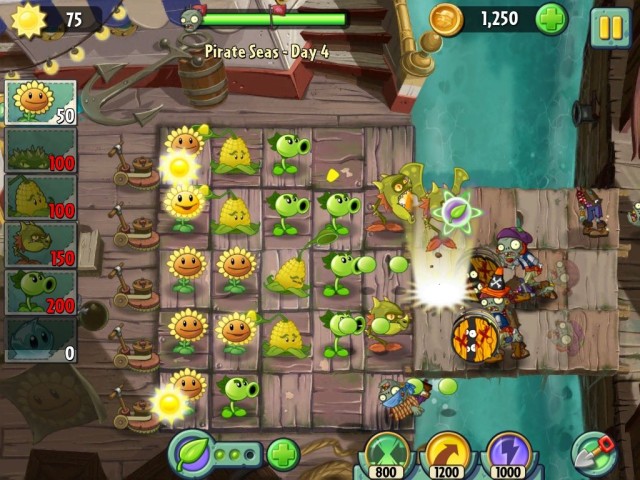 To help you defend your home in the crazy new worlds, Crazy Dave gives you a new power-up, called Plant Food, that the zombies drop and can be dragged over to one of your plants to activate its temporary super-powers. You can also save up to 3 bottles of plant food to use whenever you’re facing a big wave.

Coins play a different role in the worlds of Plants vs Zombies 2 than they did in the original. Rather than being used to unlock plants, the new game comes with three power-ups that can be purchased in the heat of battle using coins, granting the player phenomenal cosmic powers long enough wipe the board clean.

The new power-ups include Power Pinch, Power Toss, and Power Zap, which can be activated at the price of 800, 1000, and 1200 coins, depending on which power you want. All three are incredibly powerful and incredibly pricey, but you can usually beat levels without them.

Along with the big  new gameplay features, PopCap tossed in a few smaller features that make conquering PvZ2 a delight. Now the game syncs your progress through GameCenter so you can beat a few levels on your iPhone, and then pick up right where you left off on your iPad. They’ve also included slots for five different player profiles, so your spouse or kids can play on your device too and progress at their own pace without messing up your game. 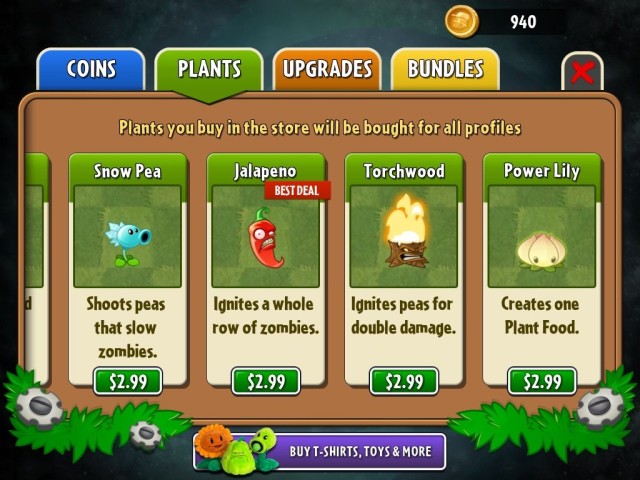 When PopCap made the announcement that Plants vs Zombies 2 would be ‘free-to-play’, a lot of PvZ fans were worried the game would try to squeeze every dollar it could from you to open up content, but that’s not at all the case here.

Yes, you can buy coins, plants, upgrades and other bundles that will make the game easier for you, but none of them are worth it. You can beat the entire game without spending a penny, and you unlock different plants and upgrades along the way.

Ads do pop up every so often after beating a level, but nothing obtrusive that ruins gameplay. The only reason to spend money in PvZ2 is if you’re nostalgic for some of the plants from the original, or you just need a mountain of coins to dominate a level with your super powers because you’re too lazy to beat it the regular way.