AT&T’s new early upgrade program is “calculating, sneaky, underhanded,” according to a new print ad from T-Mobile that will be published in USA Today.

AT&T Next is designed to let customers upgrade their smartphone more often — once every 12 months — and it is a direct competitor to T-Mobile’s new Jump plan. But T-Mobile has been quick to make its feelings about Next clear, accusing AT&T of trying to take more money from its customers.

The ad, which will be published today, the same day AT&T reports its quarterly earnings, features a quote from a recent article by The Verge that reads: “AT&T’s reaction to T-Mobile’s transparency is to be more deceptive than ever.” 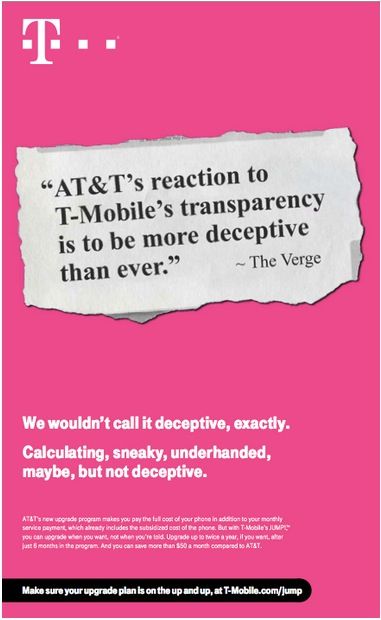 T-Mobile feels that customers aren’t benefiting from AT&T’s Next plan because the company has not lowered its monthly rates — something T-Mobile has done.

“There are real and material differences between what we are doing and the so-called upgrade programs that AT&T and Verizon are doing,” T-Mobile marketing chief Mike Sievert said in a telephone interview with AllThingsD on Monday.

T-Mobile’s program can save you money, Sievert said, while its competitors “are a mechanism for AT&T and Verizon to take more money from customers than even those companies have ever done before.”

T-Mobile has enjoyed trashing its competitors since it did away with subsidies and announced its new “Uncarrier” plans back in March. “Carriers are really nice to you… once every 23 months,” CEO John Legere said during a presentation in New York City on March 26.

”This is the biggest crock of shit in my life. Do you have any idea how much you’re paying?”

Legere also called for AT&T, Verizon, and Sprint to “stop the bullshit,” and added, “customers don’t need another AT&T. Customers need someone to stop acting like AT&T.”

AllThingsD reports that T-Mobile will run similar print ads on Wednesday that will take aim at Verizon’s early upgrade plan.