Mailbox, the hugely popular third-party Gmail client for iOS that has changed the way we manage our emails, is now available on the iPad. The update comes just over three months after Mailbox made its debut on the iPhone, and you’ll be pleased to know that you no longer have to wait in line to use it.

Mailbox for iPad looks a lot like Apple’s built-in Mail app in landscape mode; it displays a list of emails on the left side of the page, then gives you a window in which to read them on the right. You can use the buttons at the top of the page to switch between your inbox, your archive, and your “later” list.

Tap the menu button and the messages list will slide over to reveal the rest of your folders, including trash and sent, as well as the settings and help buttons. Mailbox is designed to work in landscape mode only, so you cannot use it in portrait. 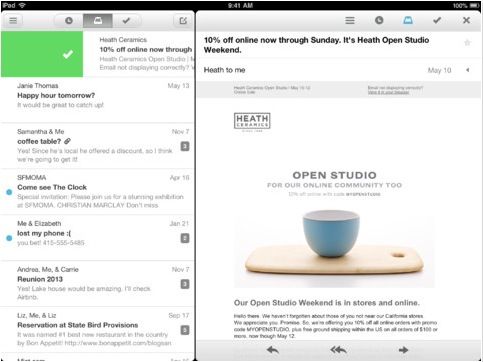 If you’re a Mailbox user on iPhone, then the rest of the app and its features will already be familiar to you. All of Mailbox’s unique features are there, including the ability to save emails to a special list for actioning later. You can even specify when you’d like to action them and Mailbox will make sure you don’t forget.

Mailbox for iPad is pretty terrific from what I’ve experienced so far, but I do have one gripe with it: When composing a new email, or replying to one, it presents you with a tiny little window in the middle of the display. Why doesn’t the app take advantage of the iPad’s big screen? 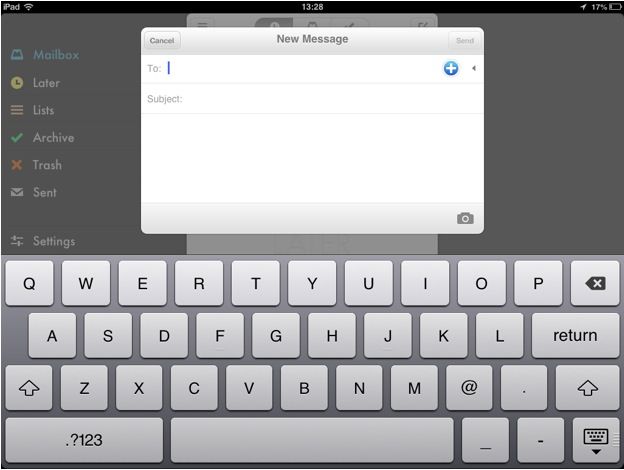 As always, Mailbox is completely free, and it supports up to five Gmail accounts. The team behind it, which is now owned by Dropbox, promises that support for other email services will come later on, as will Mailbox clients for other platforms, including Android.