Apple looks to be building another retail store in Beijing, which could open its doors in time for the launch of new iPhones and iPads this fall. Construction has begun on a building that bears a strong resemblance to a typical Apple retail outlet in Beijing’s China Central Place Shopping Center.

The store was first spotted by the Beijing Business Daily, which describes it as a two-story building that occupies around 500 square meters. The picture below, which shows the building covered in a protective construction material, is the only one we currently have of the location at the moment. 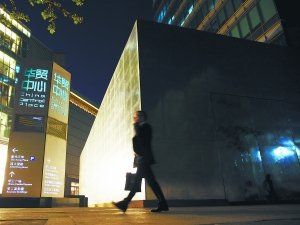 It’s thought the store could open its doors towards the end of this year, possibly in time for Apple’s new iPhones and iPads. Recent rumors have claimed that the Cupertino company will launch a low-cost smartphone aimed at emerging markets, which could prove to be a big seller in China.

Apple CEO Tim Cook has made China a priority since taking over from Steve Jobs, and he recently announced during an Apple earnings call that he intends to double the number of retail stores there within two years. Cook also believes that China will eventually surpass the U.S. as Apple’s largest market.

There’s still a long way to go before that vision becomes a reality, however. Apple claims just 8% of the market share in China, which puts it in fifth place behind local manufacturers like Huawei, Yulong, and Lenovo.

It’s thought, however, that an iPhone deal with China Mobile, the world’s largest carrier, could be a big boost Apple’s market share pretty much overnight.