In response to Samsung’s Galaxy S4 announcement last Thursday, Apple has updated the iPhone 5 pages of its website to remind visitors why people love the iPhone. “Loving it is easy. That’s why so many people do,” the landing page reads, before going on to list all the reasons why the Cupertino company’s smartphone is so popular.

“iPhone owners love their iPhone,” the page reads. “And not just because of the Retina display. Or the amazing camera. Or the long battery life. It’s all those things plus the fact that iPhone is just so easy to use.”

Apple then gives visitors the opportunity to “learn more about why you’ll love an iPhone.” Click the link and you’ll be presented with an entire page that explains “what makes an iPhone unlike anything else.”

Some of those things include eight straight J.D. Power and Associates awards for customer satisfaction, Apple’s attention to detail that allows the iPhone’s sleek aluminum form factor to be so thin and so light within sacrificing features or performance, and iOS, the world’s most advanced mobile operating system (according to Apple).

Apple also mentions the iPhone 5’s impressive battery life, which gives you 8 hours of LTE browsing, and the fact that the handset’s iSight camera is the world’s most popular — at least on Flickr. The page also mentions the 800,000 iPhone apps available in the App Store, Siri, and iCloud. 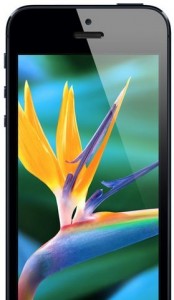 Apple clearly wants to remind visitors to its webpage why they should be choosing the iPhone over competing Android devices, which are becoming a stronger force than ever before. The Galaxy S4, for example, is a hugely impressive smartphone, with a 5-inch display that has a full 1080p resolution, an eight-core processor, and Samsung’s latest Google’s latest Android OS.

The HTC One is also a terrific contender to the iPhone, and its one of only a few Android smartphones that can match the iPhone’s impressive build quality.

Samsung is expected to extend its lead over Apple this year, and the Galaxy S4 will almost certainly be one of a number of handsets that helps the Korean company do that. But Apple won’t roll over easily.

We’ll see an iPhone 5S by the end of the year, of course, and there’s plenty of speculation over a new low-cost iPhone that could help the company compete with rivals like Samsung in emerging markets.