A new Apple patent application purchased by the U.S. Patent & Trademark Office details a new system that may one day allow you to sell or lend on your “used” digital goods, such as iTunes purchases and software you’ve downloaded from the App Store.

Apple details a system that could see used goods sold through their original marketplaces, like those mentioned above, or directly between users.

The patent explains describes how your device could determine whether or not a particular digital item — such as an app, a book, or a song — can be resold, based on criteria put into place by the original publisher. As an example, one film studio might say its movies cannot be resold for at least three months after their release, or that second-hand items must have a minimum price tag.

Your device would also check whether or not a commission is paid back to the online store, or the publisher of the digital goods.

Providing everything checks out, you can then sell on the digital items you no longer have a use for. Ownership is then transferred to the purchaser and they are given authorization to access the content, and you are prevented from accessing those digital items again. 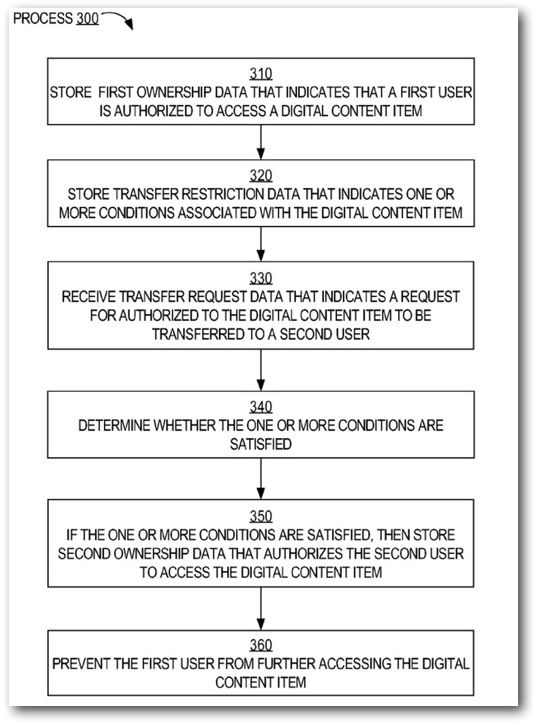 The items you sell don’t need to be stored locally on your device, as the application also describes how the system could work in the cloud. So you could sell your movie collection from your iPhone, even though you don’t own those movies synced to it. And given that most people are likely to use an app on an iOS device to do things like this, working in the cloud is likely the most realistic scenario.

The biggest hurdle in all of this, of course, will be convincing the music labels, the film studios, the publishers, and the developers to allow their digital goods to be sold and resold over and over again. Obviously the second time an item is sold, they’ve not going to receive as much profit for it.

But the system could convince users who have taken to downloading music and movies illegally to buy them second-hand for a lot less. If that’s the case, then the content creators might at least make something from those who would normally just pirate their goods.