There are only thought to be about 50 Apple 1s still in the wild, this is the second one up for auction on eBay in a month.

The last one sold for about $18,000, several thousand over its estimated value, to an anonymous computer collector who also tipped us off about the sale of this 1976 progenitor of the personal computer. The starting bid is $50,000.

It’s pretty much a capsule history of early Apple: the wise person who first bought it for Electric City Radio Supply in Montana kept everything — the invoice, the box (which shows the return address as Steve Jobs’ parents house), a cassette with BASIC,  the operation manual and a typed letter on ring binder paper from Steve Jobs answering questions about it, including how to hook up a keyboard. Even  if you don’t have the cash, the photos are worth checking out. 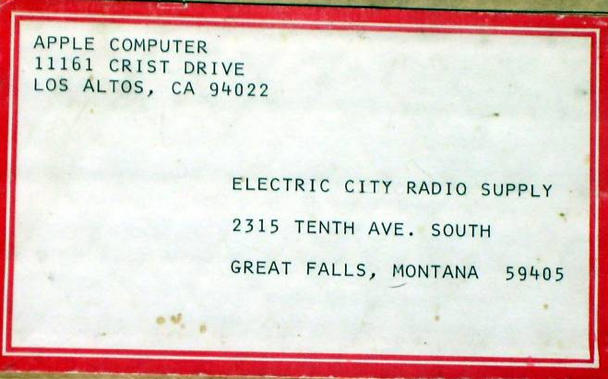 We wrote to the seller, more when we hear back. 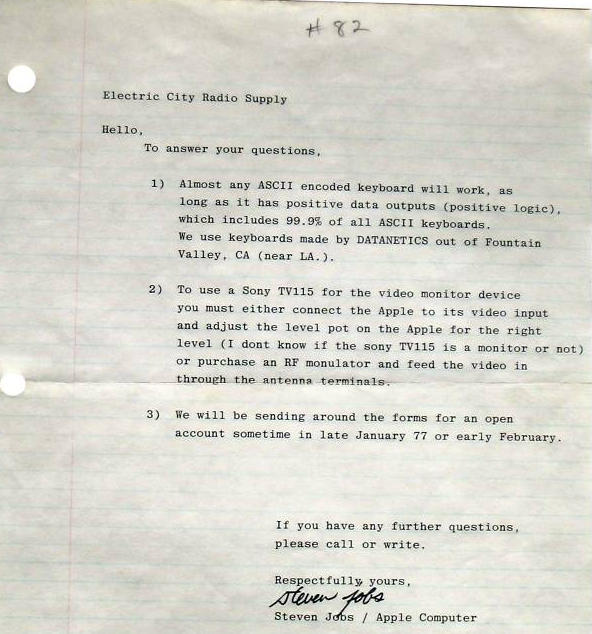 • The computer
Seller notes: This unit has a single addition, a keyboard port added in a mid-80s attempt to get it to boot up.
(When Steve Wozniak saw this unit he told me that the first batches of Apple 1’s used a brand of chip they later replaced because they blew out easily.  He said those chips were on this unit, which is probably why the unit didn’t boot in the mid-80s.)

•    The original shipping box, with Steve Jobs’ parents’ house as a return address
•    The original manual, with schematics to build your own Apple 1
•    The tape interface card
•    The manual for the tape interface
•    A plain Scotch-brand cassette tape with a simply-typed label “BASIC” that came with the unit
•    A letter, signed by Steven Jobs in 1976, explaining connecting a keyboard and monitor, as well as detailing when dealer applications would be available
•    An original full-page glossy advertisement for Apple, included when the Apple 1 computer was shipped
•    Photographs of all prior owners of this unit

The seller lives in Roseville, California, the auction’s running for another five days, until November 18.

Number of comments on this postLeave a comment
Posted in: News Tagged: vintage tech