In addition, MakerBot released a printer API and expects third-party software makers to create software for the iPhone and iPad to run its printers.

“I expect we’ll be building the moon base with them,” said Bre Pettis, MakerBot CEO after introducing the Replicator 2X to a scrum of press. “That’s where it’s going.”


The Replicator 2X is priced at $2,799 and will start shipping in mid-March (you can sign up to preorder it here). It prints at a resolution of 100-microns (which is pretty good for a prosumer 3D printer) and has two extrudes for printing two colors simultaneously.

The company also released MakerWare 1.1 software and Firmware 7.0 updates for its line of printers, including the X2’s predecessor, the Replicator 2.

Whereas the Replicator 2 uses a biodegradeable PLA plastic (made from corn), the 2X is optimized for printing with stronger ABS plastic, which is the most common type of plastic for consumer goods. It can print in multiple colors and multiple kinds of plastic.

Brian surgeons are printing models of tumors to prepare for surgery, and the MakerBot booth is exhibiting a baby breathing monitor built on a Replicator.

“There’s wave after wave of new applications,” he said. “There are new ones every day.”

The Replicator has been hailed by Wired magazine as the machine that will revolutionize manufacturing, taking it from factories to the desktop.

One MakerBot engineer showed off an iPhone case he made himself in about 90 minutes at a cost of a few cents (if you ignore the cost of the $3,000 printer). 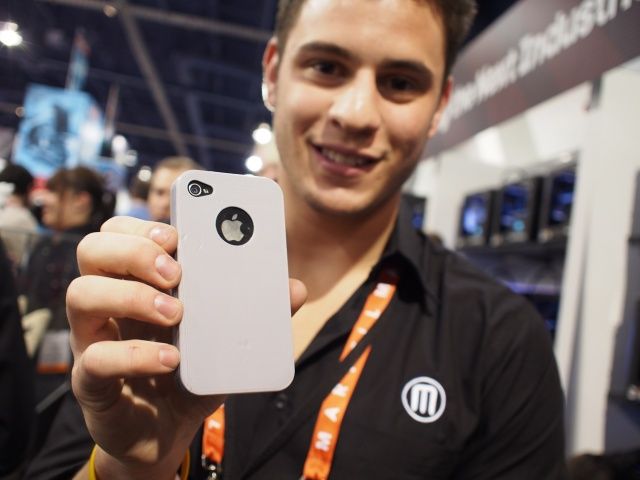 And here is a baby breathing monitor built into a onesie. It connects to an iPhone and will sound a warning if the baby’s breathing becomes irregular. It’s designed for use with babies that suffer from sleep apnea.