LAS VEGAS, CES 2013 – Apple accessory powerhouse iHome unleashed a mighty avalanche of products last night, the lion’s share of which was Bluetooth in nature. Highlights from the deluge include a Bluetooth version of the perennially popular iMH series portable speakers and the quirky iBT44, a Bluetooth boombox — not simply a Bluetooth-equipped speaker that some marketing guru has slapped the term with, but an honest-to-goodness, FM-equipped stereo circa 1983, only covered in rubber. Oh, and there was also a double-Lightning clock-dock. And Bluetooth headphones. And more Bluetooth speakers. And regular speakers.

First, the attention-demanding iBT44 boombox. Actually a retooling of their non-Bluetooth iP4PZ boombox but without the physical dock connector, and a Bluetooth connection in its place. The iHome folks weren’t quite sure whether the little device slot in the unit was big enough for a Samsung Galaxy Note; an iPhone 5 though? No problem. It’ll run on six (six!) D batteries and can charge your device via USB. $200.

Then there’s the iBT88, a Bluetooth version of the iMH-series wired portable speaker sets. The pair sniks together magnetically for transport and comes with its own bag. At $60, they’re $10 more than the wired versions.

Finally, the IDL100 FM stereo clock-dock comes with three separate ways to charge your plethora of devices: two Lightning docks and a USB port for your older, crappier iDevices that don’t have Lightning connections. No Bluetooth on this one, but then, two Lightning docks. And apparently they’re expensive, because the IDL100 is $150.

There were more speakers and headphones; but also, there were other gadget manufacturers, and frankly we didn’t want to spend the entire night speaking with the iHome folks, charming though they may be. 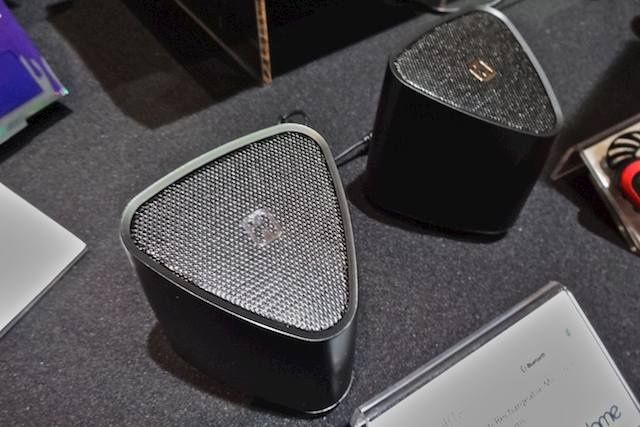